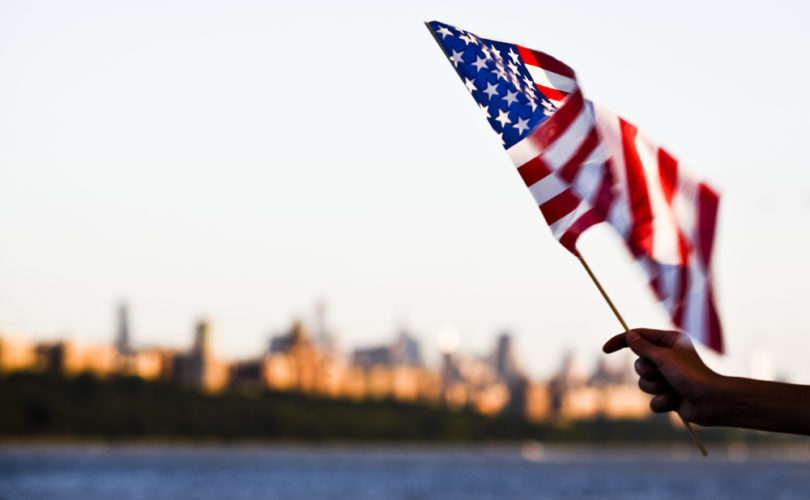 September 28, 2017 (LifeSiteNews) — The current mania for tearing down statues and stifling free speech by cultural ingénues ignorant of history and logic, has reached a stellar absurdity in demands to censure “The Star Spangled Banner” on lame claims that it is racist. If ignorance is bliss, then those who indulge their revisionism, must be in Nirvana.

Francis Scott Key penned the words in 1814, later set to an English song “To Anacreon in Heaven,” a tune that is a challenge to singers, as even Renéee Fleming confessed after performing it at the 2014 Super Bowl. It is often mutilated by rock stars calling attention to themselves by “interpreting” it. Key wrote the words after watching 19 British ships fire more than 1,500 cannon balls, mortar shells and rockets on Baltimore. Key was a slave-owner, which was, sadly, not in contradiction to common practice. But he ordered the manumission of his slaves, and in 1820 he embarked on a seven-year effort pleading before the Supreme Court for the liberation of 300 African slaves captured off the ship “Antelope” along the Florida coast. He also worked with John Quincy Adams in the “Amistad” case to free 53 slaves.

Key’s poem “The Defence of Fort McHenry” which, re-named “The Star-Spangled Banner,” became the national anthem in 1931, was based on verses he composed in 1805 to celebrate the victory over the Muslim slave-trading pirates on the Barbary coast, (“the shores of Tripoli,”). “And pale beam’d the Crescent, its splendor obscured / By the Light of the star-spangled flag of our nation … And the turban’d heads bow’d to the terrible glare … ” John Langdon was a Founding Father who, as first President pro tempore of the Senate, administered the vice-presidential oath of office to John Adams. In 1805 as governor of New Hampshire, he set aside a day in thanksgiving “for the termination of our contest with one of the African powers; the liberation of our fellow-citizens from bondage … ”

Islam, which means “submission,” has never had abolitionists like the Christians Bartolomé de las Casas and William Wilberforce. Muhammed was a slave trader, and the Qur’an devotes five times as much space to regulating labor slavery and sex slavery as it does to prayer. Nearly 200 million slaves, white and black, were sold by Muslim traders over 14 centuries, and almost all the Africans sold to European traders for export to America were enslaved by Muslims. Muslim slavers even raided Ireland in 1631. So many Eastern Europeans were enslaved that the word “slave” itself comes from “Slav.” While lip service is given to abolition in Islamic lands, slavery today is blatant in Sudan, Niger and Mauritania and was not abolished in Saudi Arabia and Yemen until 1962 (under Western pressure). Where is the indignation of protestors here? If revisionists would burlesque the past and mute the voice of reason, they should first recognize that the value of life is secured best by the standard of the Cross and not the Crescent.