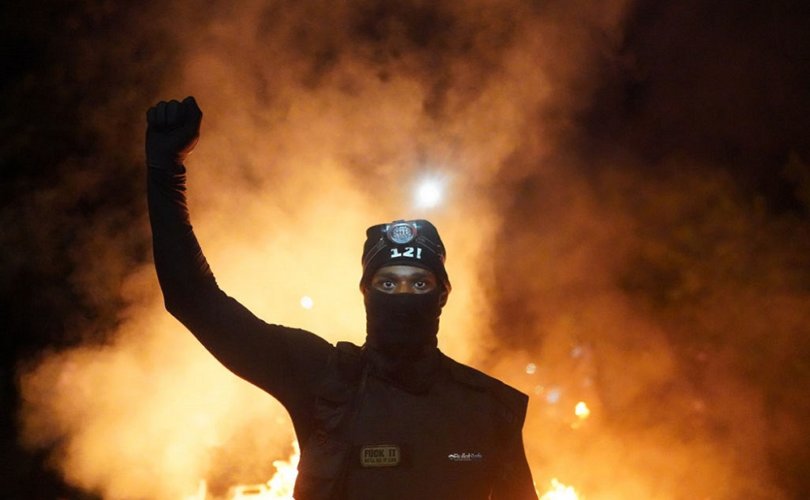 August 24, 2020 (LifeSiteNews) — A drama is unfolding in Portland, Oregon, that bodes ill for the nation. Order and the rule of law are at stake. The Portland plot is not an isolated event. It could well be a trial run for similar shows in cities across the nation.

The media narrative about what is happening in Portland is all wrong. It is written using an old class-struggle script in which angry protesters are victimized by brutal police authority. These rioters, curiously costumed in black garb, are supposedly concerned social warriors fighting for a just cause. The police represent an evil and racist regime.

The real story needs to be told. The false characters should be unmasked. This is a tragedy that must be stopped before it ruins the nation. It is time to act, calling a spade a spade and not dawdling while the nation burns.

Who Are the Individuals on the Streets of Portland?

What are the real components of this show?

The first thing that must be established is that the protests are not protests. They have gone well beyond the point of expressing an opposing opinion. They are not riots since these are not rowdy disturbances gone awry. These demonstrators have deliberately planned events subverting order night after night. There is nothing spontaneous about them.

Thus, the violence is not just violence. It must be called sedition because it is an “incitement of resistance to or insurrection against lawful authority.” These acts of sedition are meant to injure police, damage state property, and disturb the peace.

The individuals involved in these acts of seditions are not protesters, rioters or demonstrators. They are insurrectionists. They do not desire to fix the system or improve the present society. They want the overthrow of a legitimate order and the installation of a contrary and illegitimate state of things.

The Agents of Order

The city and state police and Homeland Security officers are the second players on the set in Portland. They endure the abuse from the insurrectionists. They are not the instruments of violence, but agents of order and the rule of law. Whatever their defects may be, they are the thin blue line standing between order and chaos. They can be called heroes because they go beyond the call of duty in dealing with the revolutionaries in their acts of sedition.

Their service to the community usually does not include lasers flashed to harm their eyes. Commercial grade fireworks seek to injure their bodies. They should not be exposed to the obscenities and insults that call harm upon them. They face acts of arson that attempt to burn down federal and other buildings with them inside. These heroes bear this abuse peacefully and calmly night after night.

This is the cast of characters found upon the streets of Portland. It reflects a dangerous and explosive situation. However, another situation is far worse.

A Strange Twist of the Plot

The scene in the drama changes from the violent streets of Portland at night and shifts to the government offices of city and state officials viewing the tragic scenes during the day. These characters should favor the heroes of order and oppose the seditious insurrectionists who hate lawful authority and its symbols.

However, this is far from the case.

In a strange twist of the plot, the local government officials do everything possible to facilitate the nightly disorders. They complain about the actions of federal officials who take measures against the revolutionaries.

It is as if the characters in this government set have lost their minds and joined the other side. The plot loses coherence, and everything goes haywire.

There is no other way to explain the inexplicable actions of liberal officials in the face of violence and chaos. Most of these figures are supporting the insurrectionists.

Gov. Kate Brown of Oregon, for example, has denounced not the revolutionaries, but the federal agents. She accuses them of escalating the violence, even though the violence continued after the federal agents left the scene. Her Department of Justice is taking legal action against the federal government for intervening in the nightly battles to protect federal buildings.

Another scandalous example is that of Multnomah County district attorney Mike Schmidt. He announced that his office would not prosecute most of the over 500 insurrectionists who have been arrested by police throughout the acts of sedition. Those charged will be limited to acts of deliberate property damage, theft, or threat of violence. However, only 50 have been charged for now. The release of so many lawbreakers assures the insurrectionists on the street that their criminally seditious acts will have no legal consequences. They are free to continue their macabre march to chaos, free of the restrictions of the law.

Indeed, insurrectionists continue to throw mortars, rocks, bottles, and cans of paint at the police. They chant, “Kill a cop, save a life!” They set off fireworks aimed at police who are not expected to react lest they be accused of “brutality.”

These acts of surrender to insurrectionists prompted the Oregon State Police to abandon Portland after protecting the federal courthouse, arresting offenders, and sustaining injuries. Capt. Timothy Fox said the troopers are moving “back to counties where prosecution of criminal conduct is still a priority.”

The strain of the acts of sedition is preventing Portland city police from responding to increased criminal activities in other parts of the city. Many calling 911 are put on hold. The police department reports increased calls requesting help against “theft, vandalism, suspicious activity, hazards, hit and run, burglary, violation of restraining order, alarms, stolen cars, harassment and many others.”

The whole community suffers from the dereliction of duty by a few local government officials. A leftist agenda holds the city hostage.

The drama is not yet over since the final act has yet to be written. A cast of characters has yet to appear on stage.

The final scene takes place on Portland’s empty streets during the day that are surreal reflections of the violence of the night. Everywhere this is evidence of the nightly conflicts in the form of trash or broken glass. The buildings bear the battle scars of flashbangs and mortar-style fireworks. The federal court and other buildings are boarded up and full of graffiti.

The characters are Portland citizens who have allowed their city to be used as a stage for this macabre drama. They are largely silent as their downtown is destroyed. The nation asks if they will speak up and protest against these barbarous acts that threaten their city and personal security. Not even the destruction of their community seems enough to overcome the liberal haze that lingers over the scene and clouds their vision.

Betrayal of the Public Trust

At this point, it remains to name the culprits bearing the most responsibility: the criminally negligent public officials. Their coddling of the insurrectionists represents an immense betrayal of the public trust. The city’s safety and the common good are put at risk because these officials put their leftist pet causes above the fundamental, natural and constitutional rights of their citizens.

These officials can no longer be called public servants. They are traitors who betray the trust of the public they are sworn to serve. And, instead, they favor the avowed enemies of order, the rule of law, and the common good.

Saint Thomas Aquinas teaches that justice in law comes from its service to the common good (Summa, Ia IIae, q 90. 2.2). Indeed, law that does not serve the common good is not law at all. Likewise, public authority is instituted for the common good of all citizens. When public officials fail to uphold order and the rule of law, they subvert the common good. They should be denounced, protested, publicly shamed, and legally removed.

It remains to be seen if Portland’s and Oregon’s citizens will have the courage to take this necessary step.

However, the concern for order extends farther than Portlanders and Oregonians. All American citizens who grieve for the nation must be alarmed by this tragic drama that can spread like cancer over the entire country.