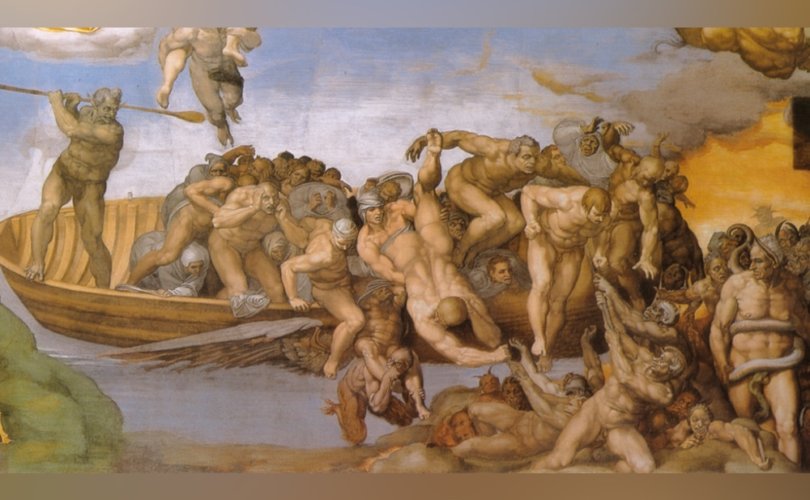 Portion of Michelangelo's The Last Judgment. Charon and his boat of damned souls.

July 31, 2018 (Church of St. Michael) – Samuel Taylor Coleridge indulged his romantic naiveté in suggesting that culture should be governed by an educated elite, which he called a “clerisy.” The word had the same root as “cleric,” since the clergy had a pre-eminent role in erudition. Coleridge meant it to include all who were versed in higher thought. He was ignorant of the dictum that an intellectual is often someone educated beyond his intelligence. Knowledge is not wisdom. Common sense thrives best among those whom the clerisy caste tend to patronize as common.

Along with professors and bureaucrats, the clergy have to be careful, since clerisy is a relentless illusion. The clergy are at their best when they proclaim the solid Gospel, and they can be at their weakest when they assume a prerogative to comment on problems outside their competence.

The National Conference of Catholic Bishops published in 1983 a pastoral letter on disarmament, “The Challenge of Peace,” which, if taken seriously, might have prevented the fall of the Berlin Wall six years later. Their pastoral letter on economics in 1986, “Economic Justice for All,” prescribed a big-government solution that could have thwarted the economic boom that ensued despite them. The clerisy rejected a cogent critique of “Economic Justice” chaired by the former Secretary of the Treasury, William Simon, and supported by Secretary of State Alexander Haig and J. Peter Grace, among others. Opponents of the peace pastoral, Archbishop Philip Hannan and then-Bishop John J. O’Connor, were ignored even though Hannan was the only bishop who had served in World War II, and the future cardinal was auxiliary bishop for the Armed Forces.

Recently, a bishop suggested that anyone who supported laws on illegal immigration might be subject to canonical penalties, a stricture he did not invoke against Catholic congressmen in his state who support abortion. The bishops have also disagreed with the Supreme Court’s defense of the right to work for federal employees. Clerisy often prefers gratuitous politics to doctrinal orthodoxy.

Then there is the curious inconsistency of a cardinal who has said that priests “have no credibility” when it comes to marriage instruction because they have not been married themselves. Having prepared over eight hundred people for marriage, I might venture to enlist most of them in witness against his demurral from competence, and would also ask, if that cardinal is correct, why does he not see any inconsistency in declaring this as prefect of the Dicastery for the Laity, Family, and Life. Pope Francis has said that “no one better than [a priest] knows” the challenges that married couples face. Clerisy may be well-intentioned, but Saint Bernard of Clairvaux said that the road to Hell is full of good intentions.

Clerisy does have its flaws, in witness to which one might conjure the ghost of Samuel Taylor Coleridge who, despite his erudition, died from recourse to opium.