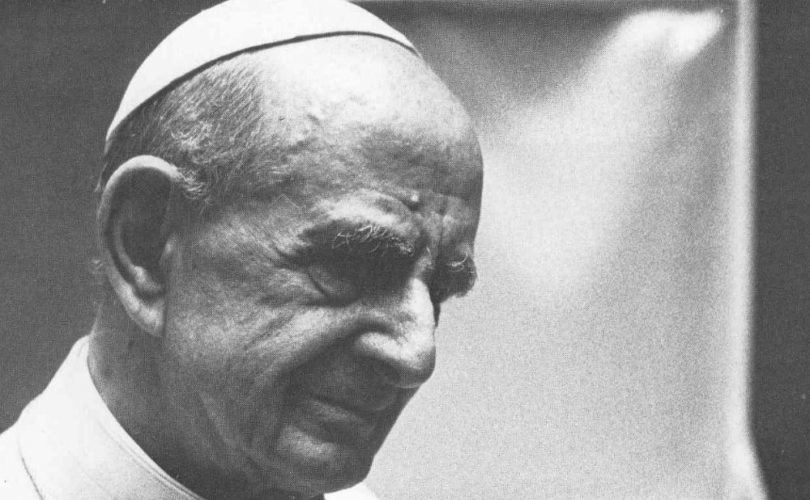 ROME, July 19, 2018 (LifeSiteNews) — At the beginning of 2017, Pope Francis set up a “study commission” to prepare for the 50th anniversary of Humanae Vitae (July 25, 2018). The existence of this “secret” commission was brought to light some months after by two Catholic publications, Stilum Curae and Corrispondenza Romana.

The commission, coordinated by Monsigno Gilfredo Marengo, was tasked with finding in the Vatican archives the documentation relating to the preparatory work on Humanae Vitae which took place during and after Vatican Council II.

The first fruit of this work is the volume by Monsignor Gilfredo Marengo, The birth of an Encyclical. Humanae Vitae in the light of the Vatican Archives [La nascita di un’Enciclica. Humanae Vitae alla luce degli Archivi Vaticani], published by the Libreria Editice Vaticana. Other publications perhaps will follow and other documents presumably will be submitted, privately, to Pope Francis.

From a historiographical point of view, Monsignor Marengo’s book is disappointing. On the genesis and consequences of the encyclical Humanae Vitae, within the context of the contraceptive revolution, the best book, to my view, is Renzo Puccetti’s, The Poisons of Contraception [I veleni della contraccezione] (Dominican Edizioni Studio, Bologna 2013).

Monsignor Marengo’s study does, however, contain some new elements. The most relevant is the publication of the complete text of an encyclical De nascendi prolis (pp. 215-238), which, after five years of agonizing work, Paul VI approved on May 9, 1968, fixing the date of its promulgation for the Solemnity of the Ascension (May 23).

The encyclical that Monsignor Marego defines as “a rigorous pronouncement of moral doctrine” (p.194), was already printed in Latin when there was an unexpected turn of events. The two French translators, Monsignor Jacques Martin and Monsignor Paul Poupard, expressed strong reservations about the document’s overly “traditional” approach. Paul VI, disturbed by the criticism, worked personally on numerous modifications of the text, changing above all its pastoral tone, which became more “open” to the cultural and social demands of the modern world.

Two months later, De nascendi prolis was transformed into Humanae Vitae. The Pope’s concern was to ensure that this new encyclical “would be accepted in the least problematic way possible” (p. 121), thanks not only to the reformulation of its language, but also to the devaluation of its dogmatic character (p. 103).

Monsignor Marengo recalls that Paul VI did not accept the invitation of the Archbishop of Krakow, Karol Wojtyla, to issue a “a pastoral instruction reaffirming, in no uncertain terms, the authority of the doctrine of Humanae Vitae, in face of the widespread protest movement against it” (p. 128).

The objective, or at least the result of Monsignor Marengo’s book, seems to be that of relativizing Paul VI’s encyclical, which is presented as a phase in a complex historical journey that has not been concluded by the publication of Humanae Vitae, or with the discussions that followed it. One cannot “claim to have said the ‘last’ word and to close, if it were ever needed, a decades-long debate” (p.11).

On the basis of Monsignor Marengo’s historical reconstruction, the new theologians who refer to Amoris laetitia will say the teaching of Humanae Vitae has not changed, but must be understood as a whole, without limiting oneself to the condemnation of contraception, which is only one aspect of it. Pastoral care — it will be added — is the criterion for interpreting a document that reminds us about the Church’s doctrine on the regulation of births, but also about the need to apply it according to wise pastoral discernment. In the final analysis, it is a question of reading Humanae Vitae in the light of Amoris laetitia.

Humanae Vitae was an encyclical that caused great anguish (as Paul VI himself called it) and was certainly courageous. Indeed, the essence of the ’68 Revolution was captured in the saying “it is forbidden to forbid,” a slogan that expressed the rejection of every authority and every law, in the name of the liberation of instincts and desires.

Humanae Vitae, in reiterating its condemnation of abortion and contraception, recalled that not everything is permitted, that there is a natural law and a supreme authority — the Church — which has the right and the duty to protect it. Humanae Vitae, however, was not a “prophetic” encyclical. It would have been so, had it dared to oppose the false prophets of Neo-Malthusianism with the divine words “Be fruitful and multiply.” (Genesis 1:28; 9:27).

Yet it did not do so, because Paul VI, in his fear of coming into conflict with the world, accepted the myth of the demographic explosion, launched in 1968 by Paul Ehrlich’s book, The population bomb. In 2017, Ehrlich himself was invited by Msgr. Marcelo Sánchez Sorondo to reiterate his theories on overpopulation at the conference organized by the Pontifical Academy of Sciences. The conference was titled: Biological Extinction. How to save the natural world on which we depend. (February 27 – March 1, 2017).

In his book, the author describes the catastrophic scenarios that the inhabitants of Earth would have to face if measures were not taken to contain population growth. What the encyclical rightly condemns is artificial contraception, but without rejecting the new “dogma” of the necessary reduction in births. Humanae Vitae replaced Divine Providence, which up to that point had regulated births in Christian families, with the human calculation of “responsible parenthood.”

The Magisterium of the Church dogmatically affirms, however, that contraception is to be condemned not only because it is an unnatural method in itself, but also because it is directly opposed to the primary end of marriage, which is procreation. If one does not affirm that the procreative end prevails over the unitive one, one can maintain the thesis that contraception can be lawful when it undermines the “intima communitas” of the spouses.

John Paul II vigorously reaffirmed the teaching of Humanae Vitae, but the concept of conjugal love that spread under his pontificate is at the origin of many misunderstandings. In this regard, I refer to the precise observations of Don Pietro Leone, the pseudonym of an excellent contemporary theologian, in his book The Family Under Attack: A Philosophical and Theological Defense of Human Society (Loreto Publications, 2015).

Over the last 50 years, due also to a misguided conception of the ends of marriage, papal teachings have been disregarded, and among Catholics the practice of contraception and abortion, extra-matrimonial cohabitations, and homosexuality have become widespread. The post-synodal Exhortation Amoris laetitia represents the result of an itinerary that has been a long time coming.

Repeating almost verbatim the words spoken on October 29, 1964 by Cardinal Leo-Joseph Suenens in the Council Hall: “It may be that we have emphasized the word of Scripture, ‘Be fruitful and multiply,’ to the point of leaving in the shadows the other divine word, ‘The two will become one flesh’,” Pope Francis said in Amoris laetitia. “We often present marriage in such a way that its unitive meaning, its call to grow in love and its ideal of mutual assistance are overshadowed by an almost exclusive insistence on the duty of procreation” (n. 36).

Reversing these words, we might say that in recent decades we have almost exclusively emphasized the biblical words, “The two will become one flesh,” to the point of leaving in the shadows the other divine words: “Be fruitful and multiply.” It is also from this word, so rich in significance, that we must again set out towards not only a demographic rebirth, but also a spiritual and moral regeneration of Europe and the Christian West.

This article originally appeared in Italian at Corrispondenza Romana. This translation for LifeSite was done by Diane Montagna.