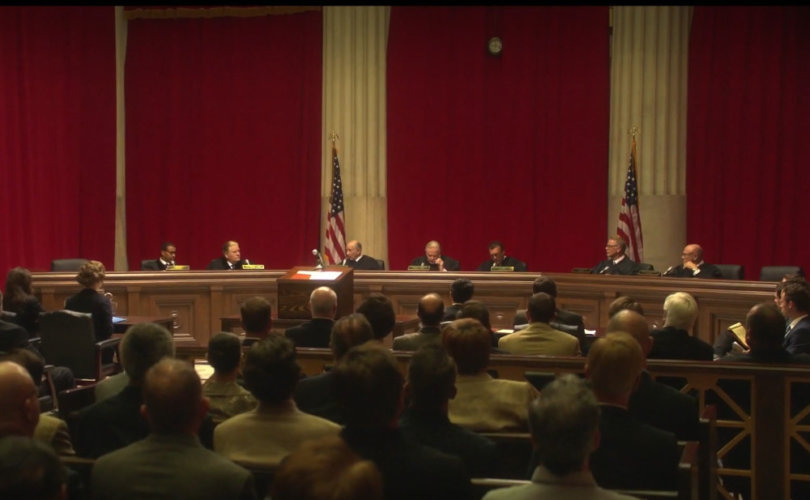 The film gives an overview of abortion politics in the 1960s and 1970s and provides detailed information about the both the background and aftermath of the Roe v. Wade decision. The Roe v. Wade movie will be available through various online streaming services in early April.

Indeed, Roe v. Wade is arguably the most well known Supreme Court decision of the 20th century. Since 1973, it has been discussed during presidential debates and legislative hearings. Questions about Roe v. Wade are invariably asked during the confirmation hearings of Supreme Court nominees.

Over the years, Roe v. Wade has certainly received well-deserved scrutiny and criticism. Yale Law Professor John Hart Ely was outspoken critic of Roe v. Wade after the decision was handed down in 1973. In more recent years, Clarke Forsythe’s detailed book, Abuse of Discretion, makes a strong argument that even under liberal standards of jurisprudence, Roe v. Wade is a deeply flawed decision.

After the first hearing, it appeared that there were enough votes to strike down the Texas law limiting abortion. However, Justice Burger was able to persuade his fellow judges to re-hear the case. Some thought that Nixon appointees William Rehnquist and Lewis Powell might create a majority to uphold the Texas law. However, after the 1972 rehearing, seven Supreme Court judges voted to strike down the Texas law and legalize abortion on demand throughout all nine months of pregnancy.

The movie also depicts the pressures the judges faced from family members. Justice Potter Stewart’s wife volunteered for Planned Parenthood and Justice Blackmun’s daughter, Sally, went on to serve on the board of Planned Parenthood of Orlando, Florida.

The movie shows the manipulative tactics used by supporters of legal abortion. Norma McCorvey, the Jane Roe in the Roe v. Wade decision, had absolutely no interest in being part of a nationwide political effort to legalize abortion. As an unwed, pregnant 21-year-old in 1969, McCorvey simply wanted to obtain an abortion.

One of her lawyers, Sarah Weddington, actually obtained an abortion in Mexico when she was a law student at the University of Texas Law School. However, Weddington did not provide information about obtaining an abortion to McCorvey. This is because Weddington needed McCorvey to remain pregnant in order to mount an effective legal challenge to the Texas abortion laws.

Supporters of legal abortion were manipulative in other ways. Larry Lader and Bernard Nathanson realized that their efforts to legalize abortion needed assistance from feminist groups. They approached Betty Friedan, who was President of the National Organization of Women. Friedan had misgivings because she thought feminist groups should prioritize other issues. However, Friedan agrees to assist them once Lader and Nathanson indicated that they would seek assistance from Gloria Steinem and Bella Abzug.

Additionally, Lader and Nathanson simply fabricated statistics about public opinion toward abortion and the number of illegal abortions that took place. Sympathetic media outlets were all too happy to publish these statistics without requiring any documentation.

The movie also nicely highlights the important contributions of a number of early pro-life activists. These include Mildred Fay Jefferson, the first African American female to graduate from Harvard Medical School. Jefferson went on to become president of the National Right to Life Committee (NRLC) in the 1970s. Ellen McCormack, a New York housewife, sought the Democratic Party’s 1976 presidential nomination as a pro-life candidate. In the movie, she is portrayed by Mindy Robinson. Finally, Father James T. McHugh, who was the first director of pro-life activities for the U.S. Conference of Catholic Bishops (USCCB), is also portrayed in the movie.

However, it is the journey of Bernard Nathanson that is the most poignant. As many pro-lifers know, he was a co-founder of NARAL in the 1960s and a leader in the effort to legalize abortion. He was the director of an abortion clinic in New York City and oversaw tens of thousands of abortions. Early in the movie, when Nathanson is working on behalf of legal abortion, it is clear that he has misgivings about making abortion available on demand. However, it is not until the late 1970s, when he sees an ultrasound image of an unborn child, that Nathanson becomes pro-life.

The end of the film provides some important details about events that took place after the Roe v. Wade decision. Norma McCorvey becomes pro-life. She never obtained an abortion and candidly admits that her lawyers Sarah Weddington and Linda Coffee lied to her. The film also shows Nathanson being received into the Catholic Church.

The movie shows a clip of The Silent Scream, the famous 1985 documentary which Nathanson helped direct, depicting an ultrasound of an unborn child being aborted. He states that what you see is “The Silent Scream of a baby being threatened with extinction.”

It should give pro-lifers hope that Roe v. Wade will be someday be reversed. Furthermore, even though pro-lifers have not yet succeeded in reversing Roe v. Wade, this movie should convince viewers that pro-life efforts to overturn this tragic decision continue to be a worthy, admirable, and important goal.

Michael J. New is a Research Associate at the Busch School of Business at The Catholic University of America. He is also an Associate Scholar at the Charlotte Lozier Institute. Follow him on Twitter @Michael_J_New.