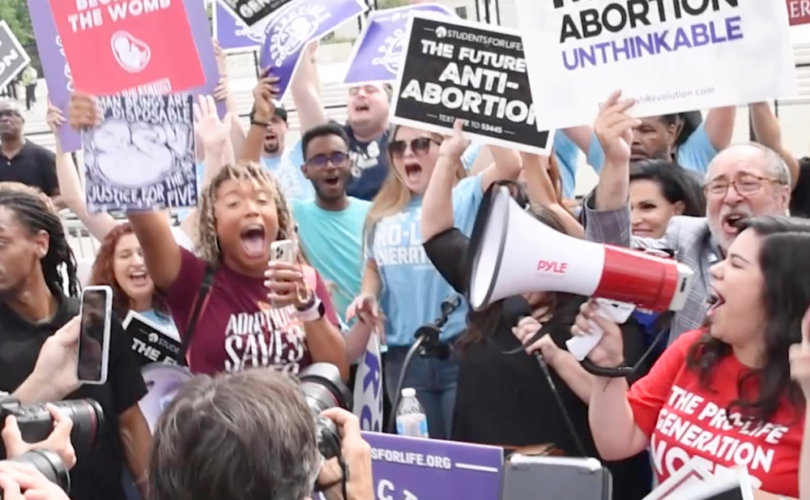 (American Thinker) – The words of Justice Samuel Alito in the Dobbs decision, in which the Supreme Court expressly overturned Roe v. Wade and Planned Parenthood v. Casey, could not be clearer. “Roe was egregiously wrong from the start,” he writes. “Its reasoning was exceptionally weak, and the decision had damaging consequences.”

Justice Alito quoted Justice Byron White’s characterization of Roe in his 1973 dissenting opinion: an “exercise of raw judicial power.” The Court has now pulled back from that unconstitutional exercise of “raw judicial power” and redeemed itself, as it did in 1954, when the Brown decision overruled Plessy v. Ferguson.

Justice Alito explained accurately that the “Constitution makes no reference to abortion, and no such right is implicitly protected by any constitutional provision,” including the 14th Amendment. He correctly notes that until the late 20th century, the right to an abortion “was entirely unknown in American law,” and at the time the 14th Amendment was ratified, “three quarters of the States made abortion a crime at all stages of pregnancy.”

Stare decisis, which favors affirming past decisions of the Court, Alito writes, “does not compel unending adherence to Roe‘s abuse of judicial authority.”

Justice Alito uses a historical tour de force to show that abortion had been considered a crime in common law dating back at least to the 13th century, and that there was no common law case or authority “that remotely suggests a positive right to procure an abortion at any stage of pregnancy.” In America’s colonial period, Alito notes, abortion was a crime.

During the 19th century, he continues, “the vast majority of the States enacted statutes criminalizing abortion at all stages of pregnancy.” And “many judicial decisions from the late 19th and early 20th centuries” expressed the opinion that “abortion kills a human being.”

By 1960, “statutes in all but four States and the District of Columbia prohibited abortion … unless done to save or preserve the life of the mother.” This history lesson put the lie to the Roe majority’s assertion that abortion was “deeply rooted in the history or tradition of our people.”

Instead, Alito concludes, our history evidences “an unbroken tradition of prohibiting abortion on pain of criminal punishment … from the earliest days of the common law until 1973.”

In perhaps the most compelling paragraph of the opinion, Justice Alito explains how Roe and Casey unconstitutionally substituted the ruling of unelected judges for the democratic processes on matters of policy that belong to the people acting through their elected legislatures:

Roe was on a collision course with the Constitution from the day it was decided, Casey perpetuated its errors, and those errors do not concern some arcane corner of the law of little importance to the American people. Rather, wielding nothing but “raw judicial power,” Roe, 410 U. S., at 222 (White, J., dissenting), the Court usurped the power to address a question of profound moral and social importance that the Constitution unequivocally leaves for the people.

Casey described itself as calling both sides of the national controversy to resolve their debate, but in doing so, Casey necessarily declared a winning side. Those on the losing side — those who sought to advance the State’s interest in fetal life — could no longer seek to persuade their elected representatives to adopt policies consistent with their views. The Court short-circuited the democratic process by closing it to the large number of Americans who dissented in any respect from Roe. “Roe fanned into life an issue that has inflamed our national politics in general, and has obscured with its smoke the selection of Justices to this Court in particular, ever since.” Casey, 505 U. S., at 995–996 (opinion of Scalia, J.). Together, Roe and Casey represent an error that cannot be allowed to stand.

— Article continues below Petition —
Tell the Secretary of Defense: "Pride Month" is making our country weaker
Show Petition Text
10028 have signed the petition.
Let's get to 12500!
Thank you for signing this petition!
Add your signature:
Show Petition Text

Justice Alito again refers to Justice White’s scathing conclusion that in Roe the Court engaged in “unrestrained imposition of its own extraconstitutional value preferences.”

Those value preferences will now be tested at the ballot box and in the legislative chambers and executive offices of our fifty states. The Court’s opinion in Dobbs does not outlaw abortion. Instead, in Justice Alito’s words, it returns “that authority to the people and their elected representatives.”

The Court’s opinion in Dobbs confirms what Pennsylvania Democratic governor Robert Casey said nearly thirty years ago: the “right” to abortion was “something created by the Supreme Court in 1973. It’s not in our Constitution. It’s not in any of our traditions or history.”

The harm Roe and Casey did to our democratic processes, however, pales in comparison to the harm those decisions inflicted on more than 60 million unborn babies who have been “legally” aborted since Roe was decided, in what Father John Powell, S.J. called “the silent holocaust.”

And the Court’s decision in Dobbs should leave little doubt that Donald Trump’s most consequential action as president was the nomination of three Supreme Court justices who tipped the balance on the Court in favor of overruling Roe and Casey.