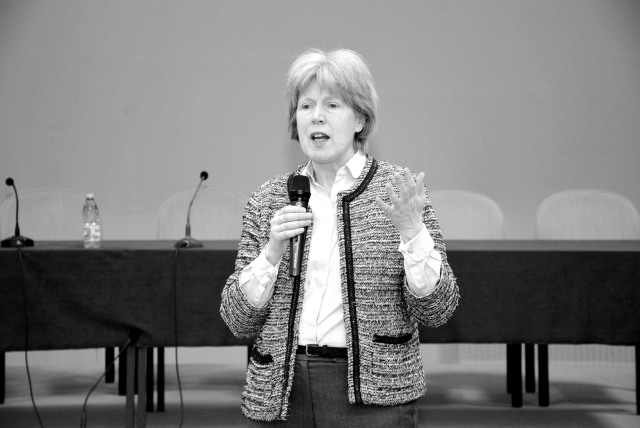 Antonia Tully, leader of the Safe at School initiative

November 25, 2015 (VoiceoftheFamily) — The battle to defend children from harmful forms of sex education was dealt a damaging blow by the 94% of cardinals and bishops attending the Ordinary Synod of the Family who voted in favour of paragraph 58 of the final report of the synod, which undermines the rights of parents as primary educators of their children.

Antonia Tully, leader of the Safe at School initiative, a project of the Society for the Protection of Unborn Children, was invited to Romania this month by the Metropolitan Orthodox Church of Moldova and Bukovina and pro-life groups to speak about the impact on children of graphic sex education. Here is her encouraging report about parents’ resistance in Romania which she concludes with the words: “If mandatory sex education is stopped at the Romanian border it will deal a much needed blow to the global campaign to sexualise and defile the innocent hearts and minds of the world’s children.”

The global drive to make school sex education mandatory for the world’s children is finding strong and organised resistance in Romania, where the issue currently hangs in the balance. The country’s Minister for Health favours pro-abortion/LGBT style sex education while the Minister for Education would like to see Romanian children taught the family values promoted by the pro-life lobby.

The good news is that introducing graphic sex education into Romanian schools will not be a pushover. Having recently returned from a week-long visit to Romania at the invitation of the Metropolitan See of Moldova and Bucovina, I saw parents and the Orthodox church standing shoulder to shoulder determined to protect their children from damaging sex education. The bad news is that the sex education lobby has been given access to the political and civic infrastructure to promote its position and materials.

In 2013, over 2,000 public libraries in Romania became the channel for distributing a graphic sex education programme; “Sex v the Stork”. This online resource was written by a Romanian, Adriana Radu, following a year she spent in Germany working with a pro-abortion organisation. Roundly condemned by pro-family groups, “Sex v the Stork” was launched in the Romanian parliament on national “Day of the Library”, and made available to any child visiting a library via the internet, avoiding control by parents or schools.

Speaking to packed meetings in five different towns and cities mainly in the north east of Romania, I invited people to look across Europe to Britain. Teaching children as young as five and six years old about their sexual organs, followed by detailed animated presentations of sexual intercourse are fairly standard elements of British classroom sex education. In Britain we are being told that children have a “right” to this education, indeed they “need” it in order to avoid pregnancy and to stay safe from sexual abuse. Nothing was lost in translation when I informed parents, teachers, doctors and priests that there is no evidence that teaching young children about sex protects them from premature pregnancy or sexual abuse. My take home message is: Parents you are the first and best educators of your children. You are the best people to protect your children.

In October 2015, 60 pro-abortion organisations petitioned the ministries of health and education to impose sex education on the country’s schools. This was accompanied by typically vulgar demonstrations outside the respective ministries, with young people brandishing condoms, underwear and bearing placards with slogans such as “My vagina- my choice”.

82 pro-life groups responded with a joint statement firmly rebuffing the claims of their opponents. Drawing on their recent past, they pointed out that the first political system to significantly separate children from their parents was Communism. They said: “It is not difficult to identify in the proposed approach for sex education an essentially Communist principle: children do not belong to parents they belong to the state”. This sinister aspect of secular, state-sponsored sex education is perhaps not so keenly felt in many countries. But it is in Romania, where Christian families suffered so greatly under Communist rule.

Based in the lovely university city of Iasi (pronounced ‘yash’), I covered several hundred miles by car travelling around this beautiful country. But it is a country haunted by people who are not there. For every Romanian alive today (approximately 18 million live in Romania, with a further 2 million living abroad), there is one who has been lost to abortion. 20 million unborn babies have been killed by abortion in Romania from 1970 to the present day.

However, I am very hopeful for Romania. During my recent visit I heard a number of priests publicly pledge the support of the church to defeat sex education in schools. The Archbishop of the Diocese of Buzau and Vrancea spoke at the meeting I addressed in the city of Buzau, again positioning the church with ordinary parents in their initiatives to protect their children.

In 2011 the Orthodox archbishopric of Iasi, established the first dedicated, diocesan pro-life department in Romania. The department offers care and support for women in crisis pregnancies, it runs a social project for large families and has produced an accredited pro-life, pro-family teaching resource for schools in Iasi. Archbishop Teofan is clearly loved by his flock, not least for his outstanding pro-life witness.

However grateful my Romanian hosts were in each place I spoke, I am more grateful to them for their commitment to life and the family. Many, many Romanian families are resisting the sex education invasion from the west which would indoctrinate and corrupt their children. If mandatory sex education is stopped at the Romanian border it will deal a much needed blow to the global campaign to sexualise and defile the innocent hearts and minds of the world’s children.