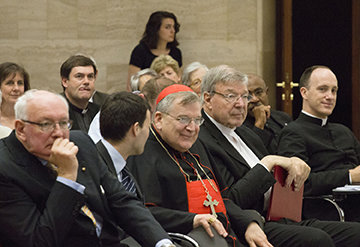 May 22, 2015 (LifeSiteNews.com) – Last year’s Extraordinary Synod on the Family and Pope Francis’s numerous controversial statements have created moral issue earthquakes – not only in the Catholic Church – but also in the entire world. That is why LifeSite, together with a number of other international pro-life, pro-family groups, organized the Rome Life Forum of a few weeks ago with major emphasis on the Synod.

If you have been reading the articles and viewing the videos that we have published to date, you will appreciate the significance of the Rome Life Forum. It was an historical event we are confident will have much positive influence on upcoming developments. There is still more to come as we find time to publish the remaining videos and gather the texts of all 11 presentations from the two days.

In addition to Cardinals Pell and Burke, who were present for the final afternoon session, almost 200 of the top pro-life, pro-family, mostly Catholic (given the subject of this Forum) leaders in the world participated in the dramatic think tank event. This was more than double the participants from last year’s pioneer Forum organized by LifeSite at the time of the canonizations of Saints John Paul II and John XXIII. The public was invited to join the 2015 final afternoon session and that swelled the audience.

This year, there was unanimous agreement that the Forum had to address the deeply concerning implications of last year’s and the upcoming Synods on the Family and the papacy of Francis as related to the life and family issues.

This year the Forum was run by Voice of the Family, a coalition of dozens of pro-life and pro-family groups, included, SPUC (Britain’s Society for the Protection of Human Life), Human Life International, Family Life International of New Zealand, LifeSite (one of the two original co-founders) and many more.

I can’t emphasize enough the significance and exceptionally high quality and controlled passion of the presentations, discussions and networking that took place during the Forum. This was no ordinary pro-life conference.

Readers are strongly encouraged to take the time to gradually go through all the published materials. Much was stated and revealed that many have been thinking, but have not known how to relate. The speakers dealt with topics that someone had to finally confront and explain at this time of great confusion, if not fear for the immediate future.

Although every presentation had a powerful impact, the ones that caused the greatest response were those of John Smeaton, Matthew McCusker, Colleen Bayer, Maria Madise and above all those by Fr. Linus Clovis and our own John-Henry Westen who both received rousing applause. The videos are not yet posted of the Smeaton, McCusker and Bayer talks.

Before, in between, and after the sessions many participants spent a lot of time further discussing what we must do in response to the enormous challenges to the life and family causes as a result of the synod and many problematic statements of Francis.  That is, Francis’ statements, at least as interpreted by the world’s media, the most dissenting Catholic leaders and numerous very influential secular persons are a serious challenge for us to counter in the public mind.

There were constant late nights and early mornings as we continued to meet and squeeze as much activity as possible within the limited time available with these great leaders in the Eternal City.

While at the Vatican press office to upload video and photo files I was unexpectedly present for a Caritas press conference that will require a report on yet another disturbing Vatican development. Just to give you a hint, especially featured and praised during the press conference was Liberation Theology founder Gustavo Gutiérrez. Caritas Internationalis is the umbrella group for all the national bishops’ conferences aid agencies.

We have, for instance been heavily reporting on the serious problems with Canada’s Development and Peace and the ongoing scandals of the American Catholic Relief Services.

The heavily Marxist oriented work of Fr. Guttierez had been severely criticized by Pope John Paul II and this assessment was also held by Pope Benedict. Now, I gathered from what little I understood at the Italian and Spanish language press conference, Fr. Guttierez has been elevated to a high status under Francis and will play a major consulting role in the direction of Catholic international relief agencies and in the formation of the Church’s positions on the environment.  Oh my! Will all that was achieved under Benedict now be undone? It does appear so.

The day after the Forum all the leaders took part in the annual Rome March for Life. Organizer, Virginia Code Nunziante gathered many of us on the stage at the end of the march and introduced us, one by one to her Italian compatriots.

All in all, this was an incredibly fruitful, emotionally moving project that will be certain to benefit the pro-life, pro-life mission around the world. Follow up must now take place. You, our readers are needed to participate in that crucially needed action.  You must read and watch as much as possible the Forum items that we have published and will continue to publish over the next week.

Those are your tools and direction for action. Please, we are in a time in history where there are potential, historically very dangerous consequences for not acting. All that we have given our whole heart and soul to for the past several decades could experience dramatic reversals. The stakes are that high.

One of the most important actions for now is to simply promote to everyone you know the link to the Life Forum 2015 page of articles and videos so that others will become armed with the truth and motivated to play their role.