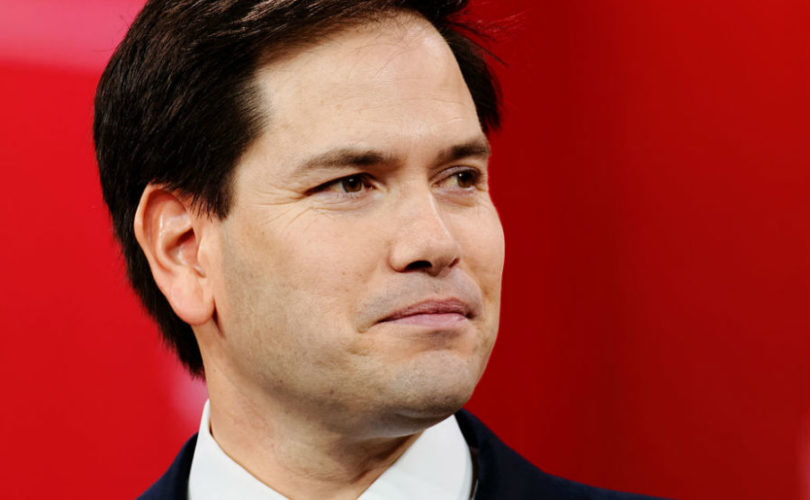 May 27, 2015 (LifeSiteNews.com) — Sen. Rubio told Rev. Pat Robertson that anyone who supports traditional marriage is being labeled “a homophobe and a hater.” He said “the next step is to argue that the teachings of mainstream Christianity, the Catechism of the Catholic Church, is hate speech….”

Rubio does not exaggerate. As if to prove him right, he was immediately branded as “anti-gay” by People for the American Way. Mediaite also sounded the alarm.

Gay organizations and publications that routinely brand traditional marriage advocates as bigots include the Human Rights Campaign, GayStarNews, the Advocate, lgbtqnation, Towleroad, and GLAAD. Non-gay groups that do the same include Media Matters, Salon, Huffington Post, and Think Progress. The Southern Poverty Law Center is the most irresponsible: an entity that believes in marriage as a union between a man and a woman runs the risk of being called an “anti-gay hate group.”

The lunacy never ends. Last year, a traditional marriage conference at Stanford University was condemned as “anti-gay.” Moreover, just staging the event was enough to provoke warnings that it might occasion a “significant increase in suicide” among homosexuals. Two years ago, the CEO of Starbucks said that if anyone didn't like his company's pro-gay marriage policy, “you can sell your shares in Starbucks and buy shares in another company.” He said this while saying Starbucks wants to “embrace diversity of all kinds.” Save for diversity of thought.

Rubio is right to warn that we are getting to the point where the Catholic Catechism will be condemned by the high priests of tolerance for its alleged hate speech on sexuality. Our side needs to respond with vigor. The Gaystapo is on the move.