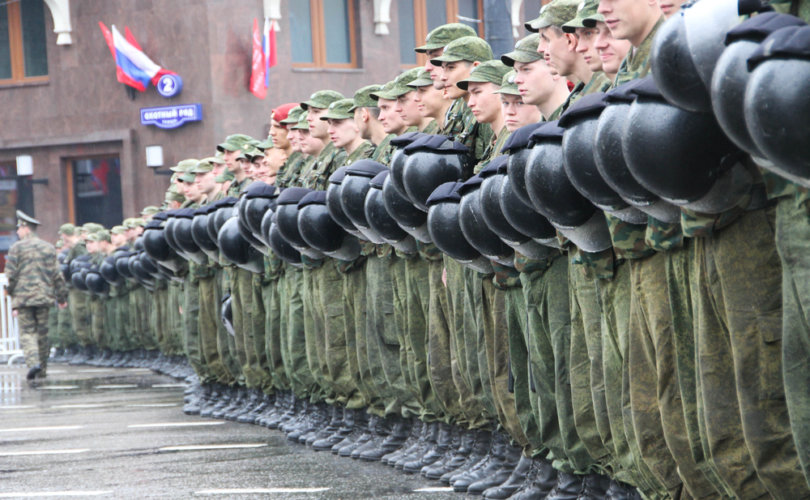 Russian troops line up for the march of communists at the Kremlin.Shutterstock.com

May 4, 2017 (LifeSiteNews) — As I’ve been researching Fatima for several speaking engagements this year, I was confronted over and over again by Our Lady’s insistence on Russia’s consecration. That after it was done, as well as the practice of the First Five Saturdays of reparation, Our Lady promised Russia would be converted and a period of peace would be given to the world. If not, the Queen of Heaven warned, Russia “will spread her errors throughout the world, causing wars and persecutions of the Church.” She added, “The good will be martyred, the Holy Father will have much to suffer, various nations will be annihilated.”

“In the end, my Immaculate Heart will triumph,” she said. “The Holy Father will consecrate Russia to me, and she shall be converted, and a period of peace will be granted to the world.”

Of course, St. Pope John Paul II entrusted the world to the Immaculate Heart in 1984, but we still await that period of peace. We have seen more war, massacres, martyrs, and abortions in the last half century than ever before. Ominously, we have not yet seen the annihilation of various nations. But what does all this have to do with Russia?

Russia, in the minds of most people, is the originator of communism – thought mainly to be an economic system competing with capitalism. However, when we really comprehend communism, the spread of Russia’s errors becomes recognizable.

“The Naked Communist” is the most concise and straightforward source outlining communist goals and ideology. It was written by W. Cleon Skousen, a former FBI agent who used many original sources, and the best intelligence of the FBI during its investigation of communist infiltration into the United States. The book is recorded in the Congressional Record and President Ronald Reagan commented on it saying: “No one is better qualified to discuss the threat to this nation from communism.”

A selection of the goals of communism listed by Skousen serve to illustrate its spread to all nations, especially the West:

• Eliminate all laws governing obscenity by calling them “censorship” and a violation of free speech and free press.

• Break down cultural standards of morality by promoting pornography and obscenity in books, magazines, motion pictures, radio, and TV.

• Infiltrate the churches and replace revealed religion with “social” religion.

• Discredit the Bible and emphasize the need for intellectual maturity which does not need a “religious crutch.”

• Eliminate prayer or any phase of religious expression in the schools on the ground that it violates the principle of “separation of church and state.”

Beyond communism, however, another of Russia’s errors has spread throughout the world – abortion. Abortion was first legalized in Russia in 1920. To this day, Russia has the highest abortion rate in the world per capita. With a population of 143 million, there are 1.2 million abortions per year.

There is no doubt Mary’s predictions and promises will come true. Our Lady of Fatima predicted the Second World War and even noted a warning sign that would precede it. She warned of the massive plague of impurity that has infested the planet. She gave the faithful tasks to fulfill in order to see the Triumph her Immaculate Heart and she will be faithful to those prophecies too.

So, as we honour our own mothers this month, let’s examine again the requests of Our Blessed Mother and put them into practice. She asked for prayer, particularly the Holy Rosary and the devotion of the Brown Scapular. She urged reparation for the sins and outrages perpetrated against God's Grace and blasphemies against the Holy Hearts of Jesus and Mary, especially with the practice of the First Five Saturdays. And finally, she asked for consecration to the Immaculate Heart of Mary, both on a personal basis and, publicly, that of Russia by the Pope and all the world's bishops.

Almost all of those matters are within our personal control. There is no better time than this year, especially during the season of the Resurrection, the season of Easter, to implement these practices in our lives. Let us take up the weapon of the rosary – our umbilical cord to Our Heavenly Mother. Let us make the First Five Saturdays devotion and teach them to our children. Let us consecrate ourselves to the Immaculate Heart as St. Louis de Montfort taught and St. John Paul called “indispensable to anyone who means to give himself without reserve to Christ and to the work of redemption.”