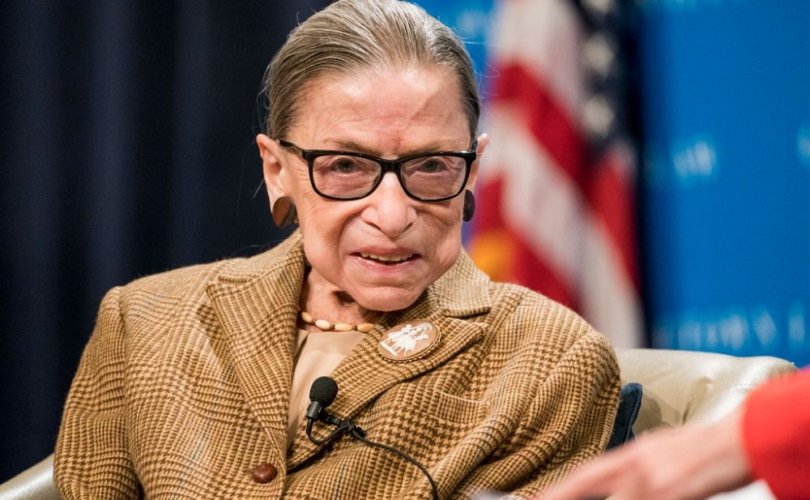 September 21, 2020 (CNS News) — Justice Ruth Bader Ginsburg, who defended what she argued was a constitutional “right” to partial-birth abortion, passed away on Friday night. She was 87 years old.

In the 2000 case of Stenberg vs. Carhart and the 2007 case of Gonzales vs. Carhart, Ginsburg made clear her view that the U.S. Constitution protected a “right” to abortion (as the court had ruled in the 1973 case of Roe vs. Wade and the 1992 case of Planned Parenthood vs. Casey) and that this right extended to the practice of partial-birth abortion.

In his dissenting opinion in Stenberg, Justice Thomas described the partial-birth abortion procedure which the court’s majority declared a constitutional right.

Although there are variations, it is generally performed as follows: After dilating the cervix, the physician will grab the fetus by its feet and pull the fetal body out of the uterus into the vaginal cavity. At this stage of development, the head is the largest part of the body. Assuming the physician has performed the dilation procedure correctly, the head will be held inside the uterus by the women’s cervix. While the fetus is stuck in this position, dangling partly out of the woman’s body, and just a few inches from a completed birth, the physician uses an instrument such as a pair of scissors to tear or perforate the skull. The physician will then either crush the skull or will use a vacuum to remove the brain and other intracranial contents from the fetal skull, collapse the fetus’ head, and pull the fetus from the uterus.

“A state regulation that ‘has the purpose or effect of placing a substantial obstacle in the path of a woman seeking an abortion of a nonviable fetus’ violates the Constitution,” Ginsburg wrote in her Stenberg opinion.

In this dissent, Ginsburg argued that it was “irrational” to ban partial-birth abortion.

“In sum,” wrote Ginsburg, “the notion that the Partial-Birth Abortion Ban Act furthers any legitimate governmental interest is, quite simply, irrational.”

She then argued that the court’s opinion upholding the partial-birth abortion ban was part of an “effort to chip away” at the “right” to abortion.

“The Court’s defense of the statute provides no saving explanation,” wrote Ginsburg. “In candor, the Act, and the Court’s defense of it, cannot be understood as anything other than an effort to chip away at a right declared again and again by this court — and with increasing comprehension of its centrality to women’s lives.”

Published with permission from CNS News.