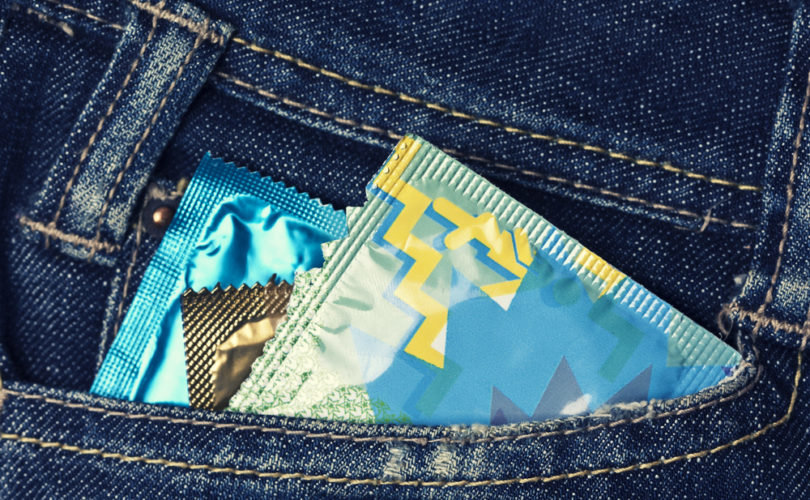 “Safe sex is the best sex!”

So said one of the Illinois Choice Action Team members offering free condoms to those walking past our abortion victim signs in downtown Chicago during our recent “Face the Truth” Tour.

It’s times like these that I’m reminded that “The Abortion Debate,” as it’s so often reduced to in everyday conversation, is about much more than whether or not unborn babies deserve the protection of law.  Walking it backward, we see that at its root, it’s about two very, very different attitudes toward human sexuality.

My boss, Pro-Life Action League executive director Eric Scheidler, made an interesting observation about the “Safe sex is the best sex!” comment.  “They’re actually right,” he said. “Except they don’t know what safe sex really is.”

Safe sex — really, truly safe sex — is sharing your body with your spouse when and only when you’re open to life. This mutual self-giving of husband and wife is nothing less than a physical renewal of a couple’s wedding vows to love each other freely, totally, faithfully, and fruitfully.

The answer is, of course: They can’t.

The truly “safe” and responsible thing to do is to recognize that there is an inseparable link between life, love, procreation, and children. Sure, we can say they have nothing to do with each other, and even live our lives as if they don’t, but we do so at our own peril. Remember: Nature bats last.

Contrast this with what in common parlance is referred to as “safe sex,” and behold the chasm-like difference. As the idea is commonly understood, as long as you’re using condoms (with or without another form of birth control) to prevent STDs and unplanned pregnancy, you are supposedly practicing “safe sex.” The only thing that matters is consent, and thus, any objective discussion of boundaries becomes laughable.

Not All Consent Is Equal

Witness the lemming-like obsession with the Fifty Shades of Grey franchise, defended against naysayers by fans who parrot that everything that happens is between “consenting adults.”

But as the Canadian Centre for Bio-Ethical Reform’s Jonathon van Maren trenchantly pointed out in a recent article, “Not all consent is equal”:

Anyone who works with victims of domestic and sexual assault will tell you that just because someone permits something to happen or doesn’t extricate themselves from a situation doesn’t mean it isn’t, in fact, abuse. Only when it comes to sex are people starting to make this argument, so that they can cling to their fetishes and justify their turn-ons. Those women who defend the book because they think it spiced up their sex life are being incredibly selfish and negligent, refusing to think about how this book could affect other women in different situations, as well as young and impressionable girls.

After all, if consent is the sole criterion of the good, then why shouldn’t that be true for children as well as adults?

Imagine someone saying, “Food that doesn’t taste like garbage is the best food!”

Saying, “Safe sex is the best sex!” is just as absurd.  It’s also pathetic in the truest sense of the word.

No one finishes a delicious meal and exclaims, “Wow!  That did not taste like garbage!”

It goes without saying that the “best” types of food don’t taste like, you know, garbage.  But noting this fact isn’t exactly a ringing endorsement of their quality.

In a similar way, when happily married couples who are open to life mutually give themselves to each other in the sexual act, they’re not even thinking about being “safe” because they don’t have to.  They’re so far beyond the point of being concerned about getting an STD because — well, you figure it out — that it’s not even on their radar screen.

They’re not content to settle for “safe sex.” They understand that the real thing is ever so much more, and they’ll accept nothing less.