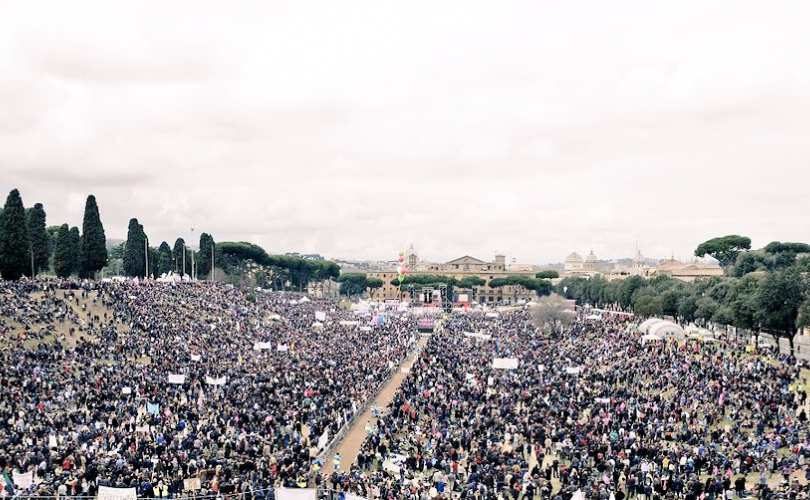 ROME, Italy March 5, 2016 (Rorate-caeli.blogspot.com) – The approval of homosexual pseudo-marriage in the Senate on February 25th 2016, with 173 in favor, 71 against and 76 abstentions is the last stage in the process of dissolution of Italian society which began with the introduction of divorce (1970), then the legalization of abortion (1978) and has as its next, imminent step, the legalization of euthanasia. With that in mind, we understand the exaltation of the secular press: “In the long and tortuous history of sexual liberation in Italy – writes Francesco Merlo in “La Repubblica”, February 26th – this law has the same epochal importance as the law on divorce and the law that regulates abortion”.

If Minster Alfano had threatened to resign he would have made the passing of this law impossible (or at least would have had it deferred). However, the Sicilian politician preferred to act like Andreotti, who wrote in his diary on January 27th 1977: “Session in Montecitorio for the vote on abortion. Passes with 310 in favor and 296 against. I considered the question of my countersignature on this law, (also Leone* has the same problem about his signature), yet if I should refuse, not only will we open a crisis just(after having …) begun to block the leaks, for besides being damaged by the law on abortion the DC [the Christian Democrats] would also lose the presidency and [this] would really be much more serious.” (Diaries 1976-1979. The Years of Solidarity, Rizzoli, Milan, 1981, pp. 73). The loss of the presidency of a government was considered much graver than the murder, permitted by law, of millions of innocent children.

What is foreseen in the legislation that carries the name of Monica Cirinnà? The law on civil unions, as the jurist Alberto Gambino explained in “Libero” on January 26th, is a para-matrimonial institution, in which the same rights and duties of matrimony are foreseen: moral and material aid, cohabitation, patrimonial rights, privileges regarding work, benefits, taxes, assignment of accommodation, even a common name and the sharing of material goods. The only matrimonial right not recognized is that of adoption, but Minister Cirinnà has announced that “a bill on adoptions for homosexual couples is almost ready. It will be incardinated in Parliament, where the numbers are certain, so that it arrives iron-clad in the Senate.” (“Il Fatto Quotidiano” February 26th). If this should not suffice, Europe will take care of the rest. In fact, the European Court for the Rights of Man, has established that once it is inserted into the ordering of an institution equal to matrimony, even if called “civil union” the introduction of adoptions becomes obligatory in order to avoid discriminations.

The Cirinnà law, now the Renzo-Alfano law, albeit the removal of homosexual adoptions, is in itself, iniquitous and unacceptable, not only as it introduces homosexual pseudo-matrimony, but also because it gives rights to homosexuals for being homosexual. According to Catholic doctrine, but even before that, the natural law, homosexuality, or sodomy, is a vice that subverts the principles of the moral order. Yet, Angelino Alfano declared on Agorà, TV Rai3: “I have never threatened the government on the matter of adoptions for homosexual families, I will do every I can to reach an agreement (…).I’ll vote yes to the Cirinnà Bill, if they remove the adoptions for homosexuals. I’m also in favour of the rights of homosexual couples. I’m absolutely open” (“La Repubblica”, February 5th 2016).

Merlo is right then when he writes: “whichever way you look at it, this law is another Porta Pia”,** since it ‘de-Vaticanizes’ (i.e. ‘de-Christianizes’ ) Italy”. (“La Repubblica” February 26th 2016). Yet, how can we ignore the ecclesiastical hierarchy’s responsibility in this de-Christianization of Italy? The Vatican reporter Giuseppe Rusconi notes that “bitterness and anger” besides being directed at Catholic politicians “are also aimed at another target: the Secretary General of the Italian Bishop’s Conference, Bishop Nunzio Galantino” (Rossoporpora” February 26th), top exponent of the “reaching-out Church” that instead “ of open and even hard discussion, particularly on issues regarding the family and life, prefers an all out imprecise dialogue with the power that is developed in corridors and friendly encounters”. In addition, not a word has been heard from the one who occupies the office as Bishop of Rome and is Primate of Italy.

In this respect, the law approved by the Senate is a serious defeat for all Catholics, including those who called the removal of the adoption of children by homosexuals (stepchild adoption) “a victory” for Family Day. It was precisely this “victory” however, that made the Renzi-Alfano agreement possible and which, as a result, has been a huge defeat for the Catholic world.

Any demonstration in the piazza is always a strong message sent to someone and the importance of Family Day is the fact that it happened. The Italian Catholic world has always been averse to grand public demonstrations since it has always tried to avoid open clashes with the adversary under the illusion of winning through compromise. We need to be happy then about the January 30th demonstration, as it revealed the militant spirit of a people from all over Italy gathered together through effort and sacrifice to allow their voice to be heard. However, we mustn’t confuse the base of Family Day with the representatives of the Catholic world. We mustn’t confuse the intentions and plans of the organizers of the demonstration with the strong message coming from that piazza.

The people of Family Day are a people that have lost a battle, but are determined to continue the war. And is doing so starting today, by marshaling for a integrally abrogative referendum of the law which introduces homosexual unions in Italy.

The next appointment is the March for Life in Rome on May 8th.

Notes
*Leone:Giovanni Leone, the sixth President of the Italian Republic (December1971- June 1978)
** Porta Pia: the breach of the Porta Pia: the Capture of Rome (20 September 1870) was the final event of the long process of Italian unification known as the Risorgimento, marking both the final defeat of the Papal States under Pope Pius IX and the unification of the Italian peninsula under King Victor Emmanuel II of the House of Savoy.
[Translation: Contributor Francesca Romana]
This article was originally published on Rorate Caeli and is re-published with permission.
$
Donate Now