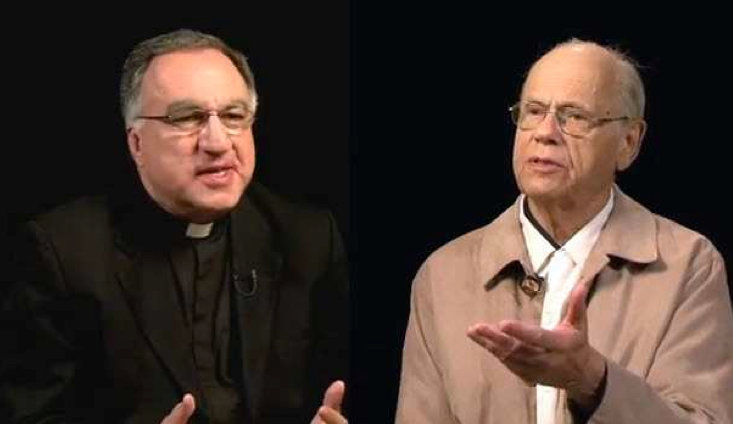 Editor's Note: Re-publication of this report is crucial given Fr. Thomas Rosica's large role at the current Synod on the Family and especially given his alarming press conference remarks yesterday on the homosexual issue.

TORONTO, 22 October, 2012 (LifeSiteNews.com) – Liberal Catholic press-people have recently touted a man some call Canada’s leading dissenter since the 1960s – former Catholic priest Gregory Baum – because of his role as an expert, or peritus, to the Canadian bishops at Vatican II.  Baum, an advocate of homosexual ‘marriage’ and sex outside of marriage and contraception, was lauded by Fr. Thomas Rosica of Salt and Light TV, Michael Swan of the Catholic Register and also given free reign in the pages of the Scarboro Foreign Missions magazine.

Had he merely publicly rejected Catholicism, Baum would not have been as grave a danger to the Church and especially its moral teachings.

Despite the automatic excommunication he incurred for marrying an ex-nun while still a priest, Baum continued to speak lovingly of Jesus and the Gospels as he repudiated many of the principles of faith and morals revealed by Christ and in Sacred Scripture.  One of the tools of repudiation was the dissenting Catholic New Times newspaper co-founded by Baum and other dissenters in 1976 and eventually prohibited from one diocese after another.

Such two-facedness led one of Baum’s contemporaries, canon lawyer Monsignor Vincent Foy, to consider Baum as having “done more than any person to harm the Church in Canada…” In an article sent into LifeSiteNews late last week, Foy recalls other concerning aspects of Baum’s history and even makes claims about “His Marxist background and activities”.

On his regular “Witness” program on Salt and Light TV, Fr. Rosica begins the October 7 interview by lauding Baum. “Professor Gregory Baum, it’s a great joy for us to have you on set with us for Witness on Salt and Light Television,” says Rosica.  (See trancript of entire interview here)

Although Fr. Rosica notes, “Gregory we’ve known each other for a long time…,” the Salt and Light CEO fails to mention Baum’s decades-long dissent from the teachings of the Church.  Fr. Rosica astonishingly goes on to state, “I’ve certainly admired very much your theology, your writings but also your love of the Church, your love of Christ, and you helped to keep alive not only the spirit of the Second Vatican council, but also the authentic teaching of the Council … you remain a faithful, deeply devoted Catholic, love Jesus, the Church, the Eucharist.”

During the interview, Fr. Rosica also sets up a dichotomy between what he calls those like Baum, who in his terms engage in “great theological search”, and those he calls “crusaders of orthodoxy.”

Fr. Rosica sees in those orthodox, the “pseudo-orthodoxy” who “are among the most unhappy and sad and angry that I’ve ever met.” In contrast he concludes the intimate television interview, saying to Baum, “Gregory, I want to thank you, You have been for me and continue to be a real model of hope – Gaudium et Spes – joy and hope.”

In his October 7 column in the Catholic Register, associate editor Michael Swan turns uncritically to Baum for comment on Vatican Council II, without ever noting his dissent, in two separate articles, The Church’s past weaved into the future and Canadian influence unmistakable at Vatican II.

Swan’s failure however is mitigated in the Register by a column by Fr. Raymond de Souza, wherein it is noted that Baum is a dissenter. Fr. de Souza’s corrective reads:

The presence of Gregory Baum, the former priest who at one time had a rewarding career proposing that the Church was wrong on just about every issue in which her teaching clashed with secular culture, set off alarm bells for those easily alarmed. He too was a peritus at the council. But at nearly 90 years old, Baum is a lion no longer. More than a theological force, he is now of principal interest as a relic of a time when the future of the Church was going to be an abrupt break with her past. Baum and his companions thought that Vatican II meant a new Church, adapted to the times and taking its lead from the ambient culture. The idea that the ambient culture of the late 1960s and 1970s was a special repository of wisdom was just one fatal flaw in that scheme.

The danger in touting Baum uncritically can be seen when he was given free reign in the Jan – Feb, 2012 edition of Scarboro Foreign Missions magazine. In the article he criticizes the Catholic Church for its failure in the kind of ‘dialogue’ he believes it should have – namely one that encourages the dissenting positions he embraces. Baum wrote:

In 1968 Paul VI published the encyclical Humanae Vitae condemning all forms of artificial birth control without an antecedent dialogue with the bishops and their people. In subsequent years, the Vatican controlled the world synod of bishops: its agenda and its final report were produced by the Roman Curia. Soon the bishops’ conferences were deprived of their teaching authority, and diocesan bishops were told to control the diocesan synod, determine their agenda and demand that people obey the present Vatican teaching. In the 1990s Catholics holding a position in the Church’s organization, including bishops, had to take an oath of fidelity to papal teaching, abolishing dialogue on this high level. The sad consequence of this opposition to dialogue has been the loss of the Church’s authority. Empirical research has shown that most church-going Catholics do not follow the papal teaching on sexual ethics. While Catholics have great respect for their hierarchical superiors, they do not necessarily follow their teaching.

Baum goes on to express his “great disappointment.”  In conclusion he presents his vision of the Church void of her moral teachings as the hope for the future – a future he says was wanted by Jesus Himself. “Faith in the Gospel continues to produce vital movements in the Church, groups of Catholics committed to social justice, protecting the environment, practicing meditation, developing theological insights, working for peace, serving the weak and the sick, supporting community development – and in doing so, welcoming God’s kingdom coming into the world,” says Baum.

However, as LifeSiteNews Canadian Bureau Chief Patrick Craine notes in his opinion piece today, “The truth is that all of the Church’s work in the social sphere is rooted in her moral outlook.”