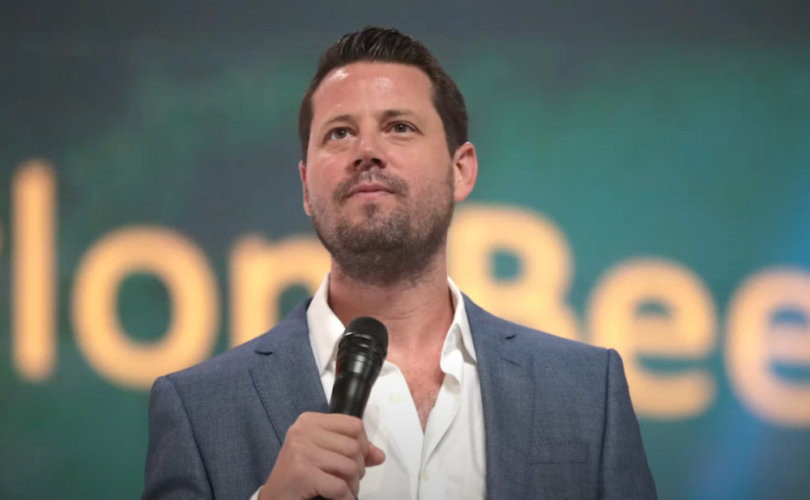 (LifeSiteNews) – In case you missed the news, Babylon Bee’s CEO will take part in Canada’s largest pro-life gala event in Ottawa on May 12 following the National March for Life. The Bee’s CEO Seth Dillon WILL NOT award the most pro-abortion Prime Minister in Canadian history with anything, but instead, will tell life-affirming Canadians how to tackle woke leftism, political correctness, and cancel culture with the razor-edged tool of satire.

Yes, the above headline is just satire. It turns out that joking is not only good medicine, but it’s one of the most effective ways at poking holes into leftist narratives.

Of course, Trudeau deserves no award, especially from pro-life advocates. It’s no joke that Trudeau’s Liberals are the party that champions death. His government is responsible for legalizing euthanasia, expanding abortion access in Canada, and for committing billions of Canadian tax dollars to funding and advocating for abortion overseas.

And, that’s not all. Trudeau has done more than any politician in the history of this country to cancel the pro-life voice.

Yes, Trudeau seems to have a vendetta against pro-life advocates.

But, thank goodness, the U.S.-based Babylon Bee, the number one satirical news site on the internet, knows a thing or two about cutting politicians like Trudeau down to size through the tool of satire.

Our Canadian Prime Minister has already garnered over 20 headlines and counting from The Bee.

Some of my favourites include:

You’re probably wondering what The Babylon Bee’s CEO Seth Dillon could possibly have to say to Canadians concerned with the state of life, family, and freedom in our country. Lots, it turns out.

MUST READ: Why Canadians should go in person to the March for Life in Ottawa this year

The Bee is run by conservative Christians who make jokes from a worldview where God matters, where truth exists, and where most people in power don’t care about one or the other.

That’s why Babylon Bee sees so much potential for satire in so many ungodly leaders in positions of power, especially those like Trudeau.

And the Bee knows that there’s sometimes a cost when you sting the bear. It knows a thing or two about cancel culture which tries to silence those who poke holes in leftist narratives.

The Bee was banned from Twitter in March after it tweeted out its headline about U.S. Assistant Secretary for Health “Rachel” Levine, a male who claims to be female, winning their “man of the year” award.

Seth, however, stood firm and refused to delete the tweet, stating: “They could, of course, delete the tweet themselves. But they won’t. It’s not enough for them to just wipe it out. They want us to bend the knee and admit that we engaged in hateful conduct.”

The Bee does not bend the knee to the left’s most cherished causes.

It was around this time that SpaceX and Tesla founder Elon Musk, who had previously sat down with the Bee for over an hour-long interview, confirmed with the Bee that it had been suspended by Twitter before asking his own 90-million Twitter followers in a poll if they thought the social media giant followed the principle of free expression. The majority voted no.

— Article continues below Petition —
PETITION: Tell the CPC to reinstate conservative leadership candidates!
Show Petition Text
5055 have signed the petition.
Let's get to 6000!
Thank you for signing this petition!
Add your signature:
Show Petition Text

In a short video for Campaign Life Coalition and the National March for Life, Seth said that his team of satirists are “no strangers to cancel culture for our Christian convictions, including the conviction that all life is precious and made in the image of God.”

Yes, the Bee has had fun poking holes in pro-abortion narratives too.

My favourite pro-life headline from the Bee: Matt Damon To Star In Pro-Life Thriller ‘The Unbourne Identity’

From the article: “Matt Damon’s Jason Bourne series isn’t finished with him yet. A prequel has been announced featuring Damon reprising his starring role as secret agent Jason Bourne, only this time he’s a fetus. The story follows Jason Bourne before he was born, revealing the backstory behind him being a baby.”

It continues: “Filmmakers say almost the entire movie will take place inside of Bourne’s mother’s womb as the fetus fights for its life against murderous abortion doctors trying to get to him with their tools of torture and death.”

Ha, only a genuine pro-life advocate would be able to come up with brilliant satire like that.

And, Seth certainly wears his pro-life credentials with pride.

In a non-satire piece penned last year, Seth came up with “Ten quick replies to common pro-abortion arguments and assertions.”

Seth’s piece takes some of the top pro-abortion talking points and utterly destroys them. In the piece, Seth tackles why he cares so much about the abortion issue.

“I guess my reply to anyone who’d wonder such a thing would be this: ‘Why don’t you care about this?’ The lives of countless innocent children are at stake in this debate. What could be more pressing or deserving of our attention than that,” he wrote.

We’re absolutely thrilled that Seth will be keynoting our Rose Dinner on May 12 following the National March for Life through the streets of Ottawa.

Seth will be joining us as part of a live virtual Q&A session where attendees can ask him questions. It’s going to be amazing to hear him speak and to get his take on what’s been going on here in Canada on the pro-life-and-family front.

Our annual Rose Dinner is a great opportunity to relax and celebrate life with fellow pro-life advocates, including Canadian and U.S. pro-life leaders. The event is perfect to meet un-sung heroes, mingle with other pro-lifers from across Canada, and listen to inspiring talks while enjoying an outstanding three-course meal.

Tickets are available to purchase at our website www.marchforlife.ca. But hurry, space is limited and going fast. Click here to buy your ticket.

This year’s Rose Dinner is being held at the Ottawa Conference & Events Centre, at 200 Coventry Rd. The evening opens up with a reception starting at 5:30 pm EDT, followed by dinner at 6:30.

That’s when Seth will speak. You won’t want to miss this event. Buy your ticket here.

This year’s National March for Life is on Thursday, May 12. The event will take place in person in Ottawa and will also be broadcast online through EWTN.com and on EWTN’s TV channel. Details can be found at Marchforlife.ca. Click here to find a full schedule of events.