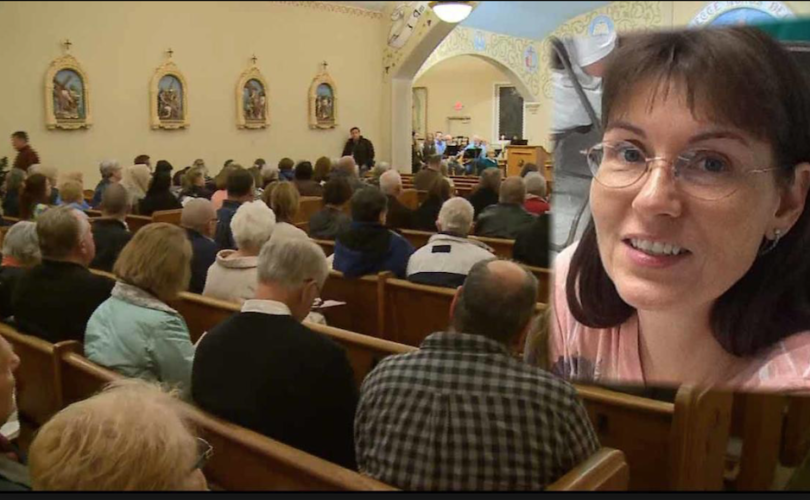 December 3, 2018 (LifeSiteNews) – Last Monday and Tuesday (November 26-27) I joined a great many others from the St. Louis and southwest Illinois areas in giving thanks to God for the life of Mrs. Jamie Schmidt, and paying our last respects to this noble woman who sacrificed her life rather than submit to sexual abuse.

Many LifeSite readers will already have seen my recent posting telling the harrowing story of how this gentle and devout 53-year-old mother of three, active in her parish church, was shot to death on November 19 in a St. Louis religious goods store when she refused the lust-driven demands of a brutal thug. I pointed out that the precedents already set by the Church in canonizing as martyrs others who died rather than commit impure acts (e.g., St. Maria Goretti and St. Charles Lwanga & companions) can lead us to hope confidently that in due course Jamie too will be raised to the altars. If so, she will be the first American woman martyr, and the first martyr of either sex whose blood was shed on United States soil (that is, since the foundation of this Republic). However, I would warmly recommend that readers who already saw my article go back to look at the updated version (available here), which corrects a few mistakes and adds new and even more inspiring information about the way this remarkable lady met her death.

The time for Mrs. Schmidt’s visitation at Chapel Hill Mortuary in Cedar Hill, Missouri, was announced as Monday 26, from 4:00 till 9:00 p.m. I drove the 35 miles there from downtown St. Louis, and as I arrived at the facility at about 7:30 p.m. my jaw dropped as I saw the huge mass of cars – hundreds of them – packing and then overflowing every corner of the spacious grounds. My church and rectory are only ten minutes’ walk from the Busch Stadium, and the image that flashed through my mind was one of its big parking lots during a Cardinals’ game, rather than folks at the wake of someone who had been completely unknown to the general public until her death a week earlier. After finding a tight parking spot for my little Toyota Echo, I entered the building, and the analogy in my mind now switched immediately to that of a crowded airport security point. For the spacious outer parlor of the funeral home was so packed with visitors that four back-and-forth lines snaking up and down the full length of the room had to be formed in order for them to reach the next, intermediary room, which in turn had to be traversed slowly before they could reach the mortuary’s chapel.

I learned the next day, talking to folks at Jamie’s funeral, that some of them had waited two and a half hours in line before they were finally able to approach and see this holy woman lying in the solemn peace of death. As for me, I have to confess that after standing in line for ‘only’ an hour or so, I gave way to what some might call a tad of clericalism, accepting an invitation to jump the queue – as a priest. It so happened that a lady standing near me had been a personal friend of Mrs. Schmidt. Seeing my clerical collar, she introduced herself as Tina, asked what parish I was from, and we started talking. It soon came to light that she had seen my original LifeSite posting last Saturday, liked it, and had shared it with other parishioners, including Jamie’s grieving husband Gregory and their three children, the youngest of whom is still in high school. Tina and her husband Ken then offered to take me straight through the crowd to the chapel, to introduce me to Mr. Schmidt and others of Jamie’s family. I didn’t say no.

I was relieved to find that Greg Schmidt, also a devout Catholic and Knight of Columbus, appeared quite relaxed and composed. A week after the tragedy, he was now able to greet quietly but cordially the stream of visitors coming to pay their last respects to his high school sweetheart who then became, in his own words, “my best friend, my all, the love of my life” throughout 28 years of faithful Christian marriage. He also told me he appreciated my LifeSite article about Jamie and her potential for recognition as a martyr, but suggested some amendments which, together with further information I learned from other parishioners at the funeral the next morning, are now incorporated in the updated version (see above link). I then approached the casket and prayed briefly, in awe and not without tears, before this singularly pure and brave lady now lying serenely asleep in the Lord.

Her husband’s own serene demeanor that evening, and that of their children, two of whom I was also able to greet briefly in the chapel, indicated to me how much the family had been buoyed up, strengthened, and consoled by this spontaneous and massive outpouring of sympathy, honor, and esteem – not only from friends, relatives and fellow parishioners, but from innumerable strangers such as myself. We had all been so deeply moved just by reading and hearing about this drama that we took valuable time out, and drove some distance, in order to see and pay tribute to this extraordinary woman.

And indeed, that impressive, unorchestrated public response was, for me, the main take-away as I drove home in silence from the funeral parlor that night. In the first Christian millennium, before the Church had developed any formal canonization procedures, her recognition of saints – first, the martyrs under Roman persecution, and later many others who died peacefully – was based principally on the development of a popular, grass-roots cultus among the People of God toward certain Christians who had earned a reputation for outstanding virtue and died, as the time-honored phrase puts it, “in the odor of sanctity.” This kind of spontaneous widespread veneration has been seen as one manifestation of the sensus fidelium – “sense of the faithful” – produced under the influence of the Holy Spirit, the Soul of the Mystical Body of Christ, the Church. And I felt I had just witnessed the first fruits of precisely such an influence at Chapel Hill Mortuary that evening.

That feeling was reinforced the next morning when I went to the funeral Mass at the Schmidts’ parish, St. Anthony of Padua, at High Ridge, MO (pop. 4,300), 25 miles southwest of downtown St. Louis. It’s an attractive, medium-sized church (visit stanthonyhr.org for photos), with classical-styled sculpted Stations of the Cross adorning the nave, and the tabernacle placed where it should be: right in the center of the sanctuary, behind the altar. Under the guidance of the pastor, Fr. John Reiker, the parish website features a short, solid, and to-the point mission statement emphasizing the call to holiness and its fundamental link to Holy Communion, and citing several paragraphs of the Catechism of the Catholic Church that set out our basic Eucharistic doctrine.

In the sacristy before Mass, and afterwards at lunch in the church hall, I had an opportunity to learn a little more about Jamie in conversing with two deacons who serve in the parish, and with several other parishioners. They were unanimous about what a lovely, faith-filled person she was – modest, gentle, cheerful, always ready to help, using her musical and artistic talents in God’s service, and showing a zeal for souls in working with women’s retreats and promoting the Rosary. Indeed, in a poignant touch of God’s Providence, it was the latter apostolate that occasioned Jamie’s death: she had gone to Catholic Supply that afternoon to buy materials for making Rosary beads.

What struck me most deeply in these conversations, however, were new details I learned about how Jamie confronted her assailant. One lady told me how a friend of hers had just been talking to one of the two survivors of this atrocity, who recounted what happened right after she and the other store worker had been sexually abused at gunpoint. When the perpetrator then turned his revolver toward Mrs. Schmidt, demanding the same submission, she looked straight at him and said firmly, “In the name of God . . . I will not take my clothes off!” It was those words that elicited the fatal bullet driven into her head; and I was told that according to this witness, and another one later on at the hospital, Jamie could be heard murmuring the words of the Our Father as she lay in agony on the floor, and whispered them that evening with her dying breath.

What words can adequately express the response of a Christian heart to such testimony? I found myself simply recalling those of the Holy Spirit: “Precious in the eyes of the Lord is the death of his faithful ones” (Psalm 116: 15).

By the time the funeral Mass began at 11:00 a.m., the church was packed, and the mourners included an honor guard of candle-bearing ladies dressed in white who represented an apostolate they shared with their deceased friend – organizing three-day ACTS retreats (which I was told have borne much spiritual fruit). I joined in concelebrating the funeral Mass with two other priests who had known her, and with Fr. Reiker, the chief celebrant. After Communion a recorded song was played, and the priest at my side turned and whispered to me, “That’s Jamie.” Indeed, it was a lovely voice, clear and gentle, that was filling the church, singing with guitar accompaniment a modern, popular-style song about Jesus.

More classical in genre was her recent art work, adorning the four-foot high wall of the rear choir loft. One of her friends told me that Jamie sometimes showed visitors round the church, and when they expressed admiration for these paintings, she would just smile, never letting them know she was the artist. There are four large, finely painted and ornately framed medallions depicting the traditional symbols of the Evangelists (Matthew, a man; Mark, a lion; Luke, a bull; and John, an eagle). With two of the medallions on either side, a larger central oval shows another ancient symbol: the risen Redeemer as the Lamb of God bearing a white victory banner, and underneath, the words “I am the Way, the Truth and the Life.”

Jamie now shares that victory, I thought as I contemplated her paintings. And indeed, her Lion of St. Mark also took on that morning a new significance that she herself would have been the last to anticipate. The homily at the funeral Mass was preached by her friend and mentor the Rev. Mr. James G’Sell, a permanent deacon serving at St. Anthony’s. In the most memorable lines of an eloquent and impassioned funeral oration in which he openly called her a martyr, he quoted forcefully the first words – “In the name of God!” – with which Jamie, upholding her honor and her marital sacrament, had rejected the aggressor’s demand. “With this defiance of the pure evil confronting her,” the deacon continued, “this gentle woman did not just speak. She roared like a lion!”

Indeed. He also mentioned in his homily that he had heard a young parishioner, awestruck by Mrs. Schmidt’s supreme sacrifice, spontaneously make a still more daring comparison: “She crushed the head of the serpent!”

May that crushing roar against satanic malice, truly a glorious participation in the mission of the Immaculate One whose Feast as our U.S. Patroness we’ll celebrate next week, now begin to echo down the annals of the Church in America! For, immersed in the mire of an increasingly perverse and sex-saturated culture, we have surely never needed more urgently than now the example of heroic purity – purity unto death – to inspire young people, couples young and old, families – all of us!

Please pray that the cause for beatification of Jamie Schmidt, potentially our nation’s first woman martyr, may be initiated soon in the Archdiocese of St. Louis.

Will this be the first American-born woman martyr?