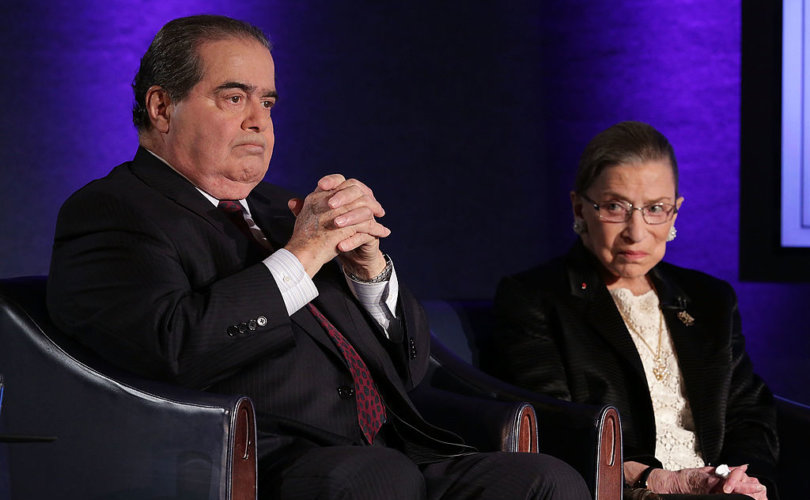 Supreme Court Justices Antonin Scalia (L) and Ruth Bader Ginsburg (R) wait for the beginning of the taping of "The Kalb Report" April 17, 2014 at the National Press Club in Washington, DC.Alex Wong/Getty Images

October 20, 2020 (LifeSiteNews) – Friendship between two people always contains an element of mystery. What brings friends together? What keeps them together, especially those long-term friendships that stand the test of time and survive disagreements and misunderstandings?

It's a question I've often puzzled over, especially when I think of the deep friendship between G.K. Chesterton, the Apostle of Common Sense, and George Bernard Shaw, the playwright. Their philosophies of life were diametrically opposed. Chesterton was a truth-seeker whose search led him into the Catholic Church; Shaw was a committed secularist who called himself an atheist, although scholars say his religious views were more complicated.  And yet these polar opposites experienced a long, enduring friendship without ever coming to agreement about foundational principles. Chesterton criticized Shaw for his vile ideas on eugenics. Shaw found Chesterton's faith incomprehensible. Nevertheless, they remained friends throughout their lives, and in fact, in his autobiography, written shortly before his death, Chesterton paid tribute to Shaw:

“I have argued with him on almost every subject in the world, and we have always been on opposite sides, without affectation or animosity. . . . It is necessary to disagree with him as much as I do, in order to admire him as I do; and I am proud of him as a foe even more than as a friend.”

As for Shaw, he truly was a friend to the Chestertons. When they were financially strapped, he often suggested a public debate which drew large crowds since Shaw was one of the most popular figures of his day. They could count on selling plenty of tickets for the event. After Chesterton's death, Shaw assisted his widow, Frances, financially.

The antagonists often took good natured jabs at each other as this exchange illustrates:

Chesterton: “One look at you Mr. Shaw, and I know there is a famine in the land.”

Shaw:  “One look at you Mr. Chesterton, and I know who caused it.”

I reflected on these two strange bedfellows after the death of Ruth Bader Ginsburg. Why? Because of the long-term friendship between Antonin Scalia and Ruth Ginsburg, another pair of strange bedfellows and polar opposites. What brought this devout Catholic, a daily communicant, and this secular Jew, a devout champion of abortion, together? Obviously their love for the law was a common denominator, but they came at it from widely divergent perspectives.

Ginsburg devoted herself with gusto to the murder of babies in the womb as a legal right.  Although she didn't like Roe and would have preferred the “right” to abortion to be based on equality vs. privacy, she embraced unrestricted abortion as absolutely necessary for the advancement of women. Scalia, in contrast, embraced Catholic orthodoxy and the dignity and sanctity of life from the first moment of conception until natural death. He eloquently defended babies in the womb waiting to be born.

And yet, despite their monumental differences, the Ginsburg and Scalia families often socialized together, and “Nino” and “RBG” shared many interests that they enjoyed in tandem: love of opera, hunting, and even souvenir shopping. Following Scalia's death, Irin Carmon, co-author of Notorious RBG, wrote in the Washington Post:

One former clerk told us Scalia was Ginsburg’s favored souvenir shopping buddy when they traveled together. On a trip to India, they famously rode an elephant, with Scalia sitting up front. What about feminism? “It had to do with the distribution of weight,” Ginsburg deadpanned slyly. They shared New Year’s Eves with their families and friends: “Scalia kills it and Marty [Ginsburg, Ruth’s husband] cooks it,” recalled one guest, former Bush solicitor general Theodore Olson. “I never heard them talk about anything political or ideological, because there would be no point,” Ginsburg’s grandson, Paul Spera, told us. In 2010, when Chief Justice Roberts announced Marty’s death from the bench, Scalia wiped tears from his eyes.

Like Shaw and Chesterton, Ginsburg and Scalia never held back the barbs of criticism over differences in their legal opinions. And yet those differences didn't seem to affect their friendship. Scalia's son Eugene wrote this after Ginsburg's death:

What we can learn from the justices, though — beyond how to be a friend — is how to welcome debate and differences. The two justices had central roles in addressing some of the most divisive issues of the day, including cases on abortion, same-sex marriage and who would be president. Not for a moment did one think the other should be condemned or ostracized. More than that, they believed that what they were doing — arriving at their own opinions thoughtfully and advancing them vigorously — was essential to the national good. With less debate, their friendship would have been diminished, and so, they believed, would our democracy.

I admit that I still find their close friendship not only baffling, but repugnant. As a mother and grandmother, I can't imagine hobnobbing with someone who spent her career cooperating with an evil so grotesque and on such a monumental scale that it dwarfs every other holocaust in history.

And yet….and yet…we are called by Jesus to love our enemies, to do good to those that hate us. And true friendship seems to me to be among the highest goods. Fr. Gerard Saguto recently reminded me of that obligation with an article on the FSSP website titled All the Way to the End where he wrote this about the Ginsburg/Scalia friendship:

Justice Ginsburg was given at least one grace in full view…her close friendship with the late Justice Antonin Scalia, a devout and principled Catholic whose voting record on the key issues reflected the God He loved and the Faith he internalized. The two could not have been more opposite in terms of world view; undoubtedly they locked horns often…but their passion for law and other mutual interests outside the Court served to unite them. She admitted that he was formidable in his challenges to her; his masterfully written dissents and arguments would merit thoughtful consideration, and she valued that. This intrigues the media, and should actually intrigue us, because there is something quite noble about it: in these days of such polarization that people who disagree cannot sit around a table, let alone be friends, here are two who could, and did. Given the man Justice Scalia was, we can likely surmise the type of friend he was as well. Only God knows how many Rosaries he prayed and how many Masses he offered for his dear friend Ruth, that she come to know and love the divine Judge who was the inspiration and model of his own career as a judge, and who ought to become the one for hers.

The Scalia and Ginsburg friendship reflects a similar paradox as the friendship between Chesterton and Shaw. Ironically, the 21st century odd couple even bears a physical resemblance to their predecessors with the abundant girth of Scalia and the diminutive size of Ginsburg. Their wit and humor also echo the wit and humor of the Chesterton/Shaw exchanges.

Another paradoxical friend of Chesterton's was sexual libertine and eugenics advocate H.G. Wells, author of The Time Machine and other works. In a letter to Chesterton, Wells once wrote, “If after all my Atheology turns out wrong and your Theology right I feel I shall always be able to pass into Heaven (if I want to) as a friend of G.K.C.'s. Bless you.”

Perhaps the same could be said of Ruth Bader Ginsburg and her friendship with Antonin Scalia. I have no doubt that Fr. Saguto is correct in his assessment that Scalia prayed for RBG. Real friends, after all, show the greatest love by laying down their lives for the other in sacrifice.

As we approach the month of All Saints and the Poor Souls, may we increase our prayers for those teetering on the brink of the abyss and those we fear are lost. What better way to be a friend to Christ than to offer our lives for poor sinners! As Our Lady said to the children at Fatima, “Pray, pray very much and make sacrifices for sinners. Many souls go to hell because they have no-one to pray and make sacrifices for them.” Let us not hear on Judgment Day that the prayers we failed to say and the sacrifices we failed to perform could have saved a poor sinner from hell.