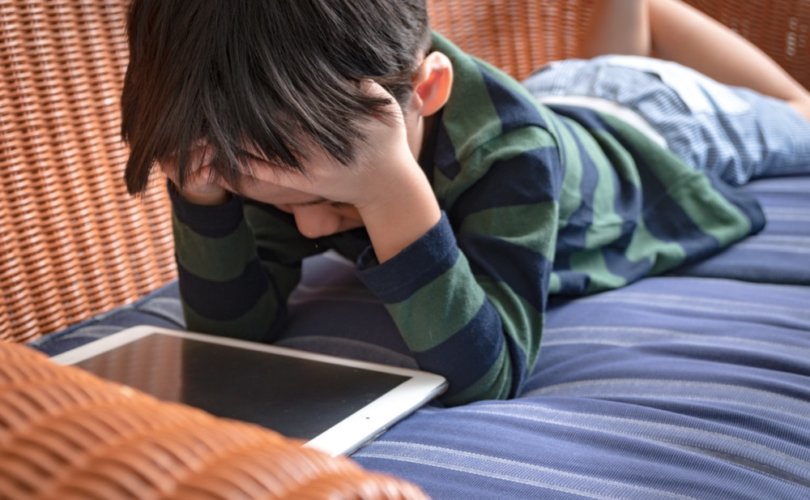 August 31, 2020 (The Catholic Thing) — The U.S. education system spent more than $26 billion on technology in 2018. Spending on new or updated technology in American education in 2020 is estimated to be something in the area of $56 billion. To put that into perspective, that is equivalent to hiring 400,000 new teachers at $70,000 per year (more than most teachers make) for two years, which is the length of time that “new” technology will last before being replaced.

Most Catholic schools have not been able to keep up with this level of state-funded largesse, so naturally they have been more eager to open up for in-person classes. Perhaps this is why academic bureaucrats would prefer they remain closed.

But hasn’t the expense been worth it? I mean, it’s our children’s education, isn’t it? What could be more important?

Well, let’s examine the evidence. The University of Washington’s Center on Reinventing Public Education examined how 477 school districts nationwide have responded to the COVID-19 crisis. The report found only 27 percent of districts required teachers to record whether students participate in remote classes.

Meanwhile, remote attendance has been abysmal. During the first two weeks of the shutdown, some 15,000 Los Angeles students failed to show up for classes or do any schoolwork.

Only 57.9 percent of school districts do any progress monitoring, the report found. The rest haven’t even set the minimal expectation that teachers review or keep track of the work their students turn in. Many schools, including colleges and universities, offered students a pass/fail option rather than requiring a standard grade.

Okay, so there were some problems. But those problems are going to be fixed now, right?

I am afraid that the response to this catastrophic failure in the great nationwide experiment in online learning has been the usual bureaucratic response to all failures: namely, that we must double down on what didn’t work. We just didn’t have enough technology; we just didn’t spend enough money; we didn’t have time train our functionaries (aka “teachers”) and do it right. But now (you will hear administrators across the country promise), we have beefed up our tech, and we’re ready. You are going to be dazzled and amazed.

Since this is a generation brought up on CGI and Star Wars movies, somehow I doubt it. And, of course, the point of educational technology isn’t to dazzle and amaze, it is to educate. So how are we doing?

Well, as the Paris-based OECD Programme for Institutional Student Assessment most recently found when they tested over 540,000 students in seventy-two countries with exams on reading, science, and mathematics:

classroom usage of all of the most advanced equipment was associated with worse student performance on every type of exam. Students using tablet computers at school saw on average a 10 percent lower math test score versus peers who didn’t. E-book reader use meant an 18 percent lower score in reading. Desktops, laptops, internet access, and Wi-Fi all were linked to lower scores. Even the widely touted interactive whiteboard was associated with worse results in reading, science, and math.

Wasn’t there any technology that offered meaningful improvements in learning outcomes? There was one: the decades-old overhead projector.

Every good teacher I know bans laptops and cell phones in the classroom. Then again, so does the most popular private school in Silicon Valley, as does the elite private school in Sydney, Australia, which is the alma mater of three prime ministers. The headmaster said the school found “money spent on interactive white-boards, laptops, and the associated software was a total waste.”

Be assured, none of this has kept many school administrators from spending absurd amounts on the latest technology so they can lure students back during the pandemic. Will any of that tech produce the educational quality promised? All evidence suggests the answer is no.

Students themselves seem aware of this, since many of them around the country are asking for refunds or discounts if they are only going to be offered second-rate “online” classes. Administrators who have spent millions upgrading their tech and teachers who have spent hours and hours preparing new materials for online learning are not likely to be especially sympathetic to this plea, and most haven’t been.

The greatest danger of any crisis is the inability to learn the lessons it should teach. Will the online, “tech” mania pass with the passing of the coronavirus pandemic? Is the online experience a temporary solution to a passing problem?

I wouldn’t bet on it. Having spent billions on new tech while firing actual faculty members, administrators will be loath not to use their new gadgets to “transform” education. Since fewer academic administrators have had much, if any, experience in the classroom, and more and more of them have little, if any, respect for their faculty, and given the billions being invested by companies on the promise of future sales of educational technology, it is increasingly unlikely that the educational failures of the technology revolution will be trumpeted as anything other than a series of marvelous successes.

Okay, perhaps there may be “glitches” that some of the naysayers will harp on. But those problems will be corrected, we will be assured, in the next series of ever-more-expensive purchases on ever-more-wonderful machines.

The “tech revolution” certainly is transforming American education. Perhaps this is one reason today’s students can’t read, write, or do math half as well as their grandparents did. Wise teachers know how to use technology and when not to. So if you are convinced, as you should be, that no machine can replace you as a parent, let me assure you that no machine can replace an actual teacher either, someone who knows your son or daughter in a way a computer never can.

And if you know that real parenting cannot be done over the telephone or by Zoom, then be assured real teaching can’t be done that way either.