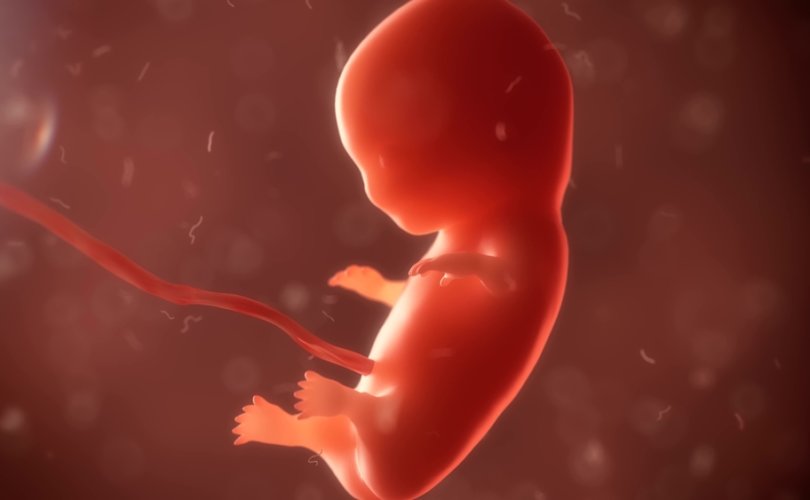 March 9, 2017 (ThePublicDiscourse) — When does life begin? According to the United States Supreme Court, a number of politicians including President Barack Obama, and a variety of other sources, there is still much debate in the realms of science and medicine as to how to answer this charged question. A popular deflection is to say something like “It’s above my pay grade to answer that,” or “If scientists are still debating this, who am I to speculate?”

The truth is that science already has answered this question, loud and clear. It’s really pretty simple. You take an egg from a female and a sperm cell from a male. The sperm penetrates the egg. And now you have one cell with the complete amount of genetic material needed for everything a human could ever want to do.

Even this may not be enough to convince skeptics. A few months ago, I was debating the issues of when life begins and the autonomy of the early embryo with some of my colleagues. I was surprised to hear that they still rely on the party slogan: “Early on, it’s just a clump of cells.” In the lab where I work, we study cell division. As scientists, my colleagues must concede that embryos are made up of living cells, but they don’t accept the embryo as a living organism. If the early embryo is “just a clump of cells,” then you can justify abortion. By this logic, it’s not an autonomous being, and it’s definitely not a human person yet. It’s just a few cells growing in the mother’s body, and so the mother can choose to get rid of those cells if she wants to.

The Autonomy of the Embryo

If we define organismal autonomy to mean freedom from external control, it turns out that we can identify precisely when an embryo satisfies the definition of autonomy: from the very beginning. A recent study published by Marta N. Shahbazi and colleagues from the UK demonstrates that this newly formed cell knows what to do post-conception regardless of whether or not it receives signals from a host uterus. Shahbazi and colleagues demonstrate in their study that a fertilized egg—also known as a zygote, the “product of conception,” the early embryo, or one of many other descriptive terms—is an autonomous living being. This one little cell, with its complete genetic content, can and does begin to divide and to grow, even in an experimental dish in an incubator in the closet space of some unmarked lab.

Shahbazi and colleagues thawed out frozen embryos that were donated to their research group from an IVF clinic. The embryos had been frozen after fertilization, and they were at various stages of first-week (pre-implantation) development when they were thawed. Shahbazi and colleagues then grew these embryos past the point at which they would normally implant themselves into the uterine lining, using an in vitro culture system of their own design. They reported that these cells can successfully organize themselves despite not being implanted in a uterus. This means that, as we suspected, embryos know what they’re supposed to do to live, and they try to live, whether they’re in their mother or not. As the authors state in the paper, their culture system “allows human embryos to undergo the pre- to post-implantation transition in vitro, in the absence of any maternal tissues.”

The reason the Shahbazi study is so critical is because they aren’t forcing these embryos to divide, nor are they giving them any instructions. When we work with non-embryonic cells in our lab, we refer to these cells as “immortalized,” because they’ve been manipulated such that they will continue to divide when we grow them on plastic dishes in our incubators. But the embryos grown in this experiment were not manipulated or forced to keep going. They grew of their own accord.

A newly fertilized embryo may not know whether or not it is “wanted,” but it does know that it wants to live. In fact, the embryo has two big missions from its moment of conception: one is to start dividing, and the other is to get from the mother’s fallopian tube down into the lining of her uterus. The embryo needs to implant successfully because it only has enough organismal resources for a limited number of days—it needs to nestle in to the nutrient-rich endometrium of its mother in order to acquire more food for the journey. This is why most “contraceptive” drugs and devices actually work as abortifacients. Rather than preventing the sperm from fertilizing the egg, they prevent the embryo from properly implanting. Without the nutrients normally provided by implantation, the embryo will die. But, as Shahbazi and her colleagues have demonstrated, if you supplement the embryo with nutrients, it will continue to fight for life.

We already knew that the developing embryo communicates with the mother through signals and nutrient exchange in the bloodstream, but now we know that the embryo is programmed for survival from day one. Whether or not mom is around, the embryo has the equipment it needs to drive its own growth forward. And so in the absence of any signals from a maternal uterus, the embryo defaults to a pro-survival, pro-growth, pro-life trajectory.

The rather chilling implications of these findings should make us reevaluate the premises on which we allow research to be conducted on human embryos. This work eliminates the possibility of saying that the early embryo is not an organism or is not autonomous. In fact, the authors refer to the “critical remodeling events” of these embryos as “embryo-autonomous.”

And yet, even within this manuscript, the juxtaposition between the text of the article and its ethics statement is jarring. This contrast vividly illustrates the discrepancy between what science is saying and what people are choosing to hear. “Implantation is a milestone in human development,” write the authors in the discussion section. “Informed consent was obtained from all couples that donated spare embryos following IVF treatment,” reads the ethics statement. “We are grateful to the patients donating their embryos,” the authors write in their acknowledgments.

On one hand, the data show that these embryos are autonomous human beings who are simply in an early stage of development. On the other hand, the licensing ethics boards and authors themselves justify the destruction of these embryos by categorizing them as the property of the couples who donated them. The authors act as if the embryos’ empirically verified capacity for autonomous development need not translate to the recognition of the autonomy of human embryos.

Back in 2008, well before the newly published Shahbazi paper, Robert P. George and Christopher Tollefsen relied on other embryological studies in their book Embryo: A Defense of Human Life. There they reasoned: “Nothing extrinsic to the developing organism itself acts on it to produce a new character or new direction of growth.” This claim rapidly unnerved critics, as evidenced by William Saletan’s New York Times Sunday Book Review response, “Nobody with a womb would describe pregnancy this way.” Saletan implied that George and Tollefsen had cherry-picked from embryology textbooks in order to fit science into their reasoning. At that point, many scientists viewed the early embryo as part of a system controlled by the mother, and so perhaps there was a degree of misunderstanding of the philosophical point George and Tollefsen were making.

But as George and Tollefsen and others (such as John Finnis and Patrick Lee) have explained, organismal autonomy in animals and personhood are not interchangeable terms. Not all animals, after all, are persons, even though they are autonomous organisms. But George and Tollefsen highlight that an organism with all of the capacities to become a recognizable (and extra-uterine) person is in fact already a person, because even if the organism's capacities are not yet fully developed, they are still present in the early embryo. Personhood is determined, they argued, not by immediately exercisable capacities, but by radical (root) capacities. So a human embryo has all the same radical capacities as the fully developed human adult. Both are persons.

Saletan’s response illustrates a common misunderstanding of this distinction. He implies that an embryo does not qualify for personhood. Essentially, he makes no distinction between immediate biological functioning and personhood. And as a result, Saletan claims that we “don’t owe [an embryo] the same respect we owe one another,” arriving at this conclusion through the type of reasoning found in the acorn and oak tree analogy proposed by Michael Sandel. (Briefly: although every oak tree was once an acorn, no one gets bent out of shape when an acorn is lost, even though the acorn has the capacity to become an oak tree).

But as Robert George and Patrick Lee point out, we value instances of the oak species because of their instrumental value, and thus we value an oak tree more than an oak acorn, even though they are the same entity. But we value instances of the human species because of their intrinsic value, and thus we value all human beings at all stages of development equally. Human beings don’t acquire personhood at some developmental milestone.

Now that the Shahbazi study has demonstrated, as George and Tollefsen reasoned, that the early embryo has all the capacities to develop its organism autonomously, it would be interesting to know whether this would be sufficient evidence for Saletan to rethink his stance on personhood. The question for all of us now is whether we will start acknowledging that the biological autonomy of embryos should translate into ethical and legal personhood.

So let’s stop deflecting. It’s time to own up to the truth. Science has already affirmed what we have long since suspected: we can call them fertilized eggs, zygotes, morulas, blastocysts, products of conception, embryos, or fetuses, but that doesn’t change reality. And that reality is this: they are autonomous humans from the very beginning.

Ana Maria Dumitru is a sixth-year MD/PhD candidate at the Geisel School of Medicine at Dartmouth College.