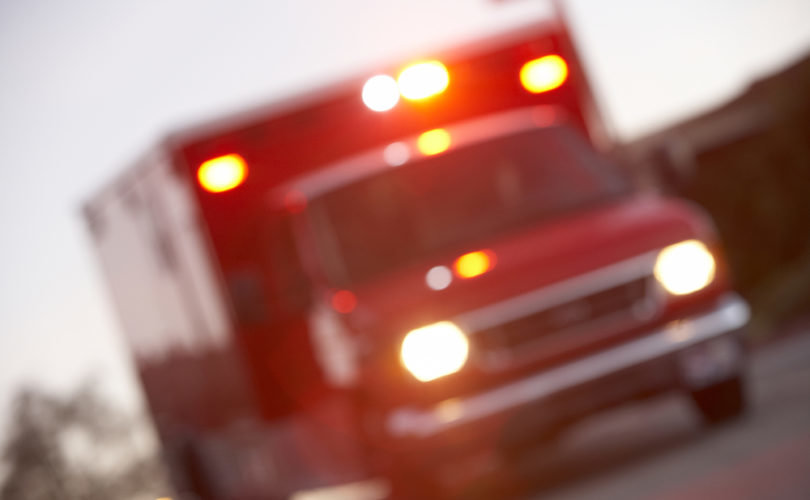 April 30, 2015 (ProLifeAction.org) — This morning, I was sidewalk counseling at our local Planned Parenthood in Aurora, Illinois when I saw a woman arrive with a male companion. One look was enough to see that something was wrong.

She was slumped in her seat in her car and stumbling as she exited the vehicle. As she approached Planned Parenthood’s door she vomited on the sidewalk.

My friend Sandy was counseling with me and offered her help, saying she looked like she was not well and Planned Parenthood wasn’t equipped to offer the help she needed. We had no idea at the time how right Sandy was.

I continued counseling and Sandy left a little while later. After about an hour, the woman’s friend came out of the clinic alone. As he walked to his car, I told him if his friend was there for an abortion, it was not too late to get her out and get her real help.

He said she had diabetes and the baby was going to kill her. I told him there were people who could help with that without killing the baby and offered him a pamphlet for our local pregnancy resource center. He declined, but I insisted, saying, “It’s free. What can it hurt to take the information?” In the end he took the pamphlet and drove away.

Ten minutes or so later, an ambulance came pulling down the street with its lights and sirens blaring as you can see in the video above. I knew the second I saw it that it must be there for her.

A few minutes later, a gurney came out the side exit carrying the girl from earlier. She was crying loud enough for me to hear on the opposite side of the parking lot. The EMTs loaded her on the ambulance and stayed a while, presumably to stabilize her before transport, as we often see them do. Seconds before they left, her companion from earlier returned, tearing into the parking lot, and followed the ambulance away.

We don’t know what happened to this woman. Another counselor who was with me suggested it might have been a chemical abortion gone wrong, and she was returning for help. It’s possible she just had morning sickness as a result of her pregnancy, but if that’s so, something went horribly wrong inside the clinic.

Please keep this woman in your prayers. We have requested the 911 call audio from the city, which will hopefully provide some more context. We’ll report back with more when we receive that along with more video of the incident, but in the meantime, let’s pray for all Planned Parenthood’s victims, born and unborn.