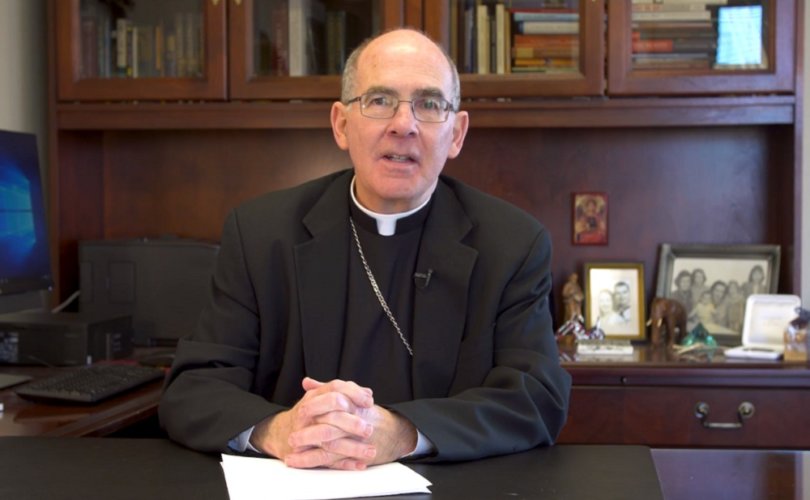 August 30, 2019 (CatholicCulture.org) — After the publication of an an AP story about a man who received a blessing in a Catholic church just a few days before committing suicide, the Seattle archdiocese released a statement that read in part:

The Associated Press story about Mr. Fuller is of great concern to the Archbishops because it may cause confusion among Catholics and others who share our reverence for human life.

Confusion? The AP story was not confusing at all; its message was crystal-clear. A man had received a blessing in a special ceremony arranged by his parish before he carried out his plan to take his own life — and, for good measure, to enter into “marriage” with his male partner just before the suicide. The implication was unmistakable: the parish approved of Robert Fuller's plans. The problem was not “confusion”; it was scandal. If the AP story was accurate, this was an outrage, a grotesque offense against the faith.

So, was the AP story true? Neither in its original response nor in a follow-up statement did the archdiocese deny the essential accuracy of the news report. The statements, taken together, claim that while the report was not inaccurate, it was misleading — “confusing,” you know — because “a very different reality was at work.”

“At the time of this photo, parish leadership was not aware of Mr. Fuller's intentions,” the archdiocese said in the initial statement. “It wasn't until later that parish leaders learned of his plans.” The follow-up made a subtle distinction between the priest who gave the blessing and the pastor, but insisted that neither was aware of Fuller's intentions. Once the pastor was made aware of Fuller's plan to kill himself, the archdiocese said, the pastor met with the man “and tried to convince him to change his mind.” That effort failed, obviously.

Nevertheless the parish — with the support of Archbishop J. Peter Sartain — allowed a Catholic funeral for the deceased, “with certain conditions to ensure there was no endorsement or other perceived support for the way in which Mr. Fuller ended his life.” And what might those conditions have been, do you suppose? They certainly failed, too. Several months later, thanks to the AP story, the world was given the very clear impression that the parish did support Fuller's choices.

Thanks to some solid reporting by Christine Rouselle of CNA, we now know that Fuller was a longtime member of the Hemlock Society, which supports euthanasia, that he admitted to helping a friend commit suicide years ago, that he had discussed his own suicide plans with friends in the parish, and that he claimed: “my pastor/sponsor has given me his blessings. And he's a Jesuit!!!”

The pastor of St. Therese parish is not a Jesuit. But the priest who gave that blessing on May 5, Father Quentin Dupont, is  —although it is not clear that he is the Jesuit to whom Fuller referred. The archdiocesan statement claimed that Father Dupont was a visiting priest, who did not know Fuller's intentions. Rouselle's CNA report gave a rather different perspective: that Father Dupont “regularly celebrated the Sunday Mass that Fuller normally attended.” On May 3 — before the Mass at which he received his special blessing — Fuller announced that he had a week to live, and invited parishioners to his “end of life celebration party.”

After a quick investigation of the facts, the archdiocese admitted that “some of Mr. Fuller's friends at the parish knew of his intentions,” while continuing to maintain that the pastor, and Father Dupont, did not. That is possible, certainly. It is possible that the priests were in the dark, that Father Dupont was not the Jesuit who gave Fuller his approval, or even that there was no Jesuit who gave his blessing to the suicide. All possible. But probable? Unfortunately the past twenty years have not been kind to the credibility of Catholic bishops, and one reads the statements from the Seattle chancery with a skeptical eye.

The AP story includes a line that encourages such skepticism: “St. Therese Parish was known for accommodating a range of beliefs.” You get the message, don't you? This is one of those parishes: a parish in which a man can be active and comfortable although he espouses (and practices) homosexuality, euthanasia, and shamanism. There may be some confusion about the exact circumstances of the ceremony that was captured by the AP photographer. But there should be no confusion about the spiritual health of that parish.

This was a case of grave scandal. To call it “confusion” is unworthy of successors to the apostles.