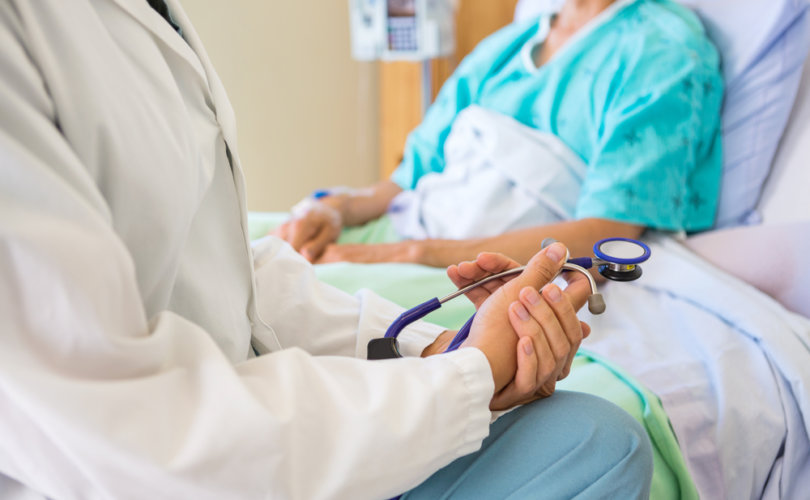 April 3, 2017 (BreakPoint) — Last year, Canada enacted a Medical Aid in Dying law. The legislation allows physicians to help gravely ill patients end their lives. Advocates of these sorts of laws justify it by using words such as “compassion,” and “death with dignity”—and many Canadian doctors agreed, saying they’d be glad to participate in physician-assisted suicide.

But a funny thing happened on the way to Canada’s brave new world of state-sponsored killing. Dozens of physicians who signed up, including many who actually provided lethal medications to patients, now want their names removed from the list. According to Canada’s National Post, in Ontario, one of the few provinces that actually tracks this kind of data, 24 physicians have been removed permanently from a voluntary referral list of those willing to assist people who want to end their lives. Another 30 have put their names on temporary hold. Not even the Canadian Medical Association can say how many are having second thoughts—but their decisions are reverberating through the system.

“We’re seeing individuals, or groups of physicians, who are participating and really feel like they’re alleviating pain, alleviating suffering,” says the CMA’s Jeff Blackmer. “And then we’re seeing doctors who go through one experience and it’s just overwhelming, it’s too difficult, and those are the ones who say, ‘take my name off the list. I can’t do any more.’”

That kind of reaction isn’t surprising, given the Hippocratic Oath every doctor takes, vowing to “do no harm” to patients. These doctors started out philosophically supportive of euthanasia … and then reality set in. The human conscience—and the law of God written on our hearts—are powerful things indeed.

But there are also the complications created by verbal ambiguities in the law. In Canada, euthanasia and assisted suicide are permitted for those with a “grievous and irremediable” condition and who face “enduring suffering,” but only if their death is deemed “reasonably foreseeable.”

According to Dr. James Downar, a critical- and palliative-care doctor with Toronto’s University Health Network, “grievous and irremediable” means “serious and incurable.” The problem, Downar says, is that the standard could apply to most chronic conditions. And when it comes to cancer, he says, “many people may have a remote chance of a cure, or disease stability. If it’s one, two or five per cent, is that ‘curable’?”

Meanwhile, as Vancouver Island family physician Jonathan Reggler says, that “reasonably foreseeable” standard “will not appear in any medical textbook.”

So some physicians in Canada fear running afoul of the Medical Aid in Dying law. Reggler notes that, “If the doctor doesn’t carry out the medically assisted death according to the law, that doctor is at risk of being prosecuted for murder.”

An analysis of the actual results of Canada’s law is also more than a little troubling. The commission overseeing Quebec’s euthanasia law, the first of its kind in the country, reported 262 euthanasia deaths in the law’s first nine months—almost three times the expected number. And of those, 21—almost 10%, were found to be outside the legal regulations.

Physicians are hoping that voluntary participation in euthanasia doesn’t become a duty to participate, though that has been suggested by some in the medical community. Thank God, so far, attempts have not been made to force the several Canadian hospitals not participating because of religious convictions to offer this so-called “service.”

We’ve spent a lot of time on BreakPoint and on our podcast denouncing assisted suicide, providing you with arguments and reasons to protect life, as well as clarifying the inevitable consequences of doctor-assisted death. And yet, “death with dignity” laws continue. It’s a hot topic in DC right now, in fact.

So please, educate yourself, mobilize your church, and warn your legislators..