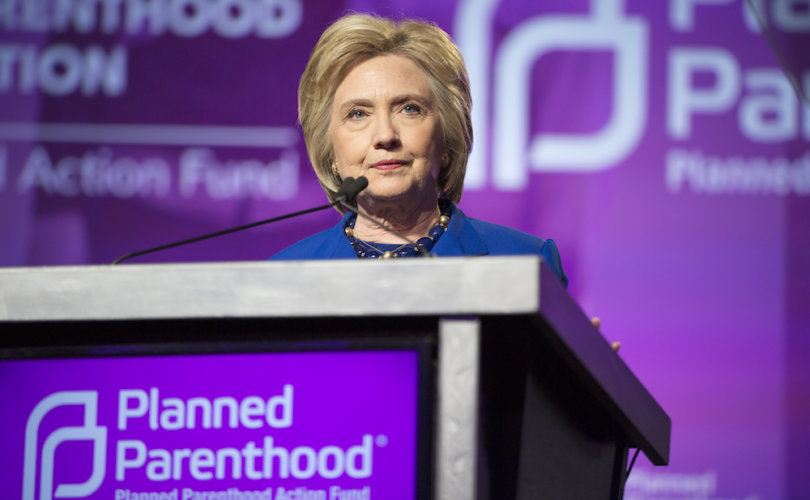 November 7, 2016 (BreakPoint) — In the third presidential debate last month, Hillary Clinton said women should be able to end the lives of their preborn babies right up until the very moment of birth, long after a child is viable outside the womb.

In a recent Marist poll reported by the Wall Street Journal, eighty percent of Americans and some sixty-percent of self-described pro-choicers oppose this extreme view. Instead, they support restricting abortion to the first trimester of pregnancy.

Just more evidence that the landscape is changing. Not only is Clinton’s extreme view on abortion unpopular—it’s outdated. A 2015 survey by the Public Religion Research Institute found that millennials are more likely than their parents to say that abortion ought to be legal only in certain stages and certain circumstances. According to another poll by Students for Life of America, just 17 percent of millennials agree with the Democratic presidential nominee that abortion should be legal right up until birth.

All of this led Ruth Graham to conclude in Slate that the pro-life movement is in the midst of a transition. But it’s not just in the sense that it’s getting younger. It’s also attracting the non-religious.

Not that long ago, being pro-life meant you were almost certainly a Catholic or evangelical. But now, the belief that killing unborn babies is wrong is transcending religious and even political boundaries.

Take Aimee Murphy, the 27-year-old founder of Pittsburgh’s Life Matters Journal. Aimee was raped by an ex-boyfriend who pressured her to get an abortion when she thought she was pregnant. That was when it clicked, Aimee says. “I could not use violence to get what I wanted in life. I realized that if I were to get an abortion, I would just be passing oppression on to a child.”

Her appeal, like that of a growing group of young pro-lifers who aren’t religious, is rooted in human rights, and the belief that our nation has committed an unspeakable atrocity in the name of convenience.

Kelsey Hazzard, founder of the group Secular Pro-Life, says the non-religious argument against abortion has the potential to bring people on board who would have never otherwise taken the message of life seriously.

And Destiny Herndon-De La Rosa, a Dallas resident who founded New Wave Feminists, sees protecting the unborn and ending abortion as a deeply feminist cause. She told Slate she doesn’t understand why so many fellow feminists treat fertility “like a disease,” as if abortion is the only way women can achieve their dreams. The culture of death tells women they must bear the consequences of pregnancy alone, and Herndon-De La Rosa calls that “a grave form of injustice.”

“We have to humanize the child,” she says “… this is a human being with their own bodily autonomy,” an argument that she says is “a completely feminist message,” but as we know has its roots in Christianity.

Of course, many of these secular pro-lifers hold views in other areas Christians would deeply disagree with. For example, Maria Oswalt, a senior at the University of Alabama who leads her school’s Students for Life club, say LGBT issues and sexual wholeness have little to do with protecting the unborn.

That’s wrong. If we teach anything here at the Colson Center, it’s that these issues are connected. One of the great lies of the sexual revolution is that the fulfillment of our desires is our greatest good. And abortion exists because babies—which come from sex—get in the way of those desires.

But at the same time, we should be thrilled and grateful to see the message of life taking hold beyond the church and conservative politics. Why? Because it’s true. The humanity of the unborn is increasingly undeniable, and the extreme abortion views Hillary Clinton represents are, in many ways, the past. The future belongs to the defenders of life, even if they don’t always share our faith or our politics.