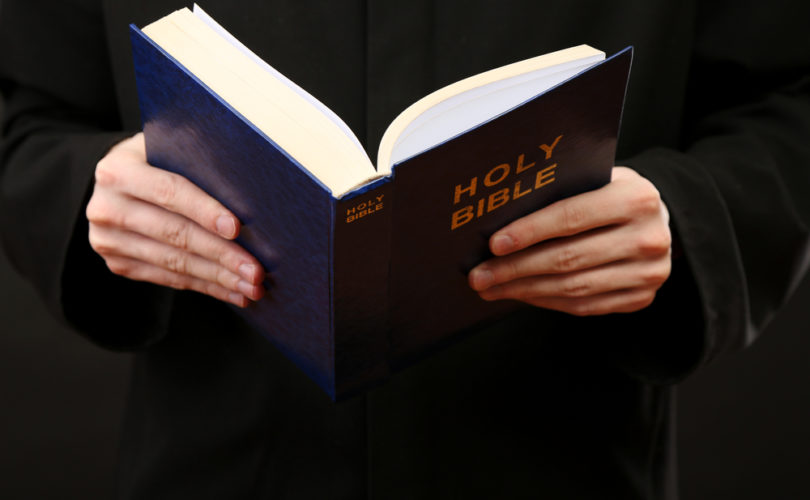 (LifeSiteNews) — Recent U.K. headlines over the designation of some Bible verses as “no longer appropriate” in the modern age signal another redrawing of the battle lines over what constitutes hate speech. This most recent case centers on a British Army veteran, John Dunn, telling two female homosexuals, “It says in the Bible that homosexuals will not inherit the kingdom of God.”

This is a paraphrase of Scripture, but the statement is essentially a fair representation of what is to be found in the Bible on the matter. As it says in the book of Leviticus, the homosexual act is an abomination. Priests who still adhere to the teachings of the Bible roundly condemn both the act and its glorification, seeing in this valorization of deliberate sin a sign of the end of civilization.

It is for this reason I would agree with the summary of the Crown Prosecution Service, which stated, “There are references in the bible which are simply no longer appropriate in modern society, and which would be deemed offensive if stated in public.” That is to say, our society and the people who direct it have chosen their path, and it is not the one suggested by Christianity.

The case against Dunn has been dropped, citing the lack of reply from the plaintiffs. This hesitancy is unusual, as hate speech in the U.K. is taken very seriously.

So, what is hate speech? The simplest explanation of the term is “speech which some people hate.” The speech which is hated here is that of God. The legal definition in the U.K. is much less straightforward. It includes dislike, unfriendliness, and resentment, and comes very close to the criminalization of disagreement.

There is no need for any hate, for a victim, nor for any evidence to prosecute someone for hate speech in the U.K. According to the Crown Prosecution Service, a hate crime is:

There is no legal definition of hostility so we use the everyday understanding of the word which includes ill-will, spite, contempt, prejudice, unfriendliness, antagonism, resentment and dislike. [Emphasis added.]

To this can be added the guidance of the Metropolitan Police Service of London:

Not all hate incidents will amount to criminal offences, but it is equally important that these are reported and recorded by the police.

Evidence of the hate element is not a requirement. You do not need to personally perceive the incident to be hate related. It would be enough if another person, a witness or even a police officer thought that the incident was hate related. [Emphasis added.]

This means in practice that you or anyone else can allege a case of hate speech on behalf of someone – or of some group – you may not even have met. It is a literal thought crime, since thoughts about it are the evidence base.

Disliking something, being unfriendly to someone – these are hate crimes. The Crown Prosecution Service, which determines who to take to court, proudly reports that they have prosecuted 10,000 cases of hate crime in 2021, with over 84 percent being found guilty.

A further feature of hate crime legislation is that where it is accepted that a hate crime has taken place, any sentence for an additional offence can and will be increased. The CPS claims that in 74 percent of 2021 the judges increased the sentences of defendants having found a hate crime element to their offending. This means that over seven thousand people received more severe sentences as a result of the application of a legal instrument which classifies taking offence on behalf of someone else as hatred. While the quoting of the Bible is not yet a crime, its classification as such is only a thought away.

So, is the Bible promoting a wave of hatred in the West? According to the National Catholic Register, there is indeed an epidemic of religious hatred in Europe, but it is not directed at people pursuing a lifestyle based on sexual preference. It has resulted in the murder and violent assault of Catholic priests in France, with a reported 70 percent rise in attacks on Christians in five major European states over 2019–2020.

In both reports above the cause is attributed to secular “tolerance.” This is perhaps the supreme virtue of the modern age. It is of course two faced, and its attitude is determined by what it sees.

READ: Did you know there’s a missing Bible verse in the Gospel of Matthew?

— Article continues below Petition —
URGENT: Say No to the UK introducing a “right” to abortion
Show Petition Text
10650 have signed the petition.
Let's get to 12500!
Thank you for signing this petition!
Add your signature:
Show Petition Text

If secular tolerance gazes upon those it favors, it can see no evil. It preaches endless indulgence of the sexual and gender identity movements, valorizing their life choices and minimizing by omission the inflexible hostility of the religion of Islam to their rainbow comrades. Secular tolerance celebrates anyone who wishes to gain advantage through the professionalization of grievance. It elevates offence-taking to a wise career move, and promotes the anti-morality of a wilfully post-Christian managerial elite.

Its benign and limitlessly forgiving countenance is one never seen by Christians. To them and to their beliefs, its intolerance is a reflex. It is one embedded in our political ideology, whether at State or individual level. In the words of the Observatory on Intolerance and Discrimination Against Christians in Europe:

Through our research, we identified an increasing intolerance and discrimination from mainly two sides. First, from the governmental side through legislation, or political discourse that undermines the freedoms of Christians and, secondly, from an individual side, through social exclusion and criminal acts against Christians. It was also uncovered that the main dynamic that causes the erosion and limitation of the freedoms of Christians is what was termed secular intolerance.

Our modern secular society is nominally dedicated to the freedom of the individual. This idea of liberty is one which reduces entirely to an idea of the liberation of the self and its desires. In a strange paradox, the more extreme this celebration of the self becomes, the more the law intrudes into private life to defend it – against the upset caused by disagreement.

This is the reason for the hatred of some speech. It is an issue which extends beyond the legal and illegal persecution of Christianity into the wider sphere of social media, as it centers on the prohibition of the other point of view. We are inured to being obliged to accept ideas which cannot survive an argument. This time the argument is not about plain speech, but the Word of God. There can be no argument that the modern world has taken offence at His Word. The question remains whether its pharisees wish to put Him on trial.