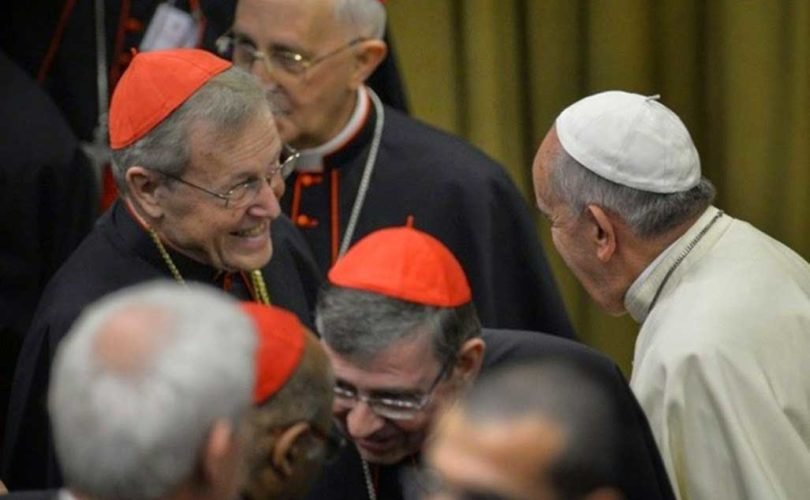 November 16, 2015 (CatholicCulture.org) — Sometime soon—we know not when—Pope Francis will issue a document concluding the work of the Synod on the Family. One question looms over all others: Will the Pope endorse the Kasper proposal?

Father Raymond de Souza predicts that he will. “He has steadily prepared the Church for just that,” he writes in the Catholic Herald. “It would be foolish to ignore the signs.”

Throughout the course of the October discussions, Pope Francis dropped hints of his interest in the Kasper proposal, and as the meeting concluded he issued what appeared to be an angry denunciation of bishops who were not open to new ideas. More telling, Father de Souza writes, is the fact that since the Synod ended, friends of the Pontiff have been predicting that he will give the Kasper proposal his stamp of approval. Eugenio Scalfari of La Repubblica claimed that the Pope had told him as much, and although the Vatican press office quickly reminded us that Scalfari is not reliable, it seems probable that the Holy Father said something to give the Italian journalist that impression.

Unlike Scalfari, Father Antonio Spadaro, the editor of Civilta Cattolica, is regarded as quite reliable. In fact the commentaries published in Civilta are reviewed by the Secretariat of State in advance of publication, so that they are perceived as accurate indications of “official” thinking at the Vatican. Father Spadaro has stopped just short of an outright declaration that the Pope will embrace the Kasper proposal, emphasizing a “new openness” to the question of pastoral care for divorced and remarried Catholics.

In his analysis, Father Spadaro compares the pastoral work of the Church with the functioning of a GPS system:

In an insightful response that appears in Chiesa, an American theologian, Father Robert Imbelli, remarks that, yes, a GPS recalibrates directions. “But it does not change the destination. Otherwise it would lead those depending on it astray.”

Father Imbelli goes on to note the irony in Father Spadaro’s imagery, because for Italians “GPS” are the initials of Giovanni Paolo Secondo— St. John Paul II, whose teaching in Familiaris Consortio was directly opposed to the intent of the Kasper proposal. The Synod’s final statement quotes Familiaris Consortio, and Pope Francis has cited it as well. But both the Synod document and the Pope’s statements have conspicuously omitted this passage:

However, the Church reaffirms her practice, which is based upon Sacred Scripture, of not admitting to Eucharistic communion divorced persons who have remarried. They are unable to be admitted thereto from the fact that their state and condition of life objectively contradict that union of love between Christ and the Church which is signified and effected by the Eucharist. Besides this, there is another special pastoral reason: if these people were admitted to the Eucharist, the faithful would be led into error and confusion regarding the Church's teaching about the indissolubility of marriage.

If Father de Souza’s unhappy prediction is accurate, and the Pope does open a path to Communion for Catholics who are divorced and remarried, informed observers believe that he will avoid a directcontradiction of his predecessor by adopting the “internal forum” solution suggested by the German-speaking bishops in their report to the Synod.

The “internal forum” ordinarily refers to the confessional, and the solution offered by the German bishops was for Catholics who are divorced and remarried to meet with their confessors, discuss the circumstances of their failed marriages and new unions, and, after doing appropriate penance, return to Communion. The details of this proposal are vague—perhaps, one is tempted to say, deliberately vague. Under what circumstances would a confessor be authorized to tell penitent divorced/remarried Catholics that they might again receive the Eucharist? Would the decision be left entirely to the individual priest’s discretion?

There are other practical problems with the proposal. The “internal forum” solution requires a meeting with a confessor, and anyone familiar with the normal life of the Church today knows that most Catholics rarely, if ever, find their way into a confessional. Yet at the same time, if it is theoretically possible that a divorced/remarried Catholic may have obtained a confessor’s permission to receive the Eucharist, few Catholic priests would dare to question such a person if he presented himself for Communion. So in practice, if the “internal forum” proposal is adopted, a divorced/remarried Catholic may be tempted to receive Communion—at risk to his soul—without taking any steps down a “penitential path,” because no one will question him.

In this way, a nightmare scenario could easily develop. The divorced/remarried individual pretends that he has consulted with a confessor. His pastor, probably knowing that this is unlikely, nevertheless pretends that the canonical requirements have been satisfied. Everyone involved is living a lie!

These difficulties arise because marriage is not just one more field in which the faithful may or may not live up to their moral obligations. Marriage is a public act. An individual either is, or is not, married. In an annulment case, canon lawyer Ed Peters reminds us, “the tribunal asks a single fundamental question: are the two people before it, who appear to be married, really married?” This is a question of fact, and from the answer to that question there flow some inescapable conclusions. During the Synod there was a great deal of talk about showing compassion for Catholics in irregular marriage, and few people would disagree that the Church should—as Pope Benedict XVI emphasized so strongly—find ways to help people in that situation. But when the question arises as to whether those people are validly married, Peters insists, “Compassion has nothing to do with it.” This is a question of fact.

Marriage tribunals are set up to test facts, hearing testimony (if at all possible) from both parties. The “internal forum” proposal would encourage a priest to make a judgment after hearing just one side of what is invariably a complicated story.

But could a pastor, theoretically, hear both sides of the story? Could there be some sort of “internal forum,” similar to the confessional, but different in that both partners would be involved? Here we encounter another complication. In most divorce cases, one partner does not want to be involved. Rick Fitzgibbons, a psychiatrist who heads the Institute for Marital Healing, has an important perspective on the matter:

Over the past forty years, I have never worked with a Catholic marriage in which both spouses wanted a divorce. In the majority of marriages under stress, one spouse remains happy with the marriage, believes the conflicts can be resolved and is loyal to the sacramental bond.

But wait: If one partner wants to work out the problems in the marriage rather than abandoning the marriage, shouldn’t the Church show compassion for that spouse? Shouldn’t pastoral energies be devoted to saving marriages, rather than picking up the pieces afterward? Dr. Fitzgibbons cites the disturbing results of a national survey of divorced men and women, conducted by researchers at the University of Texas, which found “the honest response that only one in three divorced spouses claimed that both they and their ex-spouses worked hard enough to try to save their marriage.” Pastors and confessors might work wonders by using the “internal forum” solution prior to marital breakdowns, helping dueling spouses recognize how they are endangering their marriages, their lives, and their souls—before they abandon a sacred commitment.

And haven’t we neglected another important consideration? We have been speaking about the spouses, the partners involved in a marriage (or divorce). But a marriage creates a family, and a family includes children; they too are interested parties in any marriage case. In an excellent article in America magazine (!), several authors—all survivor-victims of the divorce wars—write that the “internal forum” proposal “would dismiss the needs of children in order to satisfy the desires of adults.”

The authors of the America essay note that some public statements by Pope Francis “seem to suggest that children are harmed by the current practice of excluding their divorced and remarried parents from receiving Communion.” They continue, in plain language: “This notion is mistaken.”

This article was originally published on Catholic Culture and is re-published with permission.

Mr. Lawler has been a Catholic news editor and journalist for more than 30 years. He has also worked in politics and has written eight books, including the best-selling The Faithful Departed: The Collapse of Boston's Catholic Culture. His essays, reviews, and columns have appeared in over 100 magazines and newspapers. He has been Director of Studies for the Heritage Foundation, a member of two presidential inaugural committees, and a candidate for the US Senate. He has also acted as editor of Crisis Magazine, editor of The Pilot, editor of Catholic World Report, and founder and editor of Catholic World News (CWNews.com)—the first online Catholic news service.