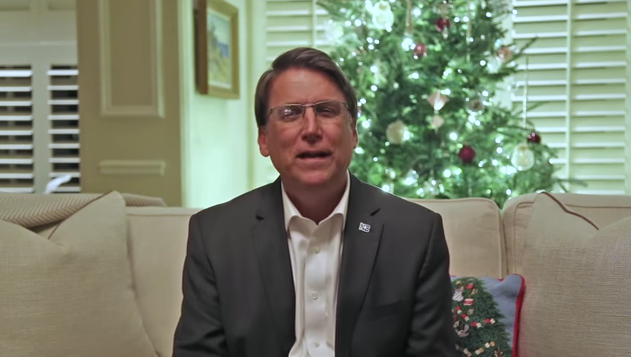 The immediate past governor of North Carolina, Gov. Pat McCrory, was chased by a chanting mob down a blind alley in Washington, DC on Saturday.

Lines are being crossed, and I have been holding my tongue. Yesterday, however, one of the growing series of spectacles caught my attention like no other. It was a video article posted on the Charlotte Observer’s website showing the immediate past governor of North Carolina chased by a chanting mob down a blind alley in Washington, DC on Saturday.

The 3:35 video begins with former Gov. Pat McCrory bidding goodbye to TV commentator Lou Dobbs on a city sidewalk. The mob approaches him and begins chanting and shouting, “Shame on you… You’re a bigot and an a**hole… You’re not a man, you’re a coward.”

Gov. McCrory retreats calmly in the company of three women and Mr. Dobbs down an alley to a building entrance that is locked. As they wait to be admitted, the mob continues to chant, “Shame.” Just after the one minute mark, the ringleader says, “We’ve got you now.”

Two more anxious minutes pass until uniformed Secret Service officers arrive and usher the mob away. The mob turns on them, shouting, “Shame on the cops, too.”

Ubiquitous leftist rioters are fond of shouting “Shame,” but invariably incapable of it.

Ditto for the Charlotte Observer. The lede of its article is the breezy observation that “[l]ife following public service isn’t always easy when you’re known as the governor who signed [HB2].” Content with this revolting dose of schadenfreude, the one-time news organization credits Udai Basavaraj for the video, as if he’s a news photographer, and links to his Facebook account. But reports nothing about him.

Not for the first time, I have done the Observer’s work for it…

Basavaraj hails from Greensboro. His GoFundMe pages beg $1,000 to attend Socialism 2016 in Chicago last July and two grand for buses to take members of the International Socialist Organization to Washington to protest President Trump’s inauguration.

In September, according to student newspaper The Carolinian, Basavaraj co-led an ISO informational meeting at UNCG where “socialists, Marxists, anarchists and those interested in learning about socialism gathered.” (The story did not note whether Basavaraj summarized the benefits of socialism for, say, Venezuela for the young people in attendance.)

Basavaraj’s cohort for the meeting was Juan Miranda, a socialist organizer, UNCG graduate assistant and fellow South Meck High alum, according to his Facebook page. Basavaraj’s Facebook post tagged Miranda as a participant in the mob that pinned McCrory against a building. One also wonders if the mob fell upon the former governor by coincidence or if they stalked him.

If Gov. McCrory were a former official of the District of Columbia, this incident might have been a crime punishable by five years in prison. D.C. Code § 22-851 (anyone who “by any threatening letter or communication, intimidates, . . . or retaliates against, or attempts to intimidate . . . or retaliate against” a current or former official “on account of the performance of [his or her] duties.”)

So, should it be in North Carolina. This is dangerous. Jim Hunt, Bev Purdue and other governors never faced riotous mobs in their post-service, private lives, without personal security. If they had, the Observer of that day wouldn’t have laughed it off, which is contemptible.

When the General Assembly returns to Raleigh this week, I will introduce legislation to follow the lead of the District of Columbia and make it a crime to threaten, intimidate, or retaliate against a present or former North Carolina official in the course of, or on account of, the performance of his or her duties.

And I will also urge my colleagues to take other appropriate steps to guarantee the personal safety of Gov. McCrory by all necessary means.

Because lines are being crossed.