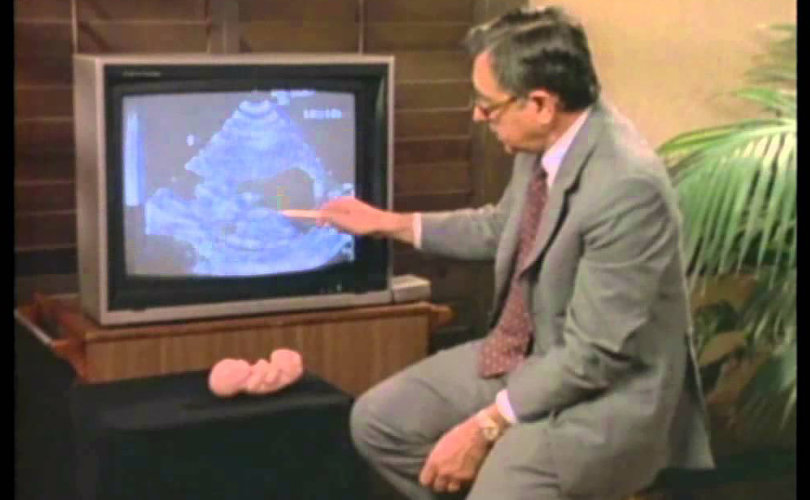 Dr. Bernard Nathanson showing an ultrasound of an abortion

Author of What If We’ve Been Wrong? Keeping my promise to America’s “Abortion King” and president of Hosea Initiative

March 28, 2017 (LifeSiteNews) – The word “precedent” has been mentioned numerous times during Judge Neil Gorsuch’s confirmation hearing, but it was Senator Dianne Feinstein’s day 2 inquiries which triggered me to contemplate and marvel at what Sir William Blackstone, one of the most widely read contemporaries of the drafters of the Declaration of Independence and framers of the Constitution, called the Laws of Nature and Nature’s God.

Blackstone affirmed the parallel equality of the “laws of nature” (the moral law governing nature and inscribed on the heart of man) to the “law of God” (the revelation of the same law in Scripture). Senator Feinstein, though, was pressing Judge Gorsuch to agree that the Roe v Wade decision of 1973 which decriminalized killing unborn children was not only a precedent, but something now called a “super-­‐precedent.” She insinuated it was solidly supreme.

As if to carve in stone the infallibility of the U.S. Supreme Court decisions by tacking on superlatives—no matter how incorrect and unjust the SCOTUS decision might be—Feinstein and other dissenters of the Laws of Nature and Nature’s God aimed for supremacy over God’s law. In the end, they will always lose no matter how many “super-­‐super-­‐super’s” they put before the word “precedent” because God has already spoken and given us His Supreme Law. Here it is: the right to life is inalienable, unalienable, absolute, immutable, unassailable, indisputable and undeniable.

Supreme Court Justices, Congresswomen, nor a mob of misguided feminists who march on Washington give us the right to live. God does. In fact, God keeps stacking the deck in His favor making His “Super-­‐Super-­‐Super-­‐Precedent” on this perceived inconsequential matter of human life known through the realm of science and the science even converted the heart and mind of America’s “Abortion King,” Dr. Bernard Nathanson. He was the former atheist who cofounded NARAL [Pro-­‐Choice America]. The science opened his eyes to the Supreme Law written on his heart—that the unborn child is his second patient and that abortion is cold-­‐blooded murder.

In fact, when I interviewed 83-­year-old Dr. Nathanson in 2009, he told me, ““Terry, the bombshell was real-­time ultrasound. It made everything come alive. It opened a window into the womb.” In his book called The Abortion Papers, Dr. Nathanson reflected on the tactics he and others used to obtain abortion victory. He wrote, “A political victory achieved by such odious tactics is at best an unstable tyranny spawned by an unscrupulous and unprincipled minority. At the very least this disclosure of those odious tactics should compel those who are uneasy with permissive abortion to re-­‐examine the issue…”

If still alive, Dr. Nathanson would be glad that Senator Feinstein is asking the next Supreme Court Justice to revisit Roe v Wade’s permanence—or lack thereof.

Dr. Nathanson grew to appreciate that neither our legislators nor our judges can alter the value system for which America must operate. It was settled at the birth of our nation when it was written in the Declaration of Independence. It’s the value system which recognizes the self-­‐ evident truth that “all men are created equal, that they are endowed by their Creator with certain unalienable Rights, that among these are Life, Liberty and the pursuit of Happiness.”

Whether Senator Feinstein likes it or not, Judge Gorsuch is bound by the Laws of Nature and Nature’s God. She, nor any other senator, can undo it because those laws are written on that man’s heart. Judge Gorsuch also knows they are written in America’s founding documents and he cannot alter that either. The intentional killing of innocent life—no matter how the procedure is linguistically sugar-­‐coated—does not abide by our founding principles. Period.

When Judge Gorsuch and future nominees are confirmed and the abortion cases are revisited, these Justices will have what the Supreme Court did not have in the early ‘70s: 1) the science of real-­time ultrasound showing what it looks like to rip a baby into pieces, 2) they will have the super-­‐majority on the Supreme Court, 3) they will have what the founder of NARAL left behind—his testimony of intentionally deceiving American courts, legislatures and women, and 4) the Court will have Dr. Nathanson’s 1975 resignation letter to NARAL in which he writes—

“The judgments of the Supreme Court were never meant to be infallible or eternal. And what if we’ve been wrong—if the Court should soon reverse itself on the abortion issue in the light of changing times and/or new scientific evidence? What an incalculable injustice will have been perpetrated. What an immeasurable irretrievable loss will have been suffered.

The annual dues of NARAL are ten dollars and the hubris of certainty. Regretfully, I can no longer meet those dues.”

NARAL’s founder understood the fallibility of man’s perception of precedence and how it can never supersede the Laws of Nature and Nature’s God. The truth Dr. Nathanson and our Founders left behind will trigger the restoration of righteous precedent, justice in the courts and an unstoppable catalyst to heal our land.