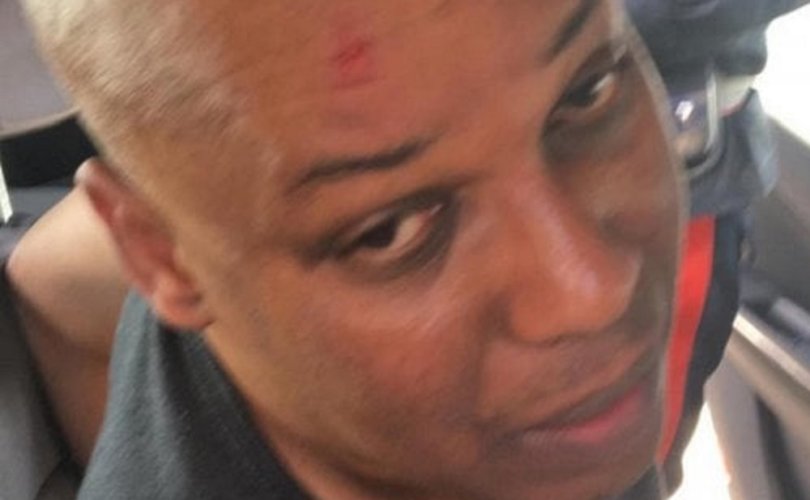 Ousseynou Sy, a Senegalese immigrant who tried to set 50 Italian schoolchildren on fire near Milan.La Repubblica

According to the European media, the bus driver, an “Italian citizen” who migrated from Senegal several years ago, hijacked his bus-full of middle school children, forced the three school chaperones to handcuff the children with plastic ties, then took off on the highway, ramming into cars along the way. When he was stopped by a police barricade, he set fire to the bus which he had previously doused with fuel. Luckily the police were able to break the bus windows and free the students. No one was seriously injured but several children suffered shock, bruises and smoke inhalation. The bus driver, Ousseynou Sy, told the panicked children that what he was doing was revenge for his own three children who had died while crossing the Mediterranean in an attempt to get to Italy. He told police that he was retaliating for the thousands of migrants who had drowned in the sea crossing in recent years.

I first became aware of the bus hijacking while browsing the Jihad Watch website around 2 p.m. on the day of the incident. Robert Spencer's piece contained a long excerpt from a Telegraph article published hours earlier. I wondered when the American media would pick up the story.

At 4:30 p.m. I checked Google News. There were plenty of articles about the New Zealand mosque massacre, but nothing about the near-massacre in Italy. I checked again at 6 p.m. Still nothing, but there were 6 headline stories about the New Zealand shooting with a “click for more stories” link which brought up dozens more stories about the mosque attack. I thought to myself that Google News was a bit slow on the uptake. I assumed that they were trying to decide how to minimize the story.

At around 7:30 p.m. Fox News carried a brief account of the hijacked children and the blazing bus. I tried Google News again. There was nothing about Italy, but one could have spent most of the evening reading all the stories about New Zealand. In addition, there was a Snopes piece entitled, “Did 'Muslim militants' kill 120 Christians in Nigeria in February/March, 2019?” To put the New Zealand attack in perspective, a number of Christian and conservative sites had run stories about the almost daily attacks on Christians by Muslims in Nigeria. The Snopes piece was an obvious attempt to undercut that narrative. It emphasized that the Muslim-Christian troubles in Nigeria should be understood as a range war — conflicts and clashes between farmers and cow herders over land. As Snopes presented it, the Nigerian massacres were just like the stories of farmers and cowboys fighting over grazing lands in the old West. And shame on you for thinking it has anything to do with Islam.

I checked Google News again at midnight and at various times the next day, and found nothing about a bus hijacking in Italy; but, again, there were numerous stories, new and old, about the New Zealand tragedy. Perhaps in a few days Snopes will do a “fact check” showing that the Italian bus incident was not presented in the correct context.

Those of a certain age will remember a story from 1976 about a school bus full of children that went missing for 36 hours near the town of Chowchilla, California. Along with their driver, the children had been kidnapped by three men who after an 11 hour drive, hid the bus and transferred the children to two vans which had been hidden underground in a rock quarry. Happily, the children, aided by their driver, managed to escape.

Another school bus full of children went missing two days ago in Italy. Only it didn't go missing from sight. It went missing from the news. Not entirely, of course, but for such a big story the coverage seemed minimal. That's strange. It's a great big look-at-me story full of drama and human interest. Most parents, especially those with school-aged children who take buses to school would want to know about a story like this. Grandparents would also want to know. Wouldn't you? Don't the people at Google News have children? Don't they care? Or is something else at work? The Chowchilla school bus story was nationwide news for several days, but that was in a time before the news became highly politicized.

Google News didn't run the story because it undercut the narratives that Google had been pushing for days. One of those narratives is about widespread anti-Muslim bigotry, or “Islamophobia” for short. But the story out of Italy didn't fit that narrative. The vengeful bus driver wasn't bigoted against Muslims. In fact, seeing that he comes from Senegal, a country that is 92 percent Muslim, he most probably is a Muslim.

Another narrative that Google favors is that opposition to immigration creates a climate that leads to violence. After all, the New Zealand shooter had pronounced anti-immigrant views. But the Italian bus driver was very much the opposite. He was pro-immigration — so much so that he was willing to kill 50 children in order to protest Italy's new restrictive policy on immigration.

If you don't think that Google is biased and is deliberately trying to manage what we are allowed to know, imagine that the children on the bus were Muslim, and their driver was a white nationalist anti-immigrant. Would Google have given the story the silent treatment?

The other reason that Google and other media don't want to dwell on the story is that the bus driver's views on immigration are uncomfortably close to their own, and it wouldn't do for people to think too much about that fact. Like Ousseynou Sy, the media elites tend to think that borders should be open and that all migrants deserve to be safely escorted across the sea (the kidnapper's views on immigration also happen to closely coincide with those of Pope Francis, a majority of European bishops, and the USCCB). Sy railed against Interior Minister Matteo Salvini's immigration policies, but as Ned May observes in Gates of Vienna, “[he should] have realized that his actions were an affirmation of Mr. Salvini's argument against allowing third-world immigrants into Italy.”

Of course, the people who write the news do realize that. They are smart enough to know that Mr. Sy's behavior is not a good advertisement for their own open-borders position. And so, they have given him short shrift. The story came and went in the blink of an eye. The New York Times claims it carries “All the news that's fit to print,” but Google News along with numerous other news outlets has a different agenda — something along the line of “All the news that fits our narrative.”

It's bad enough that Google won't cover stories that challenge its view of the world. What's worse is that it's been trying to silence those who will. As I mentioned earlier in this piece, I came across the bus hijack story in Robert Spencer's Jihad Watch. For a long time, Spencer has complained that Google's search engine division has been targeting Jihad Watch by adjusting its algorithms in order to make it difficult to find his site. Other media companies and financial giants — Facebook, Patreon, MasterCard and Visa — have also attempted to silence Spencer in various and sundry ways. Spencer fears that in the wake of the New Zealand massacre, leftist and Islamic groups will soon succeed in their attempts “to silence all criticism of jihad terror and Sharia oppression of women and others.” This won't happen by means of legislation, he says, but through “a complete deplatforming.” “We will be able to speak,” says Spencer, “but no one will be able to hear us, as we won't be allowed on Facebook, Twitter, YouTube, and the rest.”

Does it really matter that much if Spencer's site is taken down? Aren't there plenty of other sources to bring us the needed information? The answers are, “yes, it really does matter,” and “no, there aren't plenty of other sources.” Moreover, those alternative sources that do exist can also be charged with “Islamophobia,” and quickly find themselves without a platform and without funding.

You're reading about the aborted bus massacre here because I first read it about it on Spencer's site. It's true that I would most likely have come across the story even if Jihad Watch were no longer in business. It was, after all, a sensational story complete with a wild bus chase, brave students, heroic police, and photos of the bus engulfed in flames and children reuniting with loved ones.

But how about all the smaller stories that, taken together, give us a picture of how cultural jihad and violent jihad are changing the face of the globe?

Had there been no Jihad Watch, I would have missed many of these. I don't subscribe to dozens of international newspapers, and I don't have far-flung correspondents who will alert me of the latest jihad outrages in France, Germany, India, Nigeria and elsewhere.

Here's a small sampling of stories I've read because of links from Jihad Watch that I might have otherwise missed over the last 10 days:

Well, you get the picture. Jihad is now a normal event in the Western world, and the Islamization of Europe is well underway. But, if the anti-Islamophobia zealots have their way, don't expect to have that clear picture for much longer. They want you to see only what they want you to see. And they want you to look at it only through the rose-colored lenses that they provide.

This article originally appeared in the March 23, 2019 edition of Catholic World Report. It is published here with permission from the Turning Point Project.