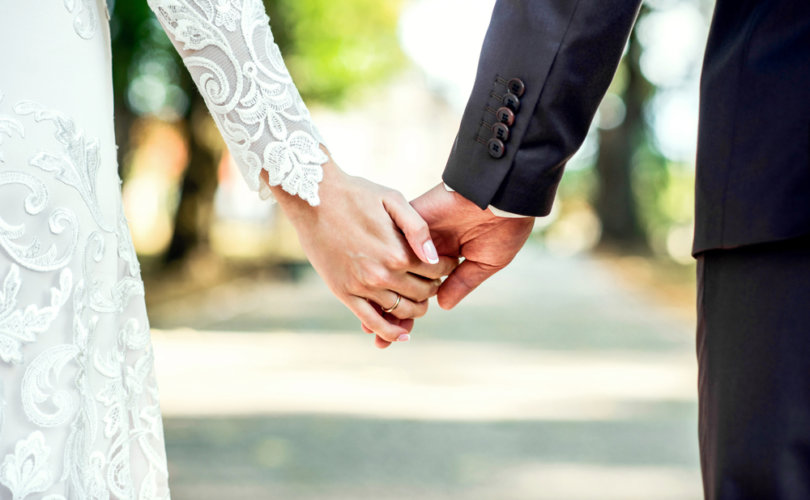 April 25, 2016 (Catholic Culture) — If you can trace your family tree back far enough, you'll probably encounter people who had no formal education, owned no books, perhaps couldn't read and write. But your uneducated ancestors knew what “marriage” meant– which is more than you can say for the typical Ivy League professor today. Your “benighted” ancestors would be both absolutely astonished that the literati of the early 21st century cannot figure out what was so obvious to them, centuries ago, and utterly appalled by the bogus unions that our contemporaries accept as marriages.

(By the way, I am not just thinking only of same-sex unions. I also have in mind the “open” marriages and the deliberately barren unions, the Hollywood-style serial marriages, the Kardashian couplings.)

The point is not that your ancestors would disagree with today's opinion leaders about the definition of marriage. No; the point is that your ancestors recognized an institution– the lifelong union of a man and a woman– which the fashionable elite no longer recognizes today. You could call that venerable insitution by a different name, but you would not change its nature. Nor can you change the nature of a shack-up, or a sodomite union, or an adulterous affair,  by calling it a “marriage.” You can call a square a “circle,” if you like, but that won't make it round. It will only make you look foolish– as our generation must look foolish to our saner ancestors.

And now the same sophomoric educators and politicians who redefined marriage are working to redefine “man” and “woman” as well. Just imagine the puzzlement of our ancestors, learning that although we can identify the sex of a fruitfly by examining its DNA, we say that we cannot identify the gender of an adult human by looking at his body! This is willful ignorance, of course. We know whether someone is a man or a woman, but we are asked to pretend that we don't know, until he or she has informed us, and if he says he is “she,” or vice versa, we are expected to accept that nonsense as fact.

Notice that this deliberate stupidity applies only to matters involving sexuality. If I say that a I am very tall, or very young, you will laugh at me, and rightly so. I am what I am: a man of (slightly less than) average height and (somewhat more than) middle age. I'd like to be taller; I'd like to be younger. But wishing won't make it so. You know that; I know that; our illiterate ancestors knew that. But on questions of marriage, sex, and gender, those ignorant ancestors knew more than we know now.