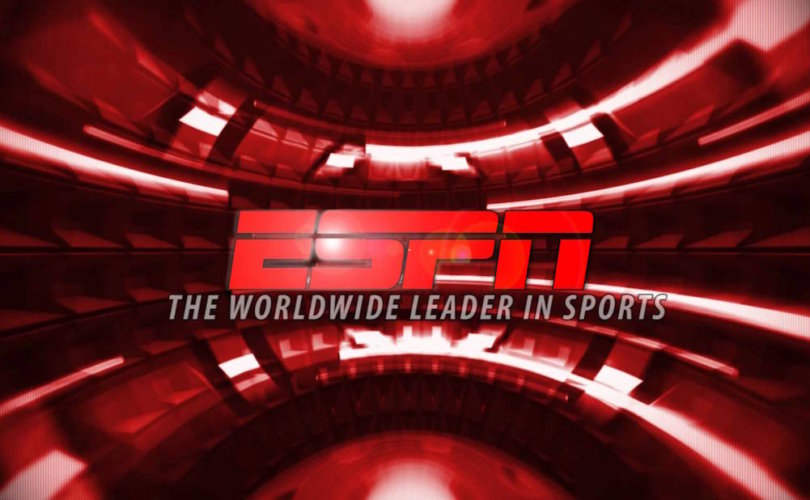 August 25, 2016 (LifeSiteNews) — A significant portion of my career was spent working as a sports reporter and editor. And so I’ve seen a lot through the years behind the scenes — some good and some bad — but ESPN has taken its reputation and that of responsible journalism to a new locker-room low with its decision to allow a nude, pornographic picture to be displayed on its website.

We’re not talking someone’s personal blog here that comes up on the eighth page of a Google search. ESPN is the largest disseminator of sports content in the world across multiple platforms. Millions upon millions of men, women, and children view the site every day.

Responsible parents should just shudder to think of all the impressionable young minds that will be subjected to naked athletes’ bodies now and in the future. To its credit, the network acknowledged that the Body Issue is a significant revenue producer. So as far as ESPN is concerned, the innocence of souls is obviously not as important as ratings or setting a societal standard.

For eight years now, ESPN The Magazine has published its annual Body Issue to show the masses what a fit body looks like. Surprise, surprise, these athletes have bulging muscles, tight abs, minimal body fat, and they are toned to the max.

ESPN put UFC champion Conor McGregor in the top position on the website on July 5 with his backside fully exposed and the rest of the body left to the imagination. Unfortunately, I saw the photo (didn’t click on the video, though) and wasn’t impressed. Lots of other viewers apparently weren’t enthused or amused, either, and expressed their displeasure to the so-called “worldwide leader” in sports programming. Honestly, I’m not sure what grossed me out more — the view from the rear or the tats desecrating his body.

More than a few people are wondering what ESPN is trying to prove by doing this. Is it supposed to motivate the couch potato or the weekend warrior to get in better shape? Are we supposed to worship these sculpted specimens and modern-day versions of Greek-like gods and goddesses? Appreciate the artistic quality of the photos? Or is it simply titillation for the eyes — sports pornography, if you will?

ESPN promotes the annual egregious display in its magazine as a celebration of the body. Celebration? How about winning the World Series or the Super Bowl or an Olympic gold medal? Those achievements seem more worthy of celebrating than a buffed naked body. It seems to me that when we view the body as an object of worship, we call that vainglory — or at least some of us from a more modest era were taught to believe that.

Some will argue that the photo and videos are artistic expression. I’m guessing most sports fans prefer their favorite athletes to show artistry on the field with a monster home run or a beautiful one-handed touchdown catch or a graceful dismount from the balance beam.

There are enough temptations in the webosphere these days that could suck our children and young adults into an underworld of immorality. We’d like to think that sports are still sort of a safe haven for young, impressionable viewers.

Of course, it would be naïve to think that athletes don’t have the same problems as everyone else in society (drug abuse, spousal abuse, immorality, DUI, you name it). We read it and weep, and we tell our kids that sports stars are real people just like us who have gifts and talents from God but also commit sins.

When you get down to it, I wonder if these photos on ESPN’s website will further legitimize in the public consciousness that it’s OK to objectify the body and, taking that a step further, lead to more cases of molestation, rape, incest, abortion, pornography, domestic violence, infidelity, and divorce.

I remember not so long ago that as editors and writers we were instructed not to print or broadcast any immodest images and delete or bleep vulgarity. But according to ESPN, those days are over.

“The strategic importance of the Body Issue likely assures that it will continue to produce both revenue and discussion about changing social mores,” ESPN public opinion editor Jim Brady wrote. “And given the audience demographics, you can count on seeing more, not less.”

That’s not good to hear. ESPN and its parent company, Disney, seem to believe part of their mission is to champion social issues such as transgenderism, gay “marriage,” and secularism. If you listen to ESPN Radio, watch its various networks, or read stories on its website, almost certainly you’ll find opinions that undermine traditional morality. Former ESPN broadcaster and major league pitcher Curt Schilling found that out when he was let go for expressing his conservative values.

Here’s what ESPN had to say in its defense after posting the scandalous body photo on its website:

The younger generation of consumers — which, like all media companies, ESPN is eager to attract — doesn’t have the same hang-ups about nudity, profanity and other long-held no-no’s that older generations do. That’s not a value judgment on any generation, it’s just a fact. The explosion of the internet and social media has obliterated the barriers that once largely kept profanity and nudity away from the general consumer.

“When the media served as gatekeeper, general rules about nudity and profanity were easier to apply. But in today’s world, the media controls only a portion of what’s published. Just as often, media sites sit downstream and sift through what is published and try to help the news consumer make sense of it. As a result, younger consumers are exposed to far more nudity and profanity than older generations were at their ages, and, to a large extent, are immune to it.

That’s not good to hear. It confirms that ESPN is a willing participant in the continuing devaluation of morality. Sad to say that this decision takes ESPN to a new low of trashiness, but we’ll watch because we love sports and pray for a change of heart.