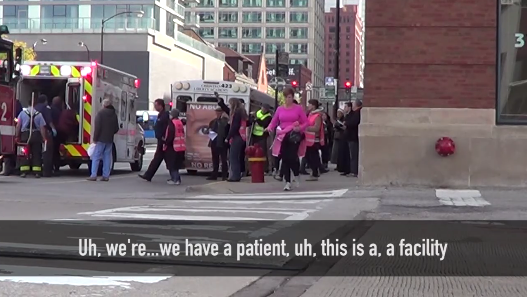 October 13, 2016 (ProLifeAction) — Two days after an ambulance showed up at the Family Planning Associates (FPA) abortion facility in downtown Chicago on October 11, 2014 — two years ago this past Tuesday — the Pro-Life Action League submitted a Freedom of Information Act request to obtain the audio of the 911 call that requested the ambulance.

Although the Pro-Life Action League and other pro-life organizations routinely submit FOIA requests for 911 calls made to abortion clinics and have no problems obtaining them, the City of Chicago denied our request.

Our attorneys at the Thomas More Society (TMS) appealed our denial to the Public Access Counselor of the Office of the Illinois Attorney General, which eventually determined there was “no clear and convincing evidence” for denying the release of the 911 calls. Still, the City of Chicago refused to comply with the Public Access Counselor’s judgment, which the City maintained was “non-binding.”

That meant our only remaining recourse was to sue [PDF], which we did on May 19. And realizing that they don’t have a leg to stand on, the City’s lawyers finally released the audio of that chilling 911 call, which we are making public for the first time in the video above.

Legalized abortion is abhorrent first and foremost because it sanctions the killing of over a million innocent children every year.  And it’s also abhorrent because its supporters have convinced large swaths of the American people that simply because it’s legal, it is ipso facto safe — a point that Justice Ruth Bader Ginsburg went out of her way to make in her concurring opinion on the Whole Woman’s Health v. Hellerstedt decision handed down by the Supreme Court this past summer, despite the fact that data related to abortion complications is egregiously inadequate.

Also of note from the majority’s opinion in Whole Woman’s was this section in which Justice Stephen Breyer, et al., claimed that Texas’ restrictions would not have prevented another Kermit Gosnell:

Gosnell’s behavior was terribly wrong. But there is no reason to believe that an extra layer of regulation would have affected that behavior. Determined wrongdoers, already ignoring existing statutes and safety measures, are unlikely to be convinced to adopt safe practices by a new overlay of regulations.  Regardless, Gosnell’s deplorable crimes could escape detection only because his facility went uninspected for more than 15 years. Pre-existing Texas law already contained numerous detailed regulations covering abortion facilities, including a requirement that facilities be inspected at least annually [emphasis added].

In light of this, consider that Chicago’s FPA has been in operation since 1988 as an unlicensed abortion facility — which, incredibly, is allowed under Illinois law — and has therefore never been inspected by the Illinois Department of Public Health in its 28 years of existence.

Is it any wonder that it’s proven to be unsafe?