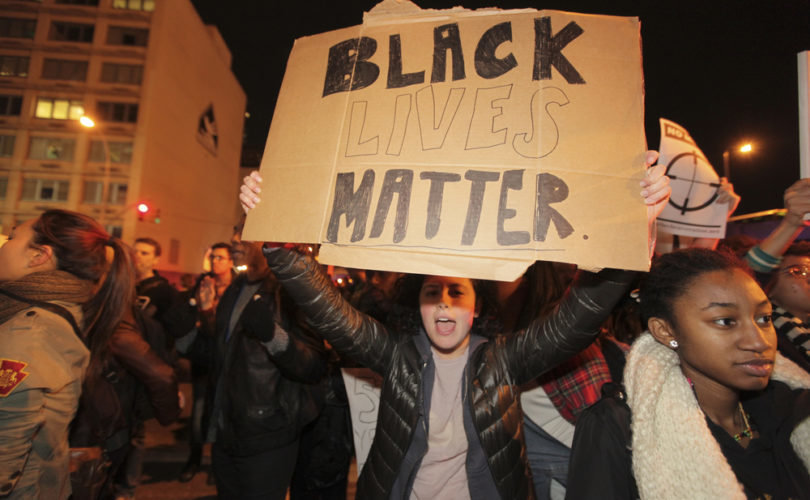 NEW YORK CITY - NOVEMBER 25 2014: activists took to the streets of New York City for the second day protesting the Ferguson grand jury's failure to indict Darren Wilson in the death of Michael BrownShutterstock

Without getting into the politics of the Ferguson police shooting case, the Justice Department has unveiled a disturbing e-mail circulated among Ferguson city officials linking black abortions to a reduction in crime.

The DOJ wrote this about the stereotype of black abortions reducing crime:

Our investigation has revealed that these disparities occur, at least in part, because of unlawful bias against and stereotypes about African Americans. We have found substantial evidence of racial bias among police and court staff in Ferguson. For example, we discovered emails circulated by police supervisors and court staff that stereotype racial minorities as criminals, including one email that joked about an abortion by an African-American woman being a means of crime control

A May 2011 email stated: “An African – American woman in New Orleans was admitted into the hospital for a pregnancy termination. Two weeks later she received a check for $5,000. She phoned the hospital to ask who it was from.The hospital said, ‘Crimestoppers,’

The idea that Black abortions contribute to a reduction of crime dates all the way back to eugenics of which advocates like Margaret Sanger, the founder of Planned Parenthood, was a part of.

In fact, abortion is the number one killer of the black community prompting pro-lifers to challenge the Ferguson #BlackLivesMatter hashtag because Black leaders were not protesting abortion.

A tweet sent by Milwaukee Sheriff David Clarke about the Ferguson protests went viral after he joined in the criticism of the black communicates’ failure to protest abortion. It read, “If only these faux protesters were asked by media about all the black on black killing or black babies aborted in US every year.”

In addition, recent ideas linking African American abortions to crime reduction have been spread through abortion radicals as well. Case in point is a blog I recently published about ObamaCare architect, Jonathan Gruber.

In a 1999 paper published by the American Journal of Public Health Phillip B. Levine, Douglas Staigei; (both co-authors with Gruber on his paper) along with Thomas J. Kane and David J. Zimnmerman, entitled, Roe v Wade and American Fertility, the group points out that when abortions are made legal, fertility rates drop, with a reduction in births of teens and non-White women being the largest.

“Estimates show that births to non-White women in repeal states (vs states with no law change) fell by 12% just following repeal, more than 3 times the effect on White women’s fertility,” that paper states.

In Gruber’s paper, Abortion and Selection, Gruber repeats the oft-heard eugenics reason for abortion: that it reduces welfare.

Gruber and his fellow authors sandwiched their analysis this way, “We found consistent evidence that changes in cohort composition that occurred in the 1970s that can be attributed to greater abortion access led to improved cohort outcomes, particularly in the form of higher rates of college graduation, lower rates of single motherhood, and lower rates of welfare receipt.”

Gruber and the other authors also conclude among other things that there is a link between increased abortion access and a reduction of crime.

That theory was perpetuated by John J. Donahue and Steven D. Levitt in a paper they wrote entitled, “The impact of legalized abortion on crime.”

According to Life News, in Harvard University’s Quarterly Journal of Economics, Donahue and Levitt concluded that “Legalized abortion contributed significantly to recent crime reductions. … Legalized abortion appears to account for as much as 50 percent of the recent drop in crime.” The authors noted, “Crime began to fall roughly 18 years after abortion legalization,” and that the social benefit of this decrease in crime is about $30 billion annually.

Donohue and Levitt wrote that, since 1991 ― 18 years after Roe v. Wade legalized abortion ― murder rates have fallen faster than at any time since the end of Prohibition in 1933. They added that the five states that legalized abortion earlier than 1973 [New York, California, Washington, Hawaii and Alaska] also experienced earlier declines in crime. Finally, they found that states with especially high abortion rates in the 1970s and 1980s had equally dramatic crime reductions in the 1990s, Life News reported.

Levitt went on to co-author the 2005 bestseller Freakonomics, in which he reiterated his thesis that the legalization of abortion is responsible for half of the recent drop in violent crime.

Gruber and the others acknowledged Levitt and Donahue’s findings, “Finally, we reconsidered the analysis of abortion and crime originally conducted by Donohue and Levitt to incorporate our updated methodological framework. The results of this analysis support the association between abortion and crime, but suggest that it is difficult to associate their finding with selection as opposed to the direct effect of cohort size.”

But, when the Obama administration wanted someone to develop his Health Care plan – he turned to Gruber. Now the Obama DOJ criticizes Ferguson officials for using the exact same racist ideology. Anyone confused?

Reprinted with permission from the Saynsumthn blog.