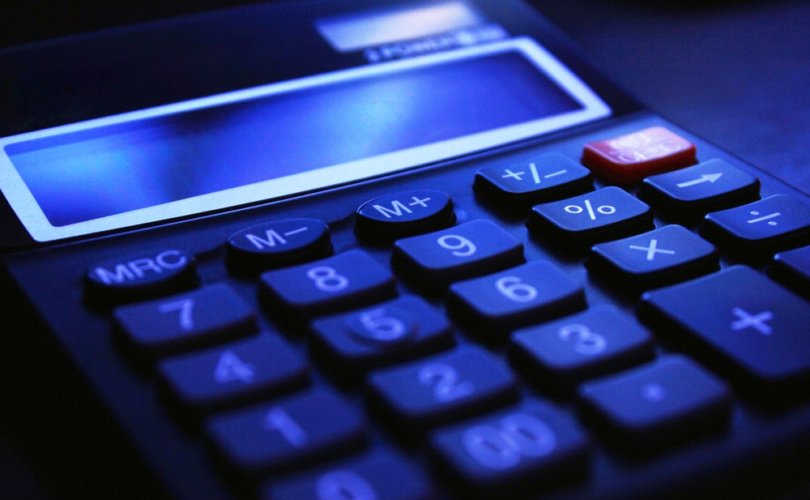 What does that number represent? How does this number relate to the number of abortions committed in the U.S. every year?

What I found was shocking, sobering, and heartbreaking.

My bachelor’s degree is in mathematics, so my automatic response was to begin crunching numbers. In 2018, a total of 2,839,205 resident deaths were registered in the United States according to the CDC website.

The current population of the United States is approximately 330,484,275 and climbing. One person is born every eight seconds, and one person dies every twelve seconds.[1] So what is the average number of deaths from COVID-19 following this model? As of the week of 10/17/2020, there were 208,633 deaths between February 1, 2020 and October 17, 2020 related to COVID. In order to get an accurate average, we have to take the total number of days. Adding up the total:

So then we have

Truly a tragedy and a sad loss of life.

But wait — what about the babies who are aborted and are not included in the 7,779 deaths per day figure?

The last recorded number that I could find for abortions is from 2016, where 623,471 abortions were reported in the United States. The estimation for the actual number of abortions in 2016 is 862,320.

That means that the number of babies who are aborted in the United States each day is almost triple the number of people who die daily with COVID-19.

Abortion has been legal, however, since the 1973 decisions of Roe v. Wade and Doe v. Bolton, and COVID-19 has been around only since December. What do the other numbers look like? How many Americans have we lost already to this tragedy? How many empty seats are there at the dinner table because your son or daughter or brother or sister was aborted?

Currently, abortion in the United States is on a downward trend with the peak of the crises occurring in 1990. The number of live births is also trending downward. This does not mean that the number of daily abortions is insignificant. In 2017, 18% of pregnancies ended by abortion — in other words, 1 out of every 6 pregnancies.

But let’s look a little closer.

Next we find the percentage of abortions to that potential number of live births through division and multiplication.

Twenty-five percent of the population that was supposed to be born in the last 40 years has been aborted? Do you mean to tell me that for every three babies born alive, one was aborted?

This is madness. Insanity. This is wrong.

It doesn’t end there. The highest recorded number of deaths in one day because of the coronavirus was 2,909 people. The most abortions performed in the United States in one year occurred in 1990, when 1,609,000 children are estimated to have been aborted.

In abortion’s heyday, over 4,000 American children were aborted every day. That is one child every 20 seconds. Three children every minute. The COVID-19 peak comes from one single day, but this is 4,408 babies, every day, for 365 days.

It continues. In 1980, the ratio of estimated abortions to live births was 43%!

That’s almost half of all pregnancies! That is absolute craziness!

You can argue to me about fetal viability; your body, your choice; and how a majority of abortions performed are done through medication and in the first 12 weeks until you are blue in the face, but at the end of the day, you will still be wrong if you defend abortion. Every person has a unique genetic code from the moment of conception and is a unique person with rights, born or unborn.

Two hundred eight thousand six hundred thirty-three COVID deaths to 57,368,870 abortions is not even half a percentage point. So yes, our great nation is in a crisis. But the crisis is not COVID-19; it is abortion.

On this upcoming Election Day on November 3, remember what really matters. All of the people who have tragically lost their lives and their futures to abortion. All of the unique, unrepeatable gifts to society that will never be.

This Election Day, you cannot support Biden/Harris and the ticket of death who want to allow abortions up to the moment of birth because you will be complicit in the greatest injustice of our time. The loss of life that occurs each and every day because of abortion carries more weight than any other issue on the table and is truly the greatest tragedy of our time.

Finally, if you have had an abortion, there may be unresolved feelings. Please know that you are not alone. There are programs, like Project Rachel, all over the country that help women struggling with emotional problems after abortion.

[1] This number was taken on October 22, 2020 from the Census Bureau Population Clock.