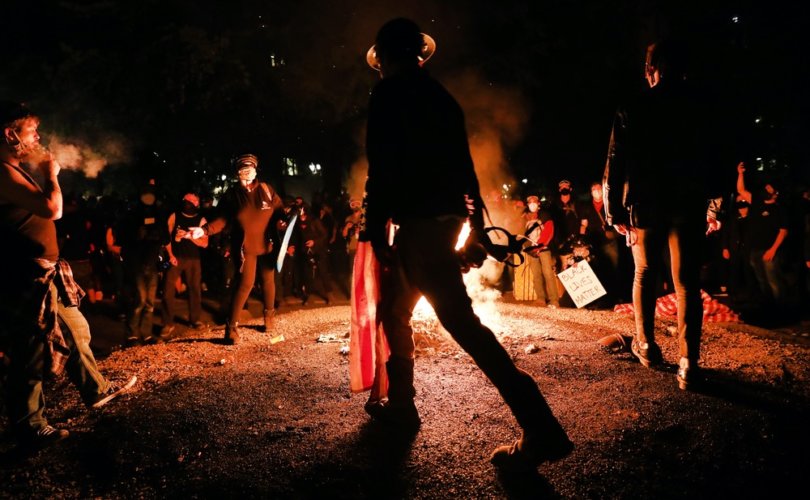 April 21, 2021 (American Thinker) – Rioting is a frequent phenomenon, complete with a professional traveling cadre that moves into a city when a spark ignites anger — as most recently happened in Brooklyn Center, Minnesota.  Take a look at the people arrested in Brooklyn Center:

With so many people and resources being expended, a bit of strategic thinking is being brought into play. Poor Blacks burning their own neighborhoods hurts the (nonprofessional) rioters and their families and is a burden that does not affect most people. It also doesn't win a lot of friends among the supposedly oppressed people the itinerant professional rioters seek to lead.

Now we are seeing signs that the urge to riot will be directed from above at the affluent and comfortable, a property destruction analogue of the slogan “Eat the Rich” that has enjoyed great popularity on some quarters. Anthony Gockowski reports in Alpha News:

A Minneapolis City Council candidate encouraged those who “feel like burning shit down” to target the city's wealthiest residents instead of causing further damage to poor communities.

“Just a personal thought — just in case y'all feel like burning shit down, the poor community is not your oppressors. FYI — lake of the isles has more then (sic) needed and won't be missed,” Rita Ortega wrote on her personal Facebook page, which is under her full name of Margarita, according to screenshots shared widely on social media Friday.

Margarita Ortega, running for #Mpls City Council Ward 9, suggests that those who want to burn things go to Lake of the Isles area.

These are your replacements for current incompetence. pic.twitter.com/9MGv8413Mc

Gockowski also reports: “According to her campaign website, Ortega was a policy aide at Minneapolis City Hall and spent 10 years working in city government.”

Lake of the Isles is a gorgeous neighborhood full of luxury mansions and is only a few blocks from the upscale Uptown shopping district that saw looting in the first wave of riots that followed George Floyd's death while in police custody. Lake Street, the largest east-west street in the south half of the city, was the scene of the greatest destruction, miles of it, and it terminates just beyond Uptown and just before Lake of the Isles.

In other words, it would be no stretch for the rioters to move into Lake of the Isles and sack the multimillion-dollar mansions that surround it.

A resident reported the threat to the Minneapolis Police, and they say they are taking it seriously:

FOLLOW UP: A resident from the Lake of the Isles area (and others) contacted MPD about @ritaforward9's comments & summarized the reply they got saying that it's being considered a “credible threat” & that person/s in MPD have forwarded the info to other units for investigation. pic.twitter.com/5pPbgaioil

But Minneapolis is not the only city where this thinking is taking hold. In Denver over the weekend, the governor's mansion as well as other upscale homes was vandalized.

There's been a shooting on my block 4 straight weekends. My block is rather expensive. Local or national media won't discuss. Doesn't fit the narrative. Our politicians and corporate media are pushing a dangerous level of lawlessness. Far more violence on my block than Jan 6.

Once the organized rioters spread to affluent neighborhoods, fear will grip a much wider swath of society than before. My guess is that it will trigger a backlash. But so pervasive is the propaganda urging white people to feel guilt that I cannot be confident that this will be the net effect.

The summer, AKA riot season, threatens to be even worse than last year.