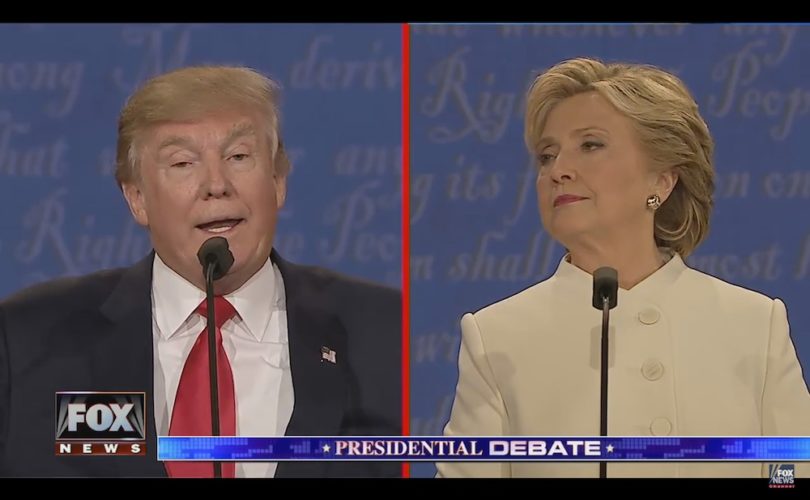 November 7, 2016 (LifeSiteNews) — Recently in Catholic circles, a videotaped homily seemingly bounced off every wall of social media like it was a just-unearthed version of the Dead Sea Scrolls.

I viewed the Sunday homily of Fr. John Lankeit, a priest from the Archdiocese of Phoenix, three times – the first two with hope and fulfilment, not dissimilar to a parent’s emotions when their child overcomes a challenging circumstance excellently. The third viewing, though, brought dismay.

I’m not here to recount Fr. Lankeit’s words, but would encourage all Catholic voters, regardless of political affiliation, to view his uncompromising thoughts. After my third view, I began to wonder why similar homilies weren’t being shared by Catholic bishops and priests all over America.

Something big is going on right now within the Catholic Church – far weightier and deeper than considering for which of these two unpleasant candidates to vote.

With one candidate standing on the cusp of unleashing unmitigated war on God’s natural moral laws and objective truth – truths that Plato, Socrates, Augustine, Aquinas, Teresa of Avila and many of history’s greatest minds have understood to be just, logical and good – the Catholic Church has largely chosen to remain silent.

I’ve heard it speculated as to the reasons for their silence: 1.) it’s political 2.) a spirit of cowardice 3.) their practicing prudence or 4.) they agrees that 2,000 years of Catholic teaching should, in fact, be changed.

There seems to be a strange mist about us, almost as if our shepherds have been asked to straightjacket logic, reason and clear teaching on abortion, gender, marriage and other grave rejections of Natural Law. But as obedient servants in persona Christi, they know they’ve signed up to be gallant proclaimers of Truth. Due to our fallen nature and unhappy ownership of concupiscence, our reason, passions and will are also fallen – so right now, perhaps more than ever, we crave courageous proclamations of Truth.

One might say our 2,000-year-old choir seems to have forgotten its melody. Put differently, it’s almost as if our shepherds have the cure for every single form of cancer, but have chosen not to implement it. Meantime disordered or malformed consciences roam wildly within their Church.

I hesitate to ask, but was a half-century of priestly avoidance of homilizing on the tougher aspects of Catholic teaching the very reason for some of their flocks’ malformed consciences. Sadly, and ironically, Catholics today are essentially being asked by the United States Conference of Catholic Bishops to vote their conscience, for whatever that’s worth.

Millions of Catholics will vote for the pro-abortion candidate tomorrow. It’s likely they’ll justify themselves by pointing a finger to the scoundrel in the other party and his myriad sins, behavioral defects and indiscretions. They may also point to their candidate’s seemingly compassionate stances on immigration, the environment, the poor, death penalty and similar social justice issues.

This line of reasoning is profanely flawed. The following example demonstrates why.

I have a friend named Tom, a successful contractor and married man with five children (who would be unhappy with me if he knew he was being shoehorned into this piece). For more than a few years now, Tom has chosen to meet with prisoners to help rebuild their dignity and feeling of self-worth. He’s been on several mission trips in South and Central America, where he’s helped rebuild towns, irrigations systems or simply to help put a smile on a forlorn face.

Tom feeds the poor at soup kitchens and lends a hand at various other outreaches for the needy. He has beers with friends going through divorce, crawling out of pornography addictions or who have lost jobs.

Tom keeps weekly appointments with Jesus at Holy Hour and often pops in to adore just because. He fasts once a week. He reads scripture and attends a few solid men’s ministries at his parish. He’s generous with his money. When informed last month that he was selected to be honored for his benevolence to a retreat house, he politely asked them to honor somebody else.

He judges no one. He’s as humble a man as I know.

Tom doesn’t rely on a candidate to tell him what his role for mankind is. Christ tells him in scripture. So he attempts to live it. He seems to know the greatest achievement he can attain on earth is his daily fight for holiness – so he serves mankind in a very real way on a daily basis.

I’m pretty lucky. I have a few more friends like Tom.

Now, with this example of Tom in mind, let’s take just one hot-button social justice issue: government welfare assistance for blacks in inner cities. In the 1960s, a large portion of Catholic leadership abandoned – or heavily shared – its Christ-directed duty to feed, house and care for the poor to the Federal government. Fifty years later, are the souls of these multi-generational welfare families closer to God?

For more than 15 years as a contractor I’ve spent many hundreds of hours in these communities in Southeast Washington D.C. And over and over, I pay witness to horror – drug use in the open, murders and shootings on job sites, a pandemic of theft, stressed-out Mom’s shouting vulgarities into their too-young children’s ears if they’re dawdling on their walk to school.

Abortions rage, drug lords rule neighborhoods, very few Dads are at home and there are killings every night. Again, are souls closer to God because of government assistance?

The government doesn’t do charity of heart very well.

The Catholic Church does.

This election has very little to do with Hillary Clinton or Donald Trump. It has a lot to do with the ailing soul of America and the strange place to which it’s lurching. It’s been said that obliging Natural Law means being rooted in reality and that being rooted in reality grazes up against God’s heart. What’s it say about ourselves when we abandon Natural Law – that we’ve attained a new kind of enlightenment? That we’ve progressed past antiquated cultural norms? That we’ve evolved? Well, maybe we have evolved, but God certainly hasn’t.

It’s generally agreed by Catholics that it was at the Last Supper when the role of the priesthood took birth. It was instituted by Christ, when in front of the gaping eyes of his apostles, he held high the bread that became his body, broke it and said, “This is my body” and asked them to do the same in remembrance of him.

In a very similar way and in a very real sense, it would seem bishops and priests would want to memorialize this night and hold high Truth for all to grasp, fathom and finally, live out by proclaiming, “This is His Truth.”

Happily, I have a half-dozen or so priests as close friends who proclaim hard, but beautiful truths from the pulpit throughout the year. Their parishes are booming. Two priests I know, who currently and formerly served as university chaplains, have collectively nurtured a dozen vocations in the past few years – and all they had to do was speak Truth. Like Christ from the cross, they innately know these college kids thirst for truth – so these two chaplains bring it, even when it sometimes seems the hardest thing in the world to do.

I’m friends with a few other happy priests who fully anticipate spending some of their priesthood in jail. These guys aren’t being melodramatic, just realistic. These two love truth. They probably don’t like it, but due to the swiftly changing culture, they’re forced to homilize on the Church’s uncompromising stances on contraception, marriage, in-vitro fertilization, gender and abortion. In a sense, they’ve put themselves on the front line and on a very personal level, they understand that some form of martyrdom is obligatory during these wobbly days of religious liberty.

We all need to be led to Truth. And we all need to be led to perfect virtue. Bishops and priests know the goal of life isn’t to be tolerant, evolved, accepting or even spiritual – but to be holy. They know the whole Christian life is about receiving the heart of Jesus Christ, and for continually asking for the graces to transform one’s self to imitate him.

But Catholics can&;t be led to the fullness of Truth when an embargo has been placed on some of the tougher aspects of it. I’ve heard it said that at the same time priests stopped talking about contraception that they began to start contracepting Truth. “Not to speak is to speak, not to act is to act,” said Lutheran theologian Dietrich Bonhoeffer, an anti-Nazi dissident.

Catholics can’t be led to Truth by silence – but it also can’t with muddled reasoning, flimsy catechism, a lack of courage and milquetoast presentations on the magnificence of Christ’s whispered words into Peter’s willing ear.

That so many bishops and priests have chosen the safe route in the face of a candidate who will give surge to the murder of the most helpless is chilling. “Whatever you do for the least of these, you do for me,” Christ tells us. To not speak for unborn children is perhaps the most serious moral failure the Church can commit.

One candidate supports abortion on demand up until the moment of birth. Ponder that sentence.

Alas, I get a little edgy in this Jubilee Year of Mercy declared by Pope Francis when I hear faithful Catholics insist they can’t vote for one candidate because of his behavioral issues and brashness. Fair enough – but what was Christ’s response to the myriad behavioral issues of his first pope – most especially after he denied him? In this Year of Mercy, it’s worth considering.

Did Jesus reveal his mercy to St. Paul, his greatest ambassador, in the aftermath of him crucifying hundreds of his first followers? Was mercy shown to Magdalene, Matthew, the woman at the well, the thief on the cross, even to the soldiers who were murdering him?

Even this deeply flawed candidate has said, clearly, that he would appoint judges with the same temperament of deceased Supreme Court Justice Antonin Scalia.

At the end of the day, Catholics have only one mission here on earth: to be conduits of God’s love and proclaimers of His Truth. I don’t know if the Catholic Church has changed – at least doctrinally – but it does seem her duty to proclaim the Truth at all costs has.