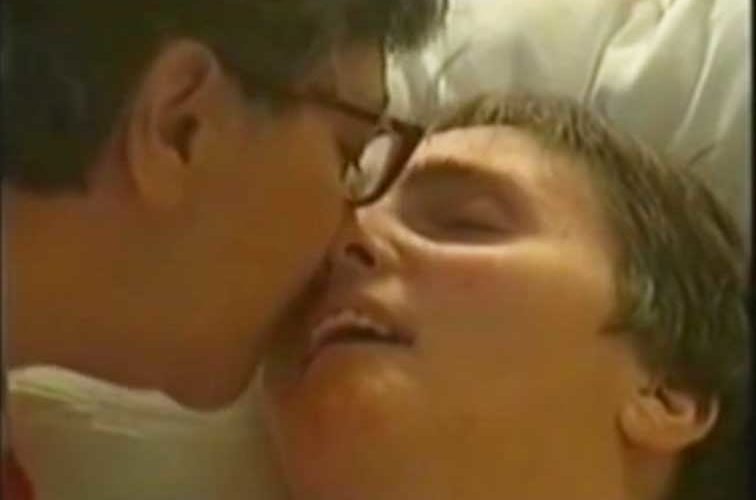 Terri being kissed by her motherVideo frame

March 29, 2021 (Priests for Life) — In my more than 30 years of pro-life work, I have talked to thousands of people about their own involvement in the movement, why and how they got started and what motivates them to continue.

We have talked about what happened in 1973 and wondered where all the Christians were when Roe vs. Wade made abortion legal. We asked ourselves how Christians could have owned slaves. We would tell stories about the few brave Christians who hid Jews during the Holocaust. We told ourselves if we had been around in those days, we would have risked all to save an innocent life. That’s what we said, at least.

Sixteen years ago, a young woman in Florida began an agonizing and painful journey toward death. Her husband, who had once made a vow to love and honor her through good times and bad, had her killed while the whole world was watching. Having already broken his marriage vows by living with another woman and fathering children with her, he went to court to have his legal wife, Terri, starved and dehydrated to death.

Terri Schindler Schiavo was 26 when she went into cardiac arrest in 1990. She never fully recovered and was declared to be in a persistent vegetative state. While her husband was fighting to have her feeding tube removed, Father Frank Pavone, national director of Priests for Life, was spending time with her. This is what he wrote about her in January 2005:

“She is not dying. She has no terminal illness. She is not in a coma. She is not on life-support equipment. She is not alone, but rather has loving parents and siblings ready to care for her for the rest of her life. She has not requested death …  I have been able to talk to her, to listen to her struggle to speak, to watch her focus her eyes and smile and attempt to kiss her parents. I have prayed with her, blessed her, and assured her that she has many friends around the country and around the world, who love her and want her to enjoy the same protections we all enjoy, even when we're wounded.”

The feeding tube was removed on March 18. Terri fought for her life for 13 days before closing her eyes for the last time on March 31, 2005.

I arrived in Florida one week before her death, expecting to see thousands and thousands of Christians in front of the hospice praying, singing and crying out for Terri. I expected to see all those people who said, “I would have been there to stand up if I were around during the Holocaust.” I was sadly disappointed.

Among the 150 people – at most – outside the hospice were some familiar faces from the pro-life movement. Father Pavone was there from New York, spending time at her bedside. Most of the pro-lifers I encountered outside were from out of town or out of state. It was hard to find anyone from the Tampa area there to stand up for Terri. For years I wondered where the Christians were when Roe vs. Wade legalized abortion and now I had the answer. They were sitting out the fight.

I spent the first day praying with people, talking about what could be done and simply being there in solidarity with our sister as she was dying. On the second day, I spoke to Terri’s sister, Suzanne Schindler, whom I had met in Washington, D.C. in January that year. She asked me to help guard Terri’s family and escort them around as everyone was swarming them.

I spent a lot of time just sitting with them and listening to stories about Terri and her life growing up. Her dad, Robert Schindler, told a story about when Terri ran over a cat and how upset she was. Her friends shared beautiful stories and memories I will treasure forever.

I also spent a lot of time in prayer with many different Christian leaders and friends. We would be desperate trying to think of actions we might take to save her life and then someone would say, “Let’s pray.” There was more spontaneous prayer than I had ever seen.

Small groups gathered up and down the street were praying, singing hymns and just reading Scripture out loud. There may not have been a large group there, but those who showed up were dedicated and faithful.

I spent a lot of time escorting the family through the media circus camped outside the hospice. I accompanied Terri’s dad through the crowd every night as he thanked all the supporters there for his daughter.

I talked to many of the behind-the-scenes media people who were obviously shaken by this tragedy. People from all different walks of life and political and religious backgrounds were there to take a stand. There were many non-Christian people there in support of Terri, and dozens of handicapped people from a group called Not Dead Yet. I even spent time in prayer with Rev. Jesse Jackson as he came to help the family and speak out for Terri. And I prayed with Fox News’s Sean Hannity and Operation Rescue’s Randall Terry.

Each night at about 11 I would leave the hospice to get something to eat and try to catch up on work. One night Terri’s brother, Bobby Schindler, joined me for a late dinner. When he left the restaurant, people asked him for the true story of what had happened – and was happening then – to his sister. They were shocked when they heard the true story.

On Wednesday, March 30, when I returned to my hotel for the night, my friend Will and I sat in the pool until 2 a.m. the next morning, discussing the past week and what else might have been done to save Terri’s life. I finally got to sleep at about 3 a.m. Just a few hours later, Will woke me with the news that Terri had died. We quickly packed our bags. As I got into the car to drive to the hospice, it really began to hit me what had just happened and I started to cry. I picked up my cell phone and called my children; I just needed to hear their voices and tell them I loved them.

I got to the hospice and stood guard outside Terri’s room to give her family some private time with her. Outside, I saw many of the media people fighting back tears. I watched reporters hugging the family. Many of the reporters and producers I had gotten to know expressed their grief to me, some of them on-air personalities who were affected greatly.

After the family had finished making their public statements, I made my rounds to offer my condolences and say my goodbyes. I told Terri’s family about all the people who had asked me to send their prayers. I thanked them for their strength and resolve in the fight for Terri’s life. I let them know that we at Stand True, the youth ministry I founded and that is now part of Priests for Life, would never let Terri be forgotten.

I kept that promise, and I will never stop telling her story.

Bryan Kemper is the youth outreach director for Priests for Life and the founder of its youth outreach Stand True. He is the author of Social Justice Begins in the Womb.