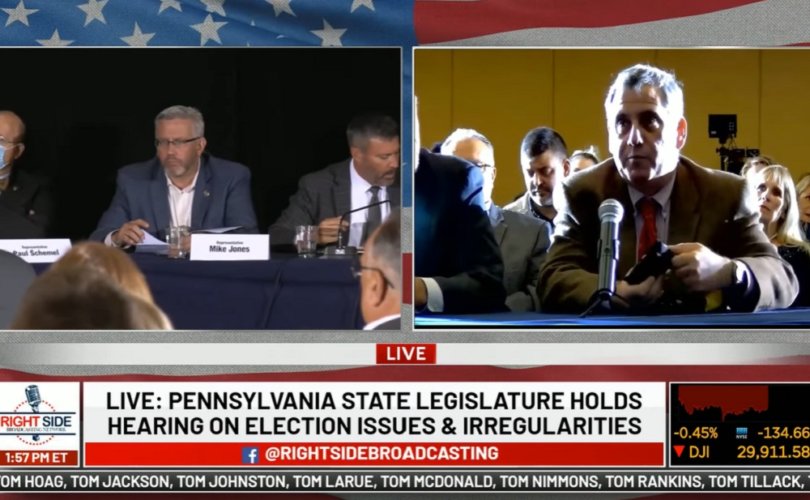 December 4, 2020 (Family Research Council) — Where are the real journalists? Certainly not in Pennsylvania, where one of the most jaw-dropping hearings in state history just took place. Most Americans haven't heard a word about it, which is no great mystery since the media is doing everything it can to make the election results look squeaky clean. The reality, Paul Kengor warns, is anything but. And a 570,000 ballot dump is a major reason why.

The audience, Kengor points out, gasped when they heard it. In Gettysburg, where legislators were poring over numbers and looking at all of the claims of voting manipulation, one particular bombshell took the room's breath away. An expert, testifying to the Pennsylvania Senate, took to his chair and started talking about “spike anomalies,” or, certain points in the vote processing where a huge number of ballots are processed in “a time period that is not feasible or mechanically possible under the circumstances.”

— Article continues below Petition —
Dept of Justice: Do your job and audit election in swing states now!
Show Petition Text
48182 have signed the petition.
Let's get to 50000!
Thank you for signing this petition!
Add your signature:
Show Petition Text

To that end, we believe that conducting forensic audits of ballots and voting machines, as well as issuing subpoenas to collect more evidence, would be a good start.

LifeSite supports President Trump because we believe he is trying to defend the Constitution, so that electoral fraud does not taint the result of the 2020 general election, and so that every legal ballot is counted.

Earlier today, Attoney General William Barr told the Associated Press that, "To-date, we have not seen fraud on a scale that could have affected a different outcome in the election."

But, the Trump Team of attorneys immediately countered by saying: "With all due respect to the Attorney General, there hasn’t been any semblance of a Department of Justice investigation."

And, that's what America wants right now: a serious investigation by the Department of Justice into seemingly irrefutable allegations of voter fraud!

Please SIGN this urgent petition which asks the Dept. of Justice to impound voting machines and ballots in swing states, and conduct a forensic audit of the apparent outcome in the presidential election.

Americans want the DoJ to do its job, and start scrutinizing evidence of voter fraud uncovered by the Trump Team of attorneys as well as other citizens acting independently of the President's Team, like attorneys Sidney Powell and Lin Wood, and the Thomas More Society's Amistad Project.

The Trump Team of attorneys say that none of the evidence they have gathered has been examined by the DoJ...none of their witnesses have been interviewed...no audits of any voting machines have taken place...and no subpoenas have been issued by the DoJ.

If true, it is scandalous that the Attorney General of the United States and the Department of Justice appear unable or unwilling to pursue this evidence of voter fraud.

Significant statistical anomalies in the vote tallies in key swing states demand explanation, as does the sworn testimony of individuals who say they witnessed substantial irregularities in the electoral process.

Because...the only way to tell if election fraud has occurred is to closely examine the voting machines and ballots where red flags appear, and because, at this point, the only actor capable of conducting such an investigation is the U.S. Department of Justice.

Moreover, it is vital to act now because significant anomalies have been identified, as in this graph which Senator Rand Paul posted, showing 4 massive data dumps which provided a "winning" margin for Biden in the three key battleground states of Michigan, Wisconsin and Georgia.

According to election security experts like Colonel Waldron (Ret.) who is a consultant with the Trump Team of lawyers, election fraud could have occurred in two principal ways:

Fortunately, both methods of possible fraud leave traces which can be identified during a forensic audit (aka, a scientific examination) of the voting machines and the ballots.

In the first instance, a change in the algorithm which is used to allocate or tabulate votes can be detected by forensic examination.

And, in the second instance, pre-printed ballots favoring one candidate can be detected by inspecting the ink used to fill in the oval next to a candidate's name.

Of course, this is a complicated business. But, the stakes are much too high for investigations not to take place.

In fact, it must be done to safeguard our representative democracy and to restore confidence in the security of our elections.

Should the Dept. of Justice fail to intervene, these elections will forever remain tainted by allegations of election fraud.

Thank you for SIGNING and SHARING this urgent petition asking the Dept. of Justice to do its job and conduct a forensic audit of voting machines and ballots in key swing states, and to follow-up on the evidence being gathered by the attorneys who are trying to protect the vote.

'Anomalies in Vote Counts and Their Effects on Election 2020': https://votepatternanalysis.substack.com/p/voting-anomalies-2020

Pulling out a chart, Ret. Col. Phil Waldren points to a 90-minute period on Election Day where 604,000 votes were counted in 90 minutes. But here's the astonishing part: 570,000 of those votes were for Biden and 3,200 were for Trump. In other words, Kengor does the math, “Biden scooped up this enormous batch by 99.4 percent. Incredible. Impossible. Scandalous.” And he wasn't the only one who thought so. The room was audibly shocked (1:28:00 of this video).

“If what Waldren alleges here is true,” Kengor argues, “then this would constitute one of the most insidious examples of documented voter fraud in the history of American presidential politics. This one spike alone would have erased Donald Trump's 600,000-vote lead over Joe Biden late Tuesday night, November 3. Biden has reportedly won Pennsylvania by about 70,000 votes. This one swing would have done it. If this is true, then this episode alone might well constitute a smoking gun affirming a fraudulent election in Pennsylvania.” “And yet,” he fumes, “this electoral bombshell has been completely ignored by the mainstream press.”

Another interesting piece of this, Kengor explained on “Washington Watch” Tuesday, is that of the 3.1 million mail-in ballots were sent to Pennsylvania voters (these are updated figures from the secretary of state's office), there was an extraordinarily high mail-in return rate. According to state election officials, almost 90 percent of voters sent in a completed ballot. That's almost unheard of, Kengor says. And “what it would have taken for Joe Biden to [surpass] Donald Trump's 700,000 vote lead in Pennsylvania seems statistically impossible.”

And, oddly enough, a majority of those late mail-in ballots only had Joe Biden's name circled. “I don't know how common that is to have only the president checked off and nobody else. But I find that too curious, especially given the opportunities for fraud, the lack of verification in the mail-in balloting process.”

The press, meanwhile, is completely MIA — even though these are legitimate issues that have the power to sway the election of the most powerful leader in the free world. “Trump's critics,” Kengor understands, “will want to dismiss the hearings as a partisan spectacle hosted by Pennsylvania Republican legislators. You can't do that. A real journalist would see enough here to at least merit making some phone calls or sending a few emails…” Look, he says, “whether you like Donald Trump or not, whether you voted for him or not, this should concern every American. If this were Joe Biden being victimized, I would likewise protest. The media sure as heck would. This is not right.”