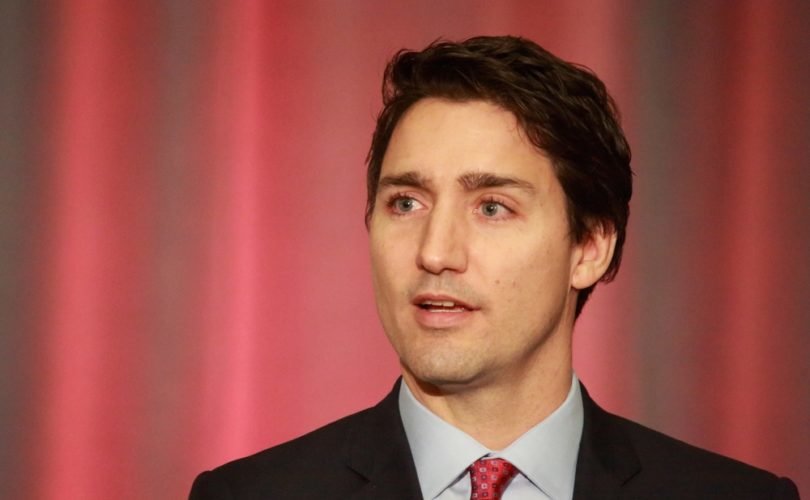 February 29, 2016 (MercatorNet) — Canada’s Prime Minister, Justin Trudeau, seems fond of “whipping”, or forcing his MPs to follow the Liberal Party line. He criticized his Conservative Party predecessors for “whipping out Canada’s CF18’s” in the Middle East and whipped them back in last week.

Contemporaneously, the Liberal government’s House Leader, Dominic Leblanc, announced that the upcoming euthanasia bill would be whipped and Liberal Whip, Andrew Leslie, confirmed this. Now the Globe reports this latter whipping might be whipped back in “because of the sensitive subject matter … It’s possible ministers and parliamentary secretaries will still face a whipped vote, but not necessarily all MPs”.

Both Leblanc and Leslie initially used a “Charter cloak” – the need for Liberal MPs’ “voting to uphold Charter rights” — to defend whipping and to shift responsibility for the decision to legalize euthanasia to the Supreme Court of Canada with Parliament’s role simply to endorse that: “The Supreme Court has made the decision (in Carter). It's our role to support that,” Leslie is quoted as saying.

But then “some Liberal MPs … questioned whether it is a true Charter issue – or one of conscience” which led to the reconsideration of whipping the vote.

Exploring the nebulous difference, if any, between “a true Charter issue” and “one of conscience” used as an excuse for a change of course could occupy law students indefinitely, especially as freedom of conscience is a Charter right.

And quite apart from the fact that the Supreme Court expressly left it, within broad and undefined guidelines, largely to Parliament to decide what the legislation should be, what about MPs Charter rights to freedom of conscience?

Here’s what I told the Joint Parliamentary Committee making recommendations on the legislation about protection of healthcare professionals’ freedom of conscience:

“Healthcare professionals must not be forced to provide or refer for euthanasia when they have ethical or conscience objections to doing so. It must be kept in mind that respect for physicians’ freedom of conscience is not only necessary to respect them, it is also required to protect patients and can be the last such protection against doing them serious harm or other serious wrongdoing”.

The same is perhaps even truer for MPs. Rewritten this is what that passage would say:

Members of Parliament must not be forced to approve legislation governing access to euthanasia, when they have ethical or conscience objections to the substance of that legislation. It must be kept in mind that respect for Members of Parliament’s freedom of conscience is not only necessary to respect them, it is also required to protect Canadians and can be the last such protection against doing them serious harm or other serious wrongdoing.

The “Charter cloak” is another obfuscation used to justify euthanasia, just like putting the “medical white coat” on it. The Supreme Court ruled the Charter applies to legislation governing euthanasia, but that in itself doesn’t tell us what the Charter requires or prohibits, other than prohibiting an absolute ban. Who can have access and under what conditions is for Parliament – that is every individual MP — to decide and there is a very broad scope for such decision-making.

This “hide behind the Charter” strategy is also a version of the “obedience to higher orders” defence to wrongdoing (“it’s not our decision, we were forced to do it”) which the law has never accepted as valid.

We can also question the ethics of Mr Trudeau’s initial order that MPs must vote for legislation that they haven’t even seen.

What if it follows the Netherlands and allows euthanasia of newborn babies with disabilities? Of people with dementias unable to consent for themselves? Permits consent from surrogate decision makers? Allows taking organs for transplantation from euthanized people, as in Belgium? Does not require terminal illness? Can be accessed by mentally ill people who are not physically ill?

Unlike some other issues with a yes/no answer, such as raising taxes, euthanasia is a complex issue. Even MPs who do not see it as unethical are not all willing to allow wide access to it with few safeguard mechanisms.

If the vote is whipped, it might be too much to hope MPs will follow their consciences, but if they don’t what does that say about the people governing us?

And what harm does it do to our democratic system? More mistrust of politicians and cynicism on the part of Canadians? And what about MPs’ obligations to their constituents in a representative democracy on a matter of such profundity and conscience as permitting the intentional infliction of death on a human being?

Whipping the vote makes it seem likely Mr Trudeau is worried some of his MPs won’t otherwise support the legislation. Or does he just want the false justification of an apparent unanimity? Or could he be trying to create an excuse for MPs who vote in favour, whose constituents are largely anti-euthanasia?

If the vote is whipped it will be yet one more example of the “totalitarian utopianism” of so-called “progressive values” advocates, who will not tolerate any dissent.

In the case of euthanasia this translates to a claim “we are only doing good, avoiding cruelty and being kind by allowing physicians to put suffering people out of their misery and thereby making our society a more compassionate one”.

There’s an old warning in human rights that’s a propos here: “Nowhere are human rights more threatened than when we act purporting to do only good”. The good we hope for blinds us to the risks and harms.

Margaret Somerville is founding director of the Centre for Medicine, Ethics and Law at McGill University in Montreal. Reprinted with permission from MercatorNet.