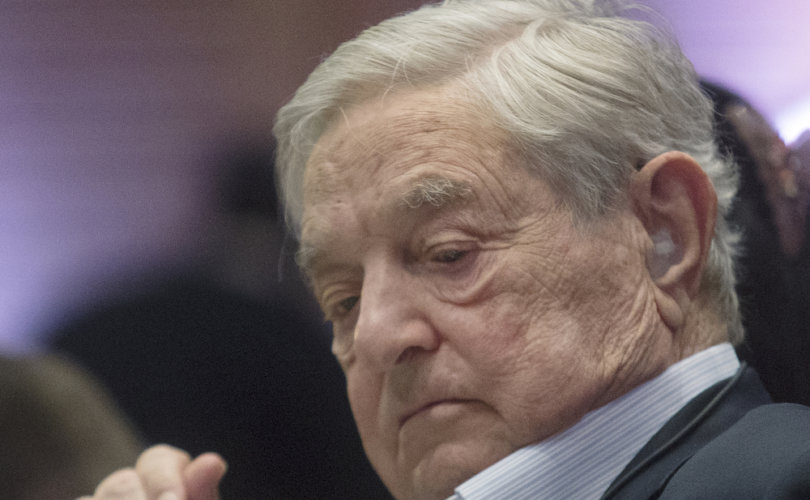 September 1, 2016 (LifeSiteNews) – The large sum of money billionaire George Soros put up to influence Pope Francis’ U.S. visit last fall before a presidential election year and to push the American bishops toward support for radical “social justice causes” was not the first time the leftist financier has used his wealth to try and negatively affect the Catholic Church.

The Catholic Church has continuously withstood and will always survive more formidable opponents than Soros. But this fact is clearly lost on him, given his history of attempting to nefariously impact the Church by funding groups labeled “Catholic” that oppose fundamental Church teaching, his backing of anti-Catholic causes with the United Nations, and now as seen with the recent leaked document from his Open Society Foundations, his influence on high-ranking Church officials to advance his causes.

Soros paid $650,000 in April 2015 to fund an initiative meant to shape the Pope’s U.S. visit to “shift national paradigms and priorities in the run-up to the 2016 presidential campaign,” emails revealed via WikiLeaks show. Among those priorities is inserting his supposed humanitarian nose in other entities’ business to promote his leftward-leaning causes, including population control, abortion, euthanasia, and homosexual “marriage.”

But Soros was also paying two leftist organiations to work to get “buy-in of individual bishops” who could be counted upon to show more public support of “economic and racial justice messages” and also secure a collection of bishops “who are aligned with the Pope.”

All-out fight for the U.S. Church

Part of Soros’ plan, according to the leaked document, was for one of his grantee groups to help plan the third World Meeting of Popular Movements at the invitation of Pope Francis. The Vatican organizes the conference to “partner with social movements and organizations.”

The Soros document states regarding the planned collaboration between its group and the Pope on the social justice meeting that “resistance to this inside the U.S. Conference of Catholic Bishops has been stark, and grantees are engaged in a live fight with a faction of the church that seeks to curb the Pope’s influence on social justice issues,” indicating a full-on battle between the Soros grantees and certain U.S. Church leaders to advance Soros’ social agenda.

Soros, a multimillion-dollar Hillary Clinton donor, has also financed the dissenting groups Catholics for Choice, Catholics in Alliance for the Common Good, and Catholics United.

“Catholics serve as a huge and influential voting block in the U.S. election,” said Attorney Elizabeth Yore, speaking with LifeSiteNews about this most recent effort by Soros to exploit the Catholic Church.

Yore, part of the Heartland Institute Delegation that went to the Vatican in April 2015 to urge Pope Francis to reconsider his trust in UN population control proponents that promote climate change, said Soros is “using the head of the Catholic Church to influence this key voting block” with the “bully pulpit of the papacy” to guarantee Hillary Clinton’s election.

Soros operatives entrenched in the Vatican directed Pope Francis’ Environmental Agenda in 2015, according to Yore, by delivering for the billionaire and the UN an apostolic exhortation on climate change as well as a prized papal endorsement of the UN Sustainable Development Goals and the Pope’s apostolic blessing on the Paris Climate Treaty.

In other attacks on Catholicism, Soros’ foundation is funding a three-year plan to eliminate pro-life laws around the world, additional leaked documents show, specifically targeting Catholic nations and using Ireland as a model to undo right-to-life protections in “other strongly Catholic countries.”

Soros had also helped to fund a 2014 effort to pressure San Francisco Archbishop Salvatore Cordileone out of speaking at the March for Marriage event that year.

The same Soros-funded group, Faithful America, along with homosexual activist group GLAAD, bullied Catholic comedian Bob Newhart in 2013 out of speaking for Legatus, a Catholic business leaders group that upholds Catholic principles, including in this case, the Church’s teaching on homosexuality.

A Soros-funded pressure group demanded an IRS investigation of the U.S. Bishops in 2012 for supposed “electioneering” against Barack Obama during that year’s presidential election, citing letters written by five individual bishops — Daniel Jenky of Peoria, Nicholas DiMarzio of Brooklyn, David Ricken of Green Bay, Edward Burns of Juneau, and Paul S. Loverde of Arlington — to their flocks reminding them of the importance of preserving religious freedom against the HHS mandate, protecting innocent life, and defending the institution of marriage.

It should come as no surprise that Soros throws his money behind his pet social causes to oppose the Catholic Church’s teaching, whether directly or indirectly, or otherwise engage in social engineering. As Breitbart reports, in addition to Hillary Clinton and Barack Obama, the financier is known to have funded “the orchestrated ‘refugee crisis,’ revolutions across the world, the war on police, Black Lives Matter, Occupy Wall Street, globalism, and more.”

Breitbart’s report, citing a New American piece, said, “This has led to Soros becoming known as “the Catholic Church’s public enemy number one.”

Other strikes against life and religious morality

His foundation had called on the UN member governments in 2012 to legalize prostitution and drug use, and castigated “conservative interpretations of religion” about sexual morality.

And in 2011, Cardinal Archbishop Juan Luis Cipriani of Lima, Peru, accused Soros and the U.S. government of pursuing imposition of a pro-abortion and homosexualist “agenda” on his country.

Two grantees received the $650,000 in Soros money for assailing the Church with his directive of shifting “the priorities of the U.S. Catholic church,” the WikiLeaks document from Soros’ foundation shows.

They are the well-funded Chicago-style “community organizing” group PICO (People Improving Communities through Organizing), which campaigns for, among other things, causes such as “Women’s Theology of Liberation” and other radical feminist or “womanist” theology movements, and also the left-leaning media advocacy group Faith in Public Life (FPL), which lobbies against the Church on abortion, homosexuality, and marriage, including active abortion promotion at the UN.

The two groups, which both profess to be faith-based yet took money from Soros, an atheist, were charged with forming “partnerships with the AFL, SEIU, and 11 faith groups during the September events in order to mobilize 10,000 people to public action and train 3,500 others as messengers of Pope Francis’ economic and racial justice agenda.”

The leaked document recapping the Soros initiative shows the Soros group planned to achieve its goals in part through one of the Pope’s key advisers, Cardinal Oscar Rodriguez Maradiaga, who had endorsed PICO’s work during a 2013 visit from the group to his diocese.

“In order to seize this moment, we will support PICO’s organizing activities to engage the Pope on economic and racial justice issues, including using the influence of Cardinal Rodriguez, the Pope’s senior advisor,” it states, “and sending a delegation to visit the Vatican in the spring or summer to allow him to hear directly from low-income Catholics in America.”

The success of the Soros-funded offensive on the Church also involved “buy-in of individual bishops to more publicly voice support of economic and racial justice messages in order to begin to create a critical mass of bishops who are aligned with the Pope.”

At the fall General Assembly of the U.S. Conference of Catholic Bishops last November, San Diego Bishop Robert McElroy, a Pope Francis appointee, argued emphatically to his brother prelates that their election guide as presented at the meeting for approval was out of step with Pope Francis’ priorities, in particular because it put too much emphasis on abortion and euthanasia and not enough on poverty and the environment.

“Pope Francis has in certain aspects of the social doctrine of the Church, radically transformed the prioritization of Catholic social teaching and its elements,” Bishop McElroy stated, garnering support from other “progressive” bishops, including Chicago Archbishop Blase Cupich. In a subsequent interview, Cupich concurred, “As Bishop McElroy noted, the issues of global poverty and the degradation of the environment now need to be put in that first tier of issues,” Cupich said.

Also gleaned from the Soros document was active opposition to Kim Davis, the Kentucky county clerk who was jailed for defying a federal court order to issue “marriage” licenses to gay couples and whom the Pope visited, and “the efficacy of the media campaign can be seen in the team’s ability to react to and counter the anti-gay rhetoric following the Kim Davis story.”

Media criticism of Davis had been strong in the wake of her jailing, and the Vatican press office’s horrible handling of Davis’ subsequent meeting with Pope Francis suggested something was amiss in the Holy See in terms of its take on religious freedom in the face of the homosexual agenda and marriage.

Using the pope’s visit to agitate the Church, state and local governments

Soros’ use of the U.S. papal visit has continued to generate positive results in his social agenda, the leaked document states. PICO’s local chapters have “capitalized on the momentum of the Pope’s visit” as Soros’ group planned, pushing for “a range of state and local policy reforms,” and also with both PICO and FPL having “been able to use their engagement in the opportunity of the Pope’s visit to seed their position in the long-term project of shifting the priorities of the U.S. Catholic church to focus on issues of injustice and oppression.”

The ability to achieve many of Soros’ goals “will be significantly stronger for years to come if PICO and FPL are able to use the capacities seeded under this grant to shift the U.S. Catholic Church to be a voice on behalf of the poor and communities of color,” the document states, “and it’s exciting to see this long-term process is now underway.”

George Soros defines himself as a philanthropist on his website and also a supporter of democratic ideals, yet he is not above using intimidation or even toppling governments and economies to achieve his agenda.

Further, his attempts to procure the soul of the Roman Catholic Church as though it were a commodity by using his wealth like a club, do not represent the principles of democracy or generosity but demonstrate iniquity and elitism.