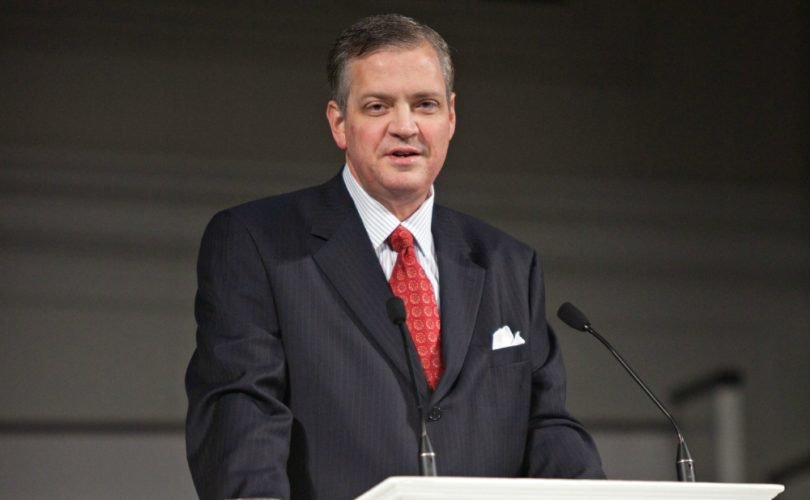 LOUISVILLE, Kentucky, October 19, 2015 (LifeSiteNews)—There was a time when Church and State cooperated – when governing powers welcomed the influence of Judeo-Christian values and sought to harmonize its laws with morality. But since the radical secularization of Western society, Christians have been forced into an adversarial, politically incorrect role, much like the early Church in times of persecution. Since a “culture of death” began to dominate the West, genuine Christians have become counter-cultural.

The leader of America's largest Protestant denomination, Dr. Albert Mohler, applies this Christian counter-culturalism to the latest politically correct trend in society: the approval of sodomy and sodomitical relationships – in other words, gay “marriage.”

Rev. Mohler writes that Christian love “does not rejoice at wrong, but rejoices in the right,” including the good of others. Genuine love does not enable abuse or influence people toward harmful behaviors, including homosexuality.

Sodomy is very harmful physically, psychologically, emotionally, and spiritually –sodomy hurts, and those who honestly care about others do not encourage its practice or imply approval in any way.

According to Dr. Mohler's latest book, We Cannot Be Silent, Christians should not attend a same-sex “wedding,” because to attend the celebration implies condoning the behavior. The Southern Baptist Seminary president writes that the Christian's presence at a homosexual ceremony signals “moral approval” of something terribly harmful to both parties.

Mohler pointed out that avoiding participation in homosexual rites is simply living consistently as a Christian. “At some point, attendance will involve congratulating the couple for their union,” Mohler wrote. “If you can't congratulate the couple, how can you attend?”

With compassion and understanding, Mohler writes that missing the ceremonies of gay friends, relatives, and loved ones will be excruciatingly difficult, but there are other ways a Christian can affirm and love those who suffer from same-sex attraction without implying approval of gay “marriage.”

Mohler wrote that Christians should not shun or isolate themselves from homosexuals. “We should make every effort to develop real and authentic friendships with our LGBT neighbors,” he wrote. He conceded that Jesus ate with sinners, but he pointed out that the Lord never approved of sin. “His constant call was to repentance.”

As expected, homosexual activists have vehemently denounced the book, saying it will further divide homosexuals from their families. Chris Hartman, director of the Fairness Campaign, a homosexual advocacy group, commented, “Dr. Mohler's self-righteous intractability on this issue … can cause nothing but strife, heartache and hardship.”

Some Catholic bishops have likewise urged parishioners not to attend homosexual weddings. Bishop Michael Jarrell of Lafayette, Louisiana, wrote in a letter to his flock, “All Catholics are urged not to attend same-sex marriage ceremonies.”

Bishop Joseph Edward Strickland of Tyler, Texas, wrote to the faithful that “the solemnizing of [homosexual] relationships” is intrinsically immoral, and “[t]here are absolutely no grounds for considering unions between two persons of the same sex to be in any way similar to God's plan for marriage and the family.”

Bishop Thomas J. Tobin of Providence wrote, “Our respect and pastoral care, however, does not mean that we are free to endorse or ignore immoral or destructive behavior[.] … We are required to 'speak the truth in love' (Eph 4:15)[.] … 'Homosexual acts are intrinsically disordered,' and always sinful.” The Rhode Island hierarch wrote that attending same-sex ceremonies “might harm their relationship with God and cause significant scandal to others.”

Fr. Edward McIlmail summarizes the Catholic view in his response to a parishioner's question about attending her niece's same-sex reception: “Receptions are for celebrating, and morally this isn't much to celebrate in this case. In fact, by not attending you would be living in accord with the promises you made when you became godmother to your niece. You are giving witness to your faith.”

There are 15.5 million Southern Baptists in the United States.