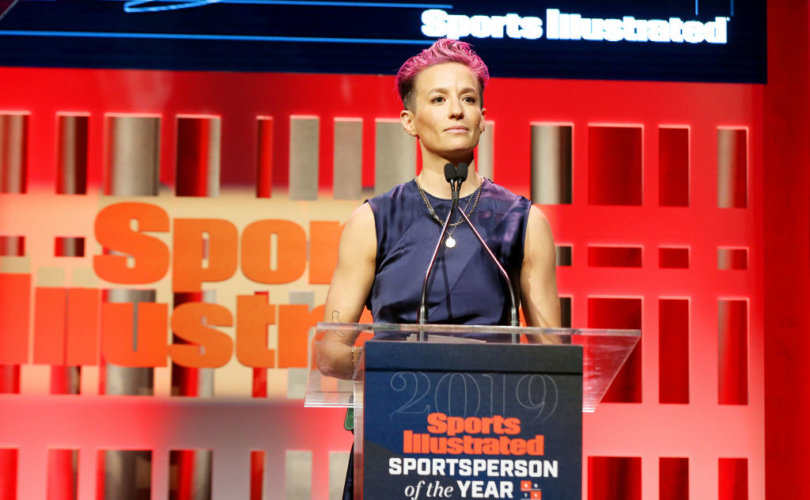 December 19, 2019 (LifeSiteNews) – Megan Rapinoe was recently named Sports Illustrated Sportsperson of the Year. She scored the winning goal for the US Women’s National Soccer Team in the final of the 2019 World Cup against the Netherlands. Rapinoe, who is an out lesbian, is notable not just for her soccer ability, but also for her anti-Trump, anti-patriot, and pro-LGBTQ political opinions.

Rapinoe is known for her blunt comments, using her public platform as an elite athlete representing the United States of America to promote her political views. In the past year, it’s been hard to forget Rapinoe’s remarks toward our nation’s president.

She openly stated prematurely that she would not go to the White House when they (the US Women’s Soccer Team) won the World Cup. According to Sports Illustrated, Rapinoe stated, “I’m not going to the f—- whitehouse.”

Upon scoring a winning goal in one of the premier games, Rapinoe struck her iconic pose — arms extended, head tilted up, and facing the crowd with a defiant look on her face. One can’t help but wonder if this was in opposition to the president and anyone who doesn’t agree with her.

Rapinoe coupled this anti-Trump sentiment with her anti-American action of taking a knee for the National Anthem during a game. She was joining in on this unpatriotic stance with certain NFL players, like Colin Kaepernick, who had become notorious for doing this.

In their annual publication honoring the Sportsperson of the Year, Sports Illustrated described Rapinoe as a “pink haired national hero” and “the pink-haired lesbian winger,” since Rapinoe is known for her short pink hair on and off the soccer field. Both she and her twin sister declared they were lesbian in their sophomore year of college and now Rapinoe openly dates Sue Bird, a Women’s National Basketball Association (WNBA) player.

It is only the 4th time in the 66-year history of the magazine’s award that this honor has been given to a female athlete.

According to Sports Illustrated, “she dominated…without fear” and “became a voice for so many across the world.” The magazine even acknowledges that Rapinoe won her recognition “not because of her newfound fame, but because of how she’s handled it.”

Having been a Division I collegiate athlete, I understand just how challenging it is to rise to the elite levels of competition that Rapinoe has. Additionally, I recognize that there are challenges that female athletes face that male athletes may not. I by no means desire to undermine Rapinoe’s athletic ability.

However, Sports Illustrated’s decision to name her as Sportsperson of the Year is so much more than recognizing someone’s athletic performance. I believe Sports Illustrated used this outspoken athlete to promote what appears to be their own ever-increasing leftist opinions. What is supposed to be a “sports” magazine doesn’t hide the fact that Rapinoe was chosen for this recognition based on her actions on and off the field. In fact, her off-the-field “performance” seems more important to the magazine than her athletic ability.

Is Rapinoe the type of woman parents want their children looking up to? How can someone be held up as a role model who openly disrespects the president, holds contempt for the American flag by taking a knee during games, and who blatantly promotes her homosexual identity? Rapinoe is not someone to be praised as Sports Illustrated has done through their homage to her and her actions in their recent publication.

Instead of making this “pink-haired lesbian” an idol, let’s teach our nation about the people who fight for our freedoms, respect our flag, defend family values, and are true feminists (traditional ones, not these so-called feminists of today’s society). Let’s honor and elevate the athletes who humbly play their sport through their God given talents and hard work.

Nice try, Sports Illustrated, but I’m not to be fooled by your political agenda and attempt to promote athletes who contradict what a national team-caliber athlete should represent.

Rapinoe is being praised for unpatriotic acts, anti-president remarks, curt comments, and harsh demeanor…oh and her soccer skills, too.