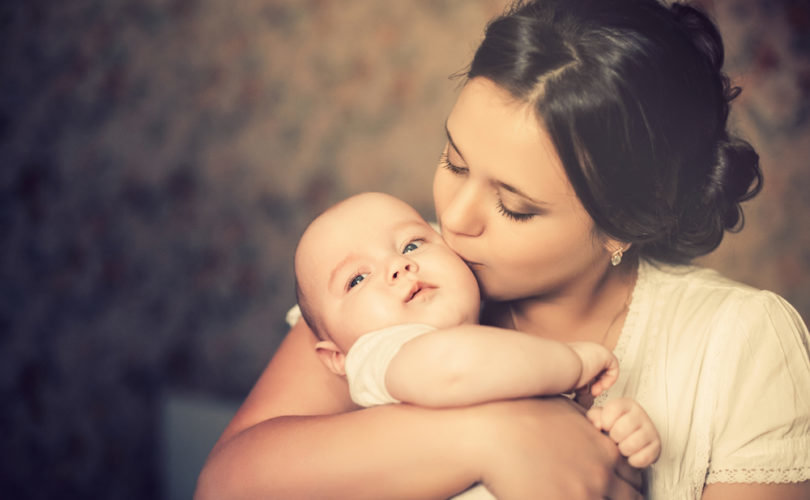 August 26, 2015 (PregnancyHelpNews) — It is often debated whether or not protests like the nationwide Planned Parenthood demonstrations Aug. 22 are an effective means for positive change.

For at least one mother, “Carrie,” whose appointment to abort was slated for Saturday morning at a Planned Parenthood in St. Louis, the answer to that question will ring loud and clear for the rest of her life—as well as that of the baby whose life she found the strength to save that day.

As it turns out, Carrie—who was 10 weeks pregnant—was one of two mothers to choose life at the rally, which drew 750 attendees despite rainy conditions that would have dispersed a less resolute crowd.

Zina Hackworth, a homeschool mom and self-described “professional pro-life volunteer,” was the first to connect with Carrie at the rally—which was one of over 350 gatherings of the #ProtestPP around the country that included well over 70,000 participants.

As Hackworth took her place just outside the security gate at the entrance of the Planned Parenthood facility at 4251 Forest Park Ave. that is part of a regional affiliate performing over 7,000 abortions every year, she noticed Carrie walking out of the facility.

Accompanied by a security escort, Carrie was waiting for her abortion, and had come outside for the first of two smoking breaks that would change her life forever.

“She was going through the crowd, heading down the street,” Hackworth says. “As I walked behind her, there was a young family there, and I asked the dad, ‘Can I borrow your daughter to go talk to her?’ I started talking to her about the help that’s out there for her, about how we love her and her baby, we’re there for her, and there’s free help across the street.”

As Hackworth appealed to her, she pointed to a mobile ultrasound unit owned and operated by Thrive St. Louis Abortion Information and Women’s Medical Services, which was on site and available to women during the rally.

Though Carrie shut down the conversation after a momentary exchange, her reaction to the fetal models—including a 20-week fetal model—Hackworth was able to show to her in the dialogue sparked a hope in Hackworth that she in turn spread through the crowd.

“I saw the look on her face when she saw those fetal models—it really did take her aback,” Hackworth said. “It was almost as if she was stunned when she saw them, and saw what she was getting ready to do.

“I said, ‘Please, everyone, pray for her. As she’s walking back with that escort, let her know that you love her and her baby, and that there’s help for her.’ I said that to everyone on the sidewalk, and there were hundreds of people there. By the time she got back to the gate, she went back in. So I told everybody, ‘Please let’s pray that she comes back out.’”

Though she went back into the abortion clinic—as Hackworth pointed out, with the escort’s hand firmly on her back—it wasn’t long before Carrie reemerged for another cigarette.

This time, however, Carrie would linger. Before long, it would become apparent to Hackworth and others that she had no intention of heading back in the doors to follow through with her abortion. As Hackworth and a group of her fellow protesters begged God to deliver Carrie and her baby from abortion, a car pulled up, and Carrie got inside, setting off a spontaneous round of applause as she left the property.

“It was just a wonderful, wonderful day, to see her relieved,” Hackworth, the founder of two pro-life ministries, “This Race Will Self-Destruct,” and “More Rebellious Members,” said. “She was conflicted, you could see that, and this escort kept putting all kinds of lies in her head. So, to see that victory was absolutely incredible.”

“You have to be on the street to save those babies.”

As Carrie left the parking lot, she was greeted by another member of the St. Louis area pregnancy help community, Mary Maschmeier, who has actively engaged women waiting for abortions for the last 30 years, and has connected them material aid in recent years through her non-profit organization, Constant Witness.

Maschmeier, who is at the Planned Parenthood facility an average of two to three times per week, had already been instrumental in helping a mother who was eight weeks along choose life for her child with the assistance of Thrive’s mobile unit earlier in the day.

Leaving the property, Carrie rolled down the window at a stoplight and talked with Machmeier. The two exchanged contact information, and Carrie promised to call later in the week to get assistance from Maschmeier’s volunteer organization, which has seen two dozen women make a choice for life in the past year alone.

“You have to be on the street to save those babies,” Maschmeier said. “It doesn’t happen when you’re at home, sitting in your comfortable chair.

“I’m not interested in only defunding [Planned Parenthood], I’m interested in closing their doors. That will only happen when all of the Christians come out and stand on the street as they did on Saturday. That’s what we have to do. That’s where we have to be.”

Reflecting on the team effort that Saturday’s life-saving effort represented, Connie Eller of Missouri Blacks for Life and Our Lady’s Inn Maternity Homes marveled at the collaboration that took place on the very premises that has been ground zero in the battle for life in St. Louis.

“It took everyone to save that baby, and everyone did,” Eller said. “This is how it looks when the Holy Spirit moves among a crowd of people who are open to His leading and His choreography of prayer, action, and gratitude.”