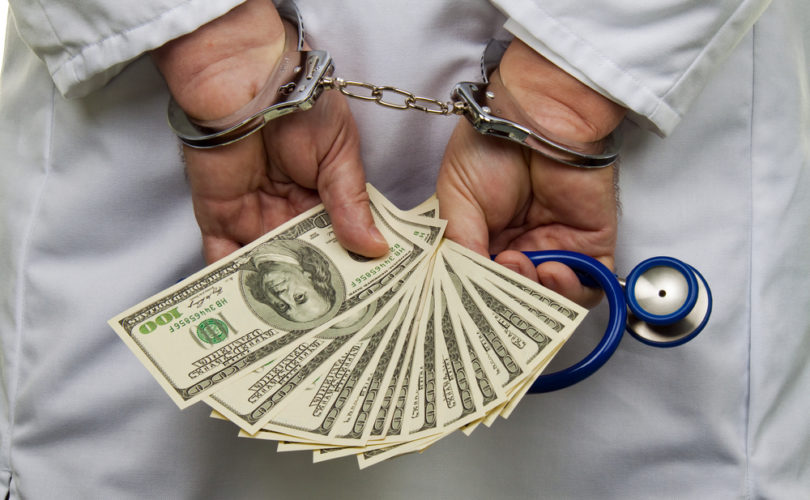 July 29, 2015 (LiveActionNews) — If all the naysayers – and the White House, for that matter – are looking for proof that Planned Parenthood broke federal law, they need look no further than the statements of Planned Parenthood’s top officials.

Unfortunately, as Lila Rose discovered this week on Hannity, Planned Parenthood’s defenders are not the least bit interested in even looking at the law. If they don’t read the law, they can continue to blindly blither that they don’t see anything illegal going on.

First, “selling the body parts of babies and getting profit from them;” second, “they’re using partial-birth abortions to do this;” and third, “they’re manipulating the abortion procedure, without the woman’s consent or knowledge, in order to better harvest the organs of the babies they’re going to be killing.”

In fact, Rose was being generous. There are four federal laws and regulations that Planned Parenthood has almost certainly violated.

1) Illegal Profiting from the Sale of Baby Parts

The law against selling fetal tissue is here.

This first legal issue – one of profiting from the sale of baby parts – has been covered in detail here and here. These two articles were written after only the first video had been released.

Dr. Deborah Nucatola was clear that profiting was better than mere reimbursement (emphasis mine):

I think for affiliates…they want to break even. And if they can do a little better than break even, and do so in a way that seems reasonable, they’re happy to do that.

Legally, however, “seeming reasonable,” is not reasonable. In this case, it would amount to breaking the law. Proof that Planned Parenthood has profited off the sale of baby parts is also implicit in Dr. Mary Gatter’s admission in the full footage version of the second video.

Gatter explained that at Planned Parenthood Los Angeles, “we didn’t have to do anything. There was compensation for this.” Getting compensation for doing nothing is called profit, not reimbursement. This really isn’t a difficult legal concept.

Gatter also went on to say (emphasis mine):

Well let me agree to find out what other affiliates in California are getting, and if they’re getting substantially more, then we can discuss it then. … I mean, the money is not the important thing, but it has to be big enough that it is worthwhile. …

It’s been years since I talked about compensation, so let me just figure out what others are getting, if this is in the ballpark, it’s fine, if it’s still low then we can bump it up. I want a Lamborghini. [laughs]

Legally speaking, reimbursement is based on your own personal costs, not on “what others are getting.” Planned Parenthood’s Dr. Deborah Nucatola, in the first video, stated that the payments would vary, based on the clinic. She seemed to have some concept of the price varying based on how it looked, at least. Not so with Gatter. If others are getting paid more for a baby liver, she wanted to be paid more!

One has to look no further than the Federal Partial-Birth Abortion Ban Act and the U.S. Supreme Court case that upheld it, Gonzales v. Carhart, to know that partial birth abortions done for the purpose of collecting baby parts are illegal. Plain and simple.

Nucatola tries to reason away the law:

Partial-birth abortion. It’s not a medical term, it doesn’t exist in reality. … [N]umber 1, the Federal Abortion Ban is a law, and laws are up to interpretation. So there are people who interpret it as intent. So if I say on Day 1 I do not intend to do this, what ultimately happens doesn’t matter. Because I didn’t intend to do this on Day 1 so I’m complying with the law.

Yet despite her attempt, she’s been caught with her pants down, or her baby half-delivered, so to speak.

The federal law says that it is illegal to “deliberately and intentionally” perform a partial-birth abortion (and yes, partial-birth abortion is detailed in the law and in Gonzales). And no, there are no “technicalities of intent” here. When a man commits rape, does it matter what his intent the day before was? Or does his intent in the moment of his deliberate action count, for legal purposes?

I don’t think that answer is difficult to come by.

Federal law states that an abortionist is not allowed to change procedure to collect “tissue:”

No alteration of the timing, method, or procedures used to terminate the pregnancy was made solely for the purposes of obtaining the tissue.

The timing and method of abortion should not be influenced by the potential uses of fetal tissue for transplantation or medical research.

“Influenced” is actually a very small word, if you consider it. To be influenced by something is even to take it into consideration. It is abundantly clear that Planned Parenthood is more than happy to modify, change, and manipulate its abortion procedures, again and again, to collect fetal tissue.

According to Nucatola, the “reasonable” standard for an abortionist is to change abortion procedure to provide body parts to a buyer. I do not think that word “reasonable” means what she thinks it means.

Nucatola: “With that said, if you maintain enough of a dialogue with the person who’s actually doing the procedure, so they can understand what the end-game is, there are little things, changes they can make in their technique to increase your success.”

Buyer: “Even though they have a set way that they do it, they’re open to changing that?”

In the full footage transcript of the first video, there are loads more evidence that Nucatola, as an abortionist herself, personally changes procedure to collect tissue. She instructs the buyers how to get other abortionists to do the same, encouraging them to meet up with the abortionists – specifically so they will be more likely to modify their procedures to collect tissue.

For the sake of time, however, we will move to Mary Gatter.

Gatter explicitly advocates for throwing off federal law and the regulation on not changing abortion procedure. In yet another legal problem, Gatter also indicates that women’s informed consent matters very little to her. She goes to town explaining her willingness to violate law:

So that’s an interesting concept. Let me explain to you a little bit of a problem, which may not be a big problem, if our usual technique is suction, at 10 to 12 weeks, and we switch to using an IPAS or something with less suction, and increase the odds that it will come out as an intact specimen, then we’re kind of violating the protocol that says to the patient, “We’re not doing anything different in our care of you.” Now to me, that’s kind of a specious little argument and I wouldn’t object to asking Ian, who’s our surgeon who does the cases, to use an IPAS at that gestational age in order to increase the odds that he’s going to get an intact specimen, but I do need to throw it out there as a concern. Because the patient is signing something and we’re signing something saying that we’re not changing anything with the way we’re managing you, just because we agree to give tissue. … I’m not making a fuss about that.

Gatter even later goes on to admit that she knows this is wrong, when she rejects extra payment specifically designated for the change in procedure: “you’re shading into the area of you’re paying me to do something that’s not right.”

Did you catch that? Something that’s not right. Yes, by the admission of it’s own top officials, Planned Parenthood has concluded that the change in abortion procedure to collect baby parts – and the act of ignoring a woman’s consent – is “not right.”

Even if Planned Parenthood could prove that they have never made one red penny off of fetal tissue “donation,” the abortion giant would still be in hot water, also known as legal trouble.

Another HHS provides provides (emphasis mine):

The decision to terminate a pregnancy and procedures of abortion should be kept independent from the retrieval and use of fetal tissue.

This means that the doctor performing the abortion should not even know that this particular baby’s mother has consented to give the body parts to research.

When fetal tissue is used in research, it is often sent from the hospital or clinic that performs the abortion to an affiliated research center, Hyun said. Another safeguard in the Health and Human Services guidelines is that a clinical team that performs the abortion cannot know that the fetus will be donated, to help ensure that they do not change how they perform the abortion, or jeopardize the safety of the woman, Hyun said.

These guidelines have been solidified and become more widespread since the 1990s, Hyun said, adding that, “I believe [all clinicians] are well aware of them now.

And yet, despite this federal provision – designed to protect the safety of women – the Nucatola and Gatter transcripts are filled with talk of getting the abortion doctors on board with the buyers, so that they will specifically perform their abortions in a way that the proper tissue will be harvested.

Nucatola explains for us:

It makes a huge difference. I’d say a lot of people want liver. And for that reason, most providers will do this case under ultrasound guidance, so they’ll know where they’re putting their forceps. …

So then you’re just kind of cognizant of where you put your graspers, you try to intentionally go above and below the thorax, so that, you know, we’ve been very good at getting heart, lung, liver, because we know that, so I’m not gonna crush that part, I’m going to basically crush below, I’m gonna crush above, and I’m gonna see if I can get it all intact.

According to Nucatola, abortionists will change the baby to breech, for the sole reason of collecting a baby’s brain.

Additionally, the abortion team doesn’t just know which fetuses will be donated, but they even participate in choosing which ones will be used for which donations. (Check the transcript for Nucatola’s morning “huddle” comments.)

Could anything be more stunningly and obviously illegal? How, in the name of anything remotely ethical, can the White House continue to stand by Planned Parenthood?