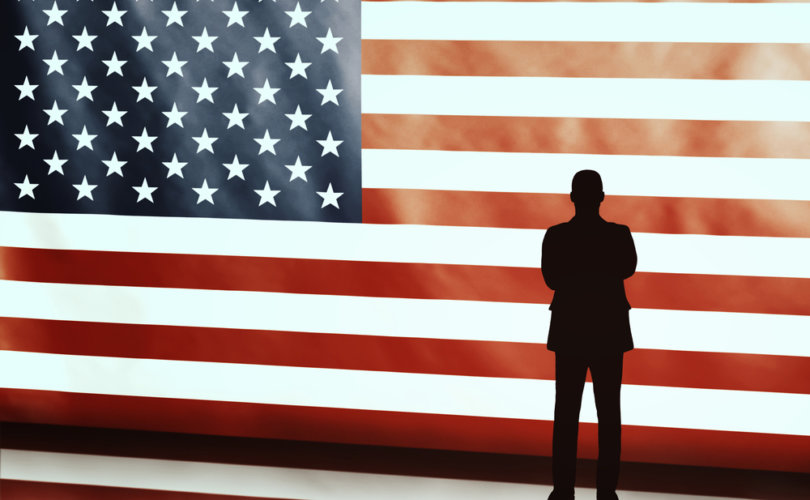 Does it seem that way to you? It might not seem like a crisis of truth when you’ve lost your job, while the CEO of the corporation that let you go is making an eight figure salary, or when you are a small business owner being crushed by competition from a giant corporation that receives government subsidies.

But that is what I am talking about. A failure of the truth is at the center of each of these problems.

The last eight years have seen an ever-accelerating push from our government for an agenda that is—let’s be frank about it—deranged. Social institutions of all kinds are breaking down, foreign policy is in disarray, racial and cultural tensions are suddenly at the boil, and we find ourselves hurtling through increasing social chaos toward complete disaster. It didn’t begin eight years ago, but the derangement has accelerated dramatically over the last eight years.

That is why you are here. You have known, in your minds and hearts, that many of the developments in our nation are deranged. But when you have turned to the usual places for help in applying the brakes, your voice is unheard. Those who listen least are in that bloated bureaucracy we call the federal government. Indeed, the current administration has gone out of its way to push for, and celebrate, our social derangement as though this is what you want. The Democratic candidates have been arguing strenuously over which of them is more committed to this derangement. This is no longer a surprise. The surprise is that the apparent Republican candidate has spent his entire life aiding and abetting the Democrats and their agenda of social derangement.

I am here to offer my services—not simply to slow the acceleration of our derangement, but to put a stop to it. And for that job, you don’t need another bully. You need a champion, with the virtues of a champion. I want to be that champion. I will be the champion of truth—the truth that you know well, but which has been banished from Washington.

The crisis in our land is a crisis of truth. We are being told to believe things that are obviously false—things that cannot possibly be true—and to accept that the most obviously true things are false.

Let me give a few of the most glaring examples.

And yet, when you protest, you are bullied with name-calling and threats. You are told you are an irrational bigot. But you know this is not true. You are not a bigot; you are not irrational. You wish to treat every human being with the full dignity that belongs to him or her simply due to the fact that he or she is human. But it is not in keeping with human dignity to live a lie. Nor is it in keeping with human dignity and human rights to demand that everyone be a party to the lie.

Does it make sense that people who oppose abortion and contraception are being forced to provide these things to their employees, even when the employees are also morally opposed to them? Although the Supreme Court has managed to forestall the worst of this lunacy for the time being, this administration is still looking for ways to make it happen.

And yet, when you protest, you are threatened with fines and legal actions for failing to fall in line. You are already convicted, in their eyes, of bigotry and hatred, of conducting a war on women. But you know this is not true. You do not hate women. Half of you are women, and you know that freedom is not going to come by destroying our unborn children. You know that human dignity is not protected by forcing people to participate in what they believe to be evil.

Democratic candidate Hillary Clinton has been a party to these scams, and she has clearly indicated that she intends to continue to deceive the American public. Republican candidate Donald Trump will do the same. He is a well-documented scam artist. Can anyone say “Trump University”?

Neither of these candidates is the slightest bit interested in the truth of the human person, or of human sexuality. They are not interested in the truth of our fundamental freedoms, such as freedom of religion, of speech, and of the press. They do not care about private property (except their own), the common good, or the protection of the powerless from the powerful through a rule of law and constitutional order. They do not believe in the importance of a virtuous people, dedicated to the good of others and protected by a limited government. And they especially do not care that America will suffer if despotic power is concentrated in a centralized and bureaucratized executive branch.

These are the fundamental truths that made America the greatest country on earth. But now, even in America, the untruths and the half-truths proliferate, and to the same end: to consolidate the power of bullies.

We have been told that the child in the womb is a blob of tissue, not like you and me. But we know this is not true. We know the biology. We have seen our children’s sonograms from their earliest days in utero. This is how all of us begin our lives.

We have been told that being allowed to kill our unborn children is a fundamental right, without which we would be unable to enjoy the fullness of life in these United States. But we know this is not true. We know that, when the more powerful are granted the power of life and death over the powerless, no one is safe. We know this is the opposite of the rule of law.

To get us to accept this, we were told that this has nothing to do with polygamy, or incest, or pedophilia. But we know that this is not true. The reasoning that makes it possible to redefine sex and marriage can also justify polygamy, incest, and even pedophilia—and we know, just from watching TV, that people have already been making precisely these arguments.

We have been told that religious liberty means nothing more than freedom to worship in private, because it is not rational. But we know that this is not true. The Founding Fathers knew this was not true. There is nothing irrational about our lives being informed by our deepest beliefs, especially a belief in a Creator.

We have been told that the Constitution must be interpreted as a “living” document, that we cannot be bound to the meaning of words that the authors intended and the states ratified. Rather, the words must be reinterpreted with fresh and novel meanings for a new age. But we know this is not true. A law that does not retain its meaning is worthless.

We have been told that simply to be white or male or heterosexual is to be privileged. But we know this is not true. Whatever privileges you may have, the mere fact of being white or male or heterosexual is no privilege when you have no job, no prospects, and no way to support a family that depends on you. Yet you continue to take abuse for the fact of being white or male. You would treat everyone, of any race or creed, of any sex or nationality, with equal respect. Why don’t you receive that respect in return?

We have been told that big government socialism is a system that can work, and that it enhances the lives of those who live under it. But we know this is not true. When governments take over the means of production, human dignity suffers as human initiative is snuffed out. Freedoms are lost, and economies are stalled. People are expected to contribute to the community, but they lose any sense of being neighbors. Individualism increases since “the government” will take care of everything. The result is not increased material well-being but poverty for all.

What has produced the America that we know and love? What kind of America causes the world to flock to its shores in joy and hope?

It is an America with a constitutional rule of law that prevents the powerful from abusing the powerless by guaranteeing our rights to life, liberty, and the pursuit of happiness—an America that safeguards our freedom of religion, conscience, speech, and press, and that guarantees the protection of private property, giving us the opportunity to use our God-given talents, initiative, and hard work to make a life for ourselves and our families.

It is an America that recognizes that families, based on the marriage of a man and a woman, are the fundamental building blocks of any society; they are the first place where we all come into being, where we all learn how to live and love and suffer and rejoice both as individual human beings and as people who need others.

It is an America where every innocent human life is guaranteed protection in law from those with power over it, from conception until natural death.

It is an America that protects all who step on her shores in their duty to worship God, however they understand God, and to live publicly in accordance with the requirements of their religion.

It is an America that judges people not by the color of their skin, nor by the position of their birth, nor by the number of X’s in their chromosomes, but by the content of their characters and actions.

It is an America that recognizes the right to form all sorts of associations that help us to live well as human beings. It is an America that recognizes that these associations—the family, the business, the church, the charity, the team—are the reason for the existence of government, not the other way round. Government exists to help us, as individuals and in associations, to pursue our own lives. Government isn’t “all of us working together.” Government protects us so that we can work together in the ways we choose.

It is an America that values the truth above all.

I am. And if this is the America you want, let me be your champion this November. Together, we can make America her truest self.

Stephen J. Heaney is Associate Professor of Philosophy at University of Saint Thomas in Saint Paul, MN. Reprinted with permission from The Witherspoon Institute.