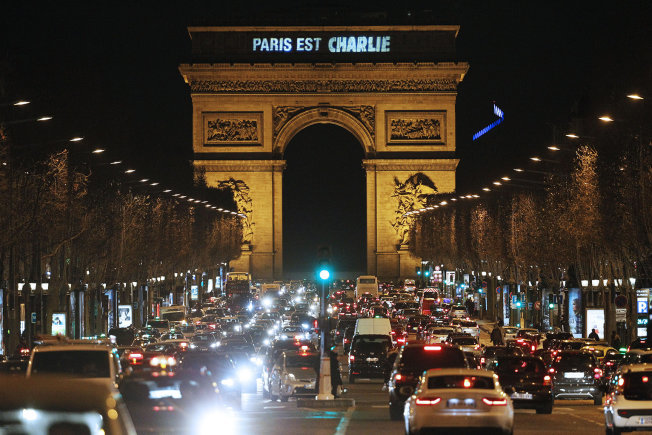 When I went out to my local newspaper shop around the corner to buy Charlie Hebdo, the friendly student who’s been helping out there in the afternoons for years told me she could set aside a copy for me somewhere around the end of January. “We’re getting twenty copies a day, and the waiting list is over 300.” The first million – yes, million! – copies of the first issue of the “satirical weekly” to come out after the bloody terrorist attack just one week ago were sold out in the whole of France shortly after ten o’clock this Wednesday morning; another two million, or more, are being printed non-stop. I was dumbfounded.

Why? Well, I live in a quiet, residential part on the Left Bank of Paris, far from the trendy districts where wealthy, left-leaning “bourgeois-bohêmes” congregate in droves, making sure that the French capital will have socialist mayors for many years to come. My “arrondissement”, on the contrary, happens to be mostly expensive, sedate, and seemly, and it votes massively for the respectable right of center candidate at all elections. No fantasy here. Embassies, ministries, and international institutions are plentiful. Children are (usually) polite and neatly dressed, and old ladies of reduced means and aristocratic bearing who have lived here for decades enjoy their daily chat with the baker, the butcher, and the Tunisian shopkeeper who delivers their groceries from his tiny shop across the road.

So who could possibly be buying all those copies of a blatantly Trotskyist, obscene, blasphemous, and ugly magazine whose front page this week portrays a caricature of Mohammed, complete with a hardly subliminal portrayal of his head as a male sexual organ, bearing the official slogan “I am Charlie” and saying: “All is forgiven”?

True, there has been enormous media pressure to make the exceptional edition of Charlie Hebdo an unprecedented success. The paper was dying because of the steady decline of its readership, selling less than 10,000 copies a week. Ironically, the horrible death of four of its best-known cartoonists and six other members of its staff is giving it a new lease on life. Especially now that saying “Je suis Charlie” – I am Charlie – has become an epitome of Frenchness. One journalist, Nathalie Saint-Cricq, even suggested “hunting out” and “curing” those who are sufficiently insensitive and anti-Republican not to adopt the phrase.

So when I told the friendly girl at the newsagent’s I wanted to make it absolutely clear that I only wanted to buy Charlie Hebdo for professional reasons, she was more than a bit surprised. “Well, at least you’re frank about it,” she said. “Charlie publishes cartoons against Christianity that are ten times more obscene, blasphemous and pornographic than the drawings on Islam,” I said (some of them, it must be said, were deeply offensive to Muslims). She wasn’t convinced. “Perhaps it’s just because they hurt you more,” she said. We agreed to disagree.

But Charlie’s own solicitor admitted the fact, when Charlie Hebdo was unsuccessfully prosecuted by Islamic associations for having published the Danish cartoons of Mohammed. They were asking to be “treated on an equal footing” with other religions in France: mainly Catholicism. Lawyer Richard Malka said that was the last thing they should do. “Do you want to be treated equally? Really, don’t ask for too much, we’re going to give it you! Do you really want to be treated equally? How can you seriously be asking for that? What I can tell you is that even at Charlie Hebdo, they wouldn’t dare to do a tenth of that against Mohammed. No one in this country would dare to do a tenth of that against the Prophet Mohammed!”

I cannot decently describe here how Charlie Hebdo portrayed the Holy Trinity on its front page, I need only say that drawing was published during the debate about same-sex “marriage,” in which the libertarian and anarchistic writing team of the paper enthusiastically took sides with the destruction of the mainstay of society.

When the news of the barbaric murders at Charlie Hebdo came out on January 7th, and the whole of France was in a state of shock, I was in Strasbourg for the hearing on the case of France’s “Terri Schiavo,” Vincent Lambert, a tetraplegic man in a minimally conscious state whom doctors want to deprive of enteral nutrition and hydration in order to make him die. More about that in a later article. If the murderous attack on a team of provocative and anti-religious journalists was barbaric and horrendous, isn’t Western societies’ increasing readiness to get rid of the weakest another example of man’s violence against his fellow man?

As fate would have it, I ran into a newsstand that was showing posters of Charlie’s latest special edition, which I had seen weeks before and hoped not to have in my sight again. Under the title “The true story of the child Jesus,” it showed a drawing of the Virgin Mary just after having given birth to the baby Jesus; he was lying on squatting latrines. “God forgive them,” I thought. But survivors of the terrorist attack are making clear they are inconvenienced by assurances of prayer and support from the Catholic Church, and by the ringing of church bells the day after the gunning down of their friends.

That – God forgive them, please… – is Charlie Hebdo. That is the paper that France is identifying with. That’s the misguided “liberty of expression” all are proclaiming to revere and want to defend as the highest of Republican values. That is why hundreds of copies of Charlie Hebdo are being sold in the most bourgeois quarters of Paris.

The AGRIF was to lose most of those battles as judges upheld humorists’ right to caricature. As Charlie Hebdo said: “Blasphemy is a constitutive element of democracy.” In other words, in a deeply secularist nation such as France, no religious right or public proclamation of the Christian faith can stand up to the superior rights of atheism and rejection of God from the public sphere. (On the other hand, and this is a paradox, politicians or teachers who dare question the mores of Mohammed and the aggressive conquests of Islam in history are deemed to be “racist” and “discriminatory.”)

Now prosecuting someone who deeply offends you in what you hold to be most sacred through a judicial procedure is certainly a civilized manner in which to cry for justice and respect. Gunning down ten journalists and newspaper staff who, besides expressing open, albeit prudent criticism of Islam, choose to offend religious Muslims by transgressing the Islamic ban on portraying “the Prophet,” is a tragic illustration of the violence of the Quran which orders that blasphemers shall be executed. Many Islamic countries, allies of the West, implement the Sharia to the letter. In Paris, radicalized Muslims took that violent law into their own hands. In the ethnic suburbs of France, many Muslim youths applauded.

That fact, together with the spiritual emptiness of France, where regular Catholic religious practice has fallen to less than 5 percent, is a reason for deep concern. But what is French society giving to these Muslim youngsters – most of whom spent years in the public secular National Education system – if not the example of a nation that has abandoned its faith? What kind of peace can we expect when legal abortion, deemed a “fundamental right” no later than November, kills over 600 unborn babies every day? Does Islam despise Western countries? Islam still remembers it once covered Spain, and that it reached Poitiers in the middle of France. But then it fought the Christian faith. Sadly, in proclaiming a sort of national vindication of blasphemy without ever posing the question of truth, France at least is giving more reasons to Muslim radicals to hate her.

A few million copies of Charlie Hebdo later, and after the gigantic Parisian March that saw a strange “united Europe” proclaiming “I am Charlie” around François Hollande, Angela Merkel, David Cameron, and so many others, I wonder how they will react. Condemning terrorists is one thing. Turning a country’s fear, indignation, and national solidarity into an ideological and secularist demand is another.

But François Hollande desperately needed it. 2013’s “Manif pour tous,” which saw hundreds of thousands and even millions of people across France stand up for natural marriage, left him with the image of a splitter of what was left of the nation’s unity. Now he can say that he reunited France in an unprecedented demonstration of secularism and “Republican unity.” Few are those who remember the French Republic was born through Terror and the persecution of the Catholic faith.

I have my idea about the affluence measured on Sunday’s Paris March under the slogan “I am Charlie.” Comparing the length, occupied space and duration of the March with those of several of the “Manifs pour tous” clearly shows the police gave comparatively much larger figures last Sunday (up to 1.7 million) than in January and March of 2013 when the culture of life was being defended in the avenues of Paris. Those demonstrations started at 1 p.m., and at 7 p.m. people were still flocking to their endpoints. On Sunday, the “March” commenced at 3 p.m., and I saw many marchers already returning home through my part of town by 5:30.

These people, knowingly or not, are depriving themselves of the sole possible “arm” against radicalized Islam. Radical Islamists (and all Muslims who have massively entered the West and have found it empty) desperately need the treasure that expands when it is shared, a call to discover the truth of the love of Christ for which they, as human beings, are yearning despite themselves. Only that can stop the hatred to which they are devoting their lives.