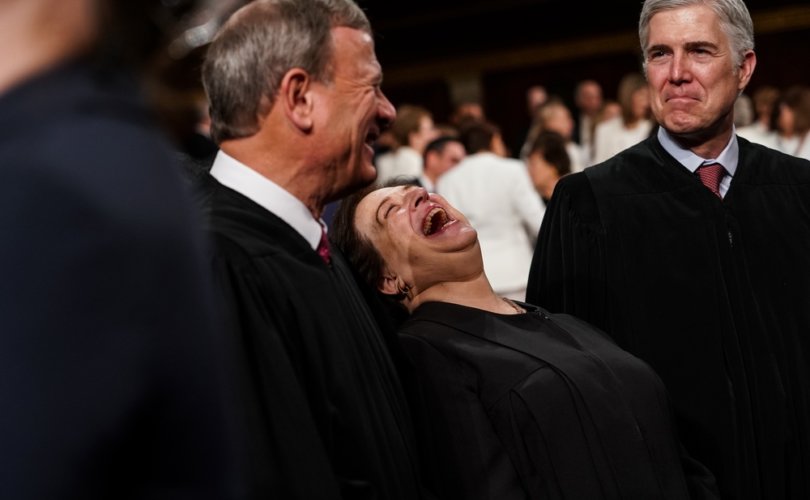 Supreme Court Justices John Roberts, Elena Kagan, and Neil Gorsuch attend the State of the Union address in the chamber of the U.S. House of Representatives at the U.S. Capitol Building on February 5, 2019 in Washington, DC. Photo by Doug Mills-Pool / Getty Images

June 30, 2020 (LifeSiteNews) – We cannot say that the brutal Supreme Court June Medical Services v. Russo decision was a surprise to most veteran pro-lifers. The June 29 decision struck down a state’s requirement that abortionists have admitting privileges at nearby hospitals for cases of botched abortions. Regulations hoping to prevent the death of women from abortion complications were seen as an undue burden on women who seek abortions.

The decision confirms what we already know about our judiciary: The killing of babies has priority over the lives of the preborn…and their mothers. Such has been the consistent message since 1973.

Activists may have hoped that the justices might have conceded in this minor point since it involved the most elementary safety measures. What made this ruling particularly painful was that the swing vote in the 5–4 decision came from the supposedly conservative Chief Justice John Roberts. However, pro-lifers no longer expect justice from the Supreme Court. They have learned the hard way that they are much more likely to receive betrayal.

Pro-lifers expect betrayal because they know that the Supreme Court does not recognize a supreme law—God’s Law upon which all human law is based. The justices prefer to dabble in liberal law theories, legal fantasies, and meaningless technicalities than to acknowledge a Divine Lawgiver. They craft their laws to adjust to an increasingly immoral society that needs such decisions to justify and legitimize its unbridled passions.

Nor is justice to be expected from the justices. Even a child knows the most elementary notions of justice found in the moral law. Saint Paul says it is “written on our hearts.” We know that killing babies is wrong and unjust. It does not require a law degree to understand this elementary truth. Yet the justices of the highest court in the land dare not affirm this basic truth. They prefer to betray it and follow the world’s sinful ways.

Thus, the Supreme Court decision is yet one more betrayal in a treacherous fight that has spanned nearly 50 years. The decision reflects the complicity of those in other fields that also have not the courage to confront a world gone awry. Pro-lifers know well the silence of those in the political, business, and religious establishments that join forces with or fail to speak out against the culture of death.

This latest decision mocks the countless Americans who now fight against abortion. It exalts iniquity and creates a separate law for those who slaughter the unborn.

Some might think such betrayal would discourage the pro-life cause.

Far from discouraging pro-lifers, it serves to make them more determined. The constant betrayals over the years have callused the movement. Pro-lifers have developed thick skins, taking such setbacks in stride, and continuing the fight.

From the very beginning, the pro-life movement has fought against all the odds. Such was the triumph of the sexual revolution of the 1960s that pro-abortion advocates calculated the pro-life resistance would gradually fade away.

Indeed, in the early days, we could count on few legislators, clergy, or leaders to appear on the pro-life stage. Few dared to confront the pressure to conform to liberal norms.

With grit and determination, pro-life activists have fought over the decades. Today, the movement has grown and become almost mainstream. Vast sectors of the public question procured abortion. We have transformed the debate from that of “women’s health” to a moral issue. Thus, nearly 50 years after Roe v. Wade, the controversy still rages.

Recourse to the rejected lawgiver

This long history of facing the odds allowed the movement to accomplish amazing things. It forced activists to appeal to a higher authority. The pro-life cause has won many important legislative and political battles, but it has run on miracles right from the beginning.

Indeed, we did not close 1,707 abortion centers with the “normal means” by which these things are done. There were no government interventions, clerical excommunications, and few business boycotts to make the way easier. Undaunted, countless pro-life activists on the ground prayed and struggled. They had recourse to the Divine Lawgiver whom the Court justices rejected.

The pro-life movement also turned the tables upon the Court justices, who refused to uphold the moral law by condemning abortion. The judges are now the judged. Abortion has become a pivotal issue by which judges are judged.

Tens of millions of Americans also used abortion to judge politicians, political parties, movements, and currents. It is a polarizing litmus test that brings back the moral law into society. The issue has proven an immense obstacle to those who want to destroy all legal restraints and throw our nation into ruin and anarchy.

The abortion fight will continue despite the betrayals. To the degree that human solutions appear less likely, the more we must look to supernatural solutions to aid us in this moral fight for America’s soul. The latest ruling confirms what we already know: Expect setbacks and betrayals, but God always triumphs in the end.