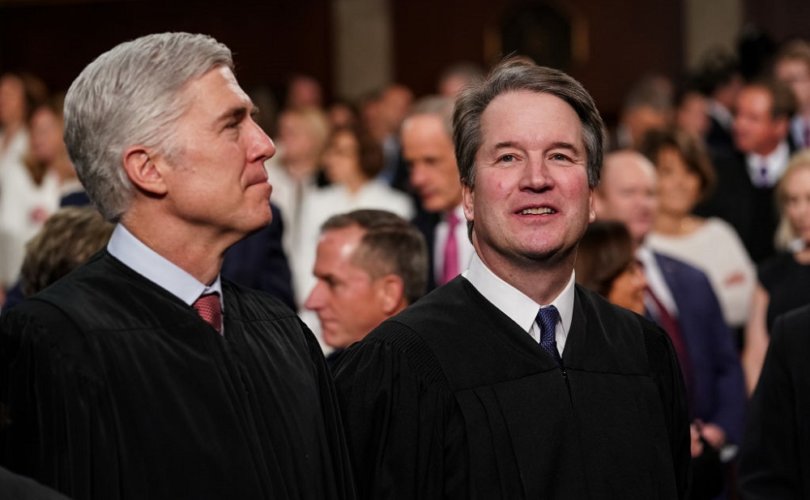 June 17, 2020 (CatholicCulture.org)  —  The US Supreme Court, which arbitrarily redefined human life in the Roe decision, and redefined marriage in Obergefell, has now redefined sex. There’s a frightening consistency to these decisions, a logic explained by Lewis Carroll in Through the Looking Glass:

“When I use a word,” Humpty Dumpty said in a rather scornful tone, “it means just what I choose it to mean — neither more nor less.”

“The question is,” said Alice, “whether you can make words mean so many different things.”

“The question is,” said Humpty Dumpty, “which is to be master — that’s all.”

In the Bostock decision, the Supreme Court interpreted the Civil Rights Act of 1964 to mean things that, in all likelihood, not a single member of Congress intended at the time the bill was enacted. At any time in the 56 intervening years, Congress could have amended that Act, or passed other legislation, to outlaw discrimination on the basis of sexual orientation. Congress never did so. This decision is a pure act of judicial legislation.

But this is nothing new. With Obergefell, the Court had legalized same-sex marriage without even a nod at Congress. In that case the Court had discovered the right to homosexual marriage in the “emanations from penumbra” of the Constitution. As Kevin Williamson wrote in National Review:

The gentlemen who wrote the Constitution did not get around to enfranchising women or abolishing slavery, but they snuck in a constitutional right to gay marriage that we’ve somehow overlooked for 228 years or so: No mentally functional adult, regardless of his views on gay marriage, should be expected to pretend that that is true.

Williamson pinpoints the most important argument against the Bostock decision: not that it is a usurpation of Congressional authority (although it is), nor that it will produce disastrous public policy (although it will), but that it is patently false. In this calamitous decision, six members of our nation’s highest court signed their names to a lie.

It’s manifestly untrue that when Congress outlawed discrimination on the basis of sex, the lawmakers intended also to outlaw discrimination on the basis of sexual orientation or gender identity: concepts that had not even been introduced into the language of the American polity at that time. But again that is not the key point. Still more important, it’s untrue that the word “sex,” which denotes physical characteristics, can be stretched to include behaviors and attitudes.

With very rare exceptions — which are universally recognized as medical anomalies — human beings fall neatly into one of two categories. “Male and female He created them,” the Book of Genesis tells us, and science confirms that report. To discriminate on the basis of sex means to discriminate against someone because of his or her chromosomes.

But now the Supreme Court has cast aside the evidence of science in the matter of sexuality — just as, in 1973, the Court cast aside the evidence of science on the question of when human life begins. In each case, science and Scripture and settled law and centuries of tradition all pointed in one direction, yet the Supreme Court struck out on a different route.

To deny reality is to flirt with insanity, and the Court’s flights of illogic have spawned many other nonsensical judicial rulings and public policies. The Bostock decision is certain to cause regulatory nightmares, inviting new abuses and threatening ordinary civil liberties. Helen Andrews explored the unhappy prospects in The American Conservative:

Under Bostock, an LGBT employee could allege a hostile work environment if a coworker expressed the wrong opinion about Prop 8 or said he believed a person’s sex is determined at birth. Some employers are already justifying firing workers who won’t use someone’s preferred pronouns because discrimination law requires it. Misgendering, they say, is harassment.

Bostock, like Roe and Obergefell — and for that matter like Dred Scott — threatens the stability of our Republic, because in all these cases the Supreme Court has aggravated serious divisions among the American people. It might have been possible for skilled statesmen to reach an amicable resolution of our differences (although I see no such statesmen on the political horizon, and I wonder whether a peaceful resolution is still possible). By coming down squarely on one side of the deep divide, the Court has short-circuited the normal political process a nasty backlash is now almost unavoidable.

We are a house divided. Still worse, as long as the Supreme Court’s decision stands, we as a nation are living a lie. Our laws and our Constitution, as interpreted by our highest court, no longer satisfy the minimum demands of logic and sanity. When the people can no longer respect the law — can no longer predict or understand the law — the regime cannot survive.