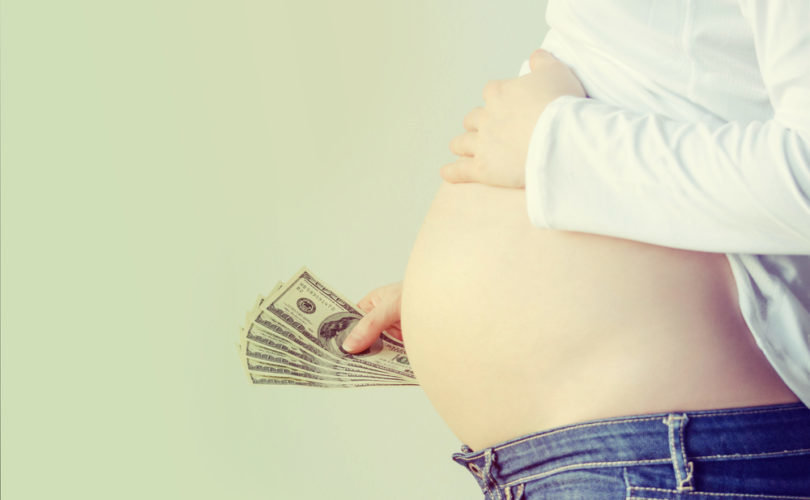 Many supporters of same-sex marriage are still wary of surrogacy. It’s one thing to allow for these couples to marry. It’s another thing to create a market for children.Shutterstock

July 28, 2015 (ThePublicDiscourse) — Just days before Irish citizens voted in favor of same-sex marriage in May, a headline in the Independent warned: “surrogacy fears could sink ‘Yes’ campaign.” During the final weeks leading up to the referendum, government leaders and advocates of the “yes” vote to redefine marriage tried to distance themselves from the issue of surrogacy for fear that the two issues might be conflated. Such behavior offers a telling though little discussed insight that’s particularly applicable for our own nation, especially now that the Supreme Court has ruled that there is a constitutional right to same-sex marriage: A growing number of LGBT activists actively oppose surrogacy, even though gay men are the primary users of the practice.

Surrogacy is not legal in Ireland, though some commentators believe that the acceptance of same-sex marriage will lead to its inevitable acceptance. In an interview leading up to the vote in Ireland, Justice Kevin Cross, the head of the Referendum Commission, sought to calm fears that the referendum would lead to surrogacy, promising that there is no automatic right to have children in Ireland, and therefore no automatic right to surrogacy. But some are skeptical.

A Constitutional Right to Procreate?

The confusion can be traced back to a 1991 case, Murray v. Ireland, in which the high court effectively held that there is a constitutional right to procreate. While many on both sides of the referendum argued that this decision was referring to natural procreation, the decision has already been used to promote donor conception. It’s understandable, then, that many were fearful that a “yes” vote would open the floodgates to a practice that many Irish voters do not support. Mothers and Fathers Matter—the leading civic group opposing the same-sex marriage referendum—launched a campaign that papered the country with ads and posters of a young, concerned toddler with the following slogan: “Surrogacy?: She Needs Her Mother For Life, Not Just For Nine Months. Vote No.”

In response, columnist Carol Coulter took to the pages of The Irish Times to declare that “surrogacy has nothing to do with same-sex marriage.” A supporter of the referendum, Coulter rejected the notion that its passage would allow for surrogacy. She went on to sympathize with those who oppose surrogacy. “There are good reasons for their concern about the use of surrogacy in family formation, particularly in relation to the possible exploitation of the surrogate mothers and inattention to the rights of children to their identity,” she acknowledged.

Earlier this year, gay fashion designers Domenico Dolce and Stefano Gabbana made international headlines when they spoke out strongly against surrogacy and third-party reproduction. In a now notorious interview, they remarked: “The only family is the traditional one. No chemical offspring and rented uterus. Life has a natural flow; there are things that cannot be changed.” While their comments were met with fierce opposition by some members of the LGBT community, they are nonetheless joined by a growing coalition of gay men and women who oppose surrogacy.

Two prominent organizations in France—La Lune, L’Association Strasbourgeoise de Femmes Homosexuelles, a group of lesbian women, and Les Hommen, a group of gay men—have been vocal opponents of surrogacy. In the United Kingdom, transgender political activist Tara Hewitt and noted commentator and lesbian feminist Julie Bindel, hardly allies on other issues, have offered some of the most vociferous critiques of surrogacy.

In a recent column, Bindel argued:

The accelerating boom in surrogacy for gay couples is no victory for freedom or emancipation. On the contrary, it represents a disturbing slide into the brutal exploitation of women who usually come from the developing world and are often bullied or pimped into selling their wombs to satisfy the selfish whims of wealthy gay or lesbian westerners. This cruelty is accompanied by epic hypocrisy. People from Europe and the USA who would shudder at the idea of involvement in human or sex trafficking have ended up indulging in a grotesque form of ‘reproductive trafficking’.

Here in the United States, people such as Robert Oscar Lopez, a bisexual man and the son of a lesbian, have decried the practice of surrogacy for both heterosexuals and homosexuals. According to Lopez, “regardless of whether the mother consents to losing her child, the child cannot consent.” He has harshly criticized gay men who demean women, using them only for their reproductive capacities.

Despite this growing disapproval of surrogacy among the international LGBT community, proponents of surrogacy know there is a ripe market in the gay community and much money to be made. Major international surrogacy brokers, such as Circle Surrogacy and ConceiveAbilities, have specific marketing programs targeted at gay men. Similarly, conferences such as “Families Through Surrogacy” aim to capitalize on this demographic.

The Next Frontier: “Family Equality”?

Hours after the Obergefell decision was handed down, University of California Irvine law professor Douglas NeJaime took to the pages of the Los Angeles Times to lament that “marriage equality doesn’t immediately or necessarily erase cultural and legal attachments to biological, dual-gender parenting.” In other words, those of us concerned about assisted reproductive technologies and their very real harms to both women and children need to simply rid ourselves of such quaint “attachments.” As skeptics in Ireland feared and the naïve in the United States are now realizing, “marriage equality” inevitably leads to the push for “family equality”—almost always by artifice.

even though marriage equality doesn’t immediately erase all attachments related to biological, dual-gender child rearing, it points us in the right direction . . . the majority [of the Supreme Court] affirmed a model of parenthood based on chosen, functional bonds rather than biology alone.

In other words, the movement for “family equality” will forever diminish the significance of our biological ties. The state must now act in a way that both accepts and promotes a non-biological vision of parenthood and family. Thus, the market for eggs, sperm, and wombs must be expanded.

Many states will soon be under pressure to follow the example of California and Maryland, where the state legislatures have passed laws that would that mandate insurers provide “infertility” treatments to same-sex couples. In 2013, when California enacted its legislation, Assemblyman Tom Ammiano boasted: “Reproductive medicine is for everybody’s benefit. To restrict fertility coverage solely to heterosexual married couples violates California’s non-discrimination laws. I wrote this bill to correct that.” In a recent article in JAMA Internal Medicine, Brown University physician Eli Y. Adashi praised the Maryland bill and encouraged other states enact similar legislation. According to Adashi, “Building a family is a universal human principle shared by single individuals and unmarried opposite-sex couples, as well as gay and lesbian couples.”

As for the children who will be created from these arrangements—the children who long to know and be known by their biological parents—their needs must be sacrificed for the desires of same-sex couples who long to be parents. To confer dignity upon these adults, they demand, the law must privilege those aspirations. The sober and honest-minded reasoning of Irish supporters of same-sex marriage who recognized this threat, along with courageous voices like Lopez, Bindel, Dolce, and Gabbana, serve as a much needed and powerful witness of what the world of “family equality” will ultimately yield—but their warnings cries are increasingly being silenced by powerful forces with great wealth in their arsenal.

While many consider the contest over same-sex marriage in the United States to have been settled by the Supreme Court, the debate over surrogacy is just beginning. If the events in Ireland offer one lesson, it’s this: Many supporters of same-sex marriage are still wary of surrogacy. It’s one thing to allow for these couples to marry. It’s another thing to create a market for children. LGBT activists who oppose surrogacy serve to remind us that this community does not speak with one voice on this matter. Lawmakers and citizens alike in the United States would be wise to remember this, as well.

Christopher White is the Director of Research and Education at the Center for Bioethics and Culture and an original signer of Stop Surrogacy Now, an ethnically, religiously, and culturally diverse coalition opposed to the exploitation of women and the human trafficking of children through surrogacy.