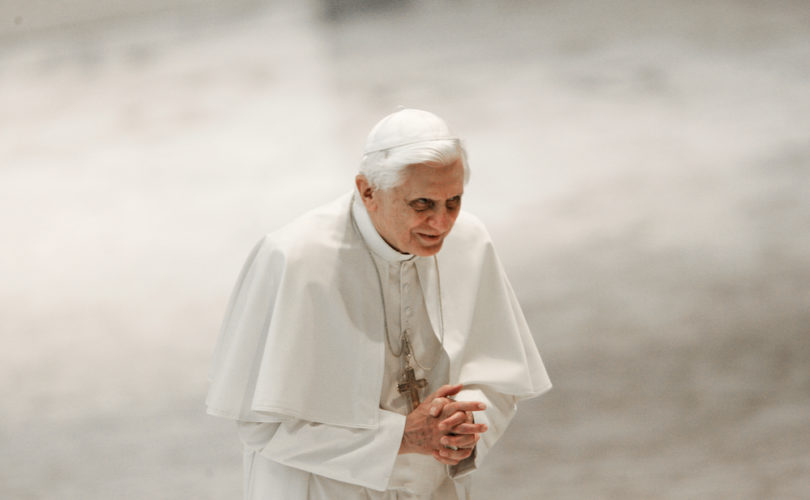 September 29, 2015 (LifeSiteNews) — While correcting local media reports, the Swiss bishops today confirmed the existence of the so-called “mafia” of bishops that aimed to counter the influence of Cardinal Ratzinger during the pontificate of John Paul II.

The confirmation came amid intense discussion in Switzerland about the question of the now well-known group of cardinals, called the “St. Gallen Group,” about which Cardinal Godfried Danneels recently made some disturbing, even embarrassing revelations.

This morning, the local radio station FM1 Today in Sankt Gallen, Switerland, reported on the alleged secret meetings of this “St. Gallen Group” that supposedly worked both on making Pope Benedict XVI resign and on getting Cardinal Jorge Bergoglio then elected for the Papal office. As sources for their claims, the radio station cited a new biography about Bishop Danneels, as well as a candid public statement that the cardinal himself made.  Summing up their claims about this seeming conspiracy, the radio station said:

Karim Schelkens, historian and co-author of the biography, said in an interview that the election of Bergoglio has been without doubt prepared in St. Gallen in the middle of the “mafia” and also that Ratzinger resigned because of it [this “mafia”].

For some reason, only a few hours later, that same radio station softened some of its claims. The second report, entitled “There were meetings, but no secret meetings,” now said: “It is wrong to put the St. Gallen circle of Cardinals in the connection with the resignation of Pope Benedict, since the meetings did not take place any more after the year 2006.”

The official website of the Swiss Bishops' Conference, kath.ch, subsequently published today their own article about this matter, pointing out the fact that the Diocese of St. Gallen, whose bishop is the president of the Bishops' Conference, has now made a public statement refuting the claims of the radio station.

On the website of the Diocese of St. Gallen, a summarizing statement quotes the different radio reports and then refers to its own statement. This statement is mainly based on the witness of the former bishop of St. Gallen, Bishop Ivo Fürer. The statement says:

This group [St. Gallen Group] met on a regular basis in St. Gallen for the sake of a friendly exchange. The rest is speculation, as will become clear in the following sentences: […]

A private circle met on a regular basis from 1996 until 2006. It was now-deceased Cardinal Carlo Maria Martini and the then-bishop of St. Gallen, Ivo Fürer who initiated these meetings. Neither Cardinal Carlo Maria Martini nor Bishop Ivo Fürer were at the time members of the Council of the European Bishops' Conferences (CCEE), but the members of the circle of friends had first met in part through the CCEE. Some of the bishops and cardinals who were friends desired a continued exchange among each other. Of course they also spoke about the situation in the Church at their yearly gatherings in St. Gallen. They also spoke – when the health of Pope John Paul II was continuously declining – about the question as to which qualities a new pope should have.

During the election of Joseph Ratzinger (Pope Benedict XVI/2005/115 Cardinals), the cardinals who regularly met in St. Gallen had discussions during the pre-conclave. According to some reports, Cardinal Bergoglio already received a significant number of votes [at the conclave].

The election of Pope Francis in 2013 (115 Cardinals) corresponded to the goals of the group in St. Gallen – so it says in the biography of Cardinal Danneels. This is being confirmed by Bishop Ivo Fürer who never hid his joy about the election of the Argentine.

The official report of the Diocese of St. Gallen, therefore, has admitted that such a “St. Gallen Group” existed. Bishop Fürer also admits to his own approval of the election of Cardinal Bergoglio but insists that the meetings ceased in 2006. Ivo Fürer was Bishop of St. Gallen from 1995 until 2005. He was prominently involved, as its President from 1995-2009, with the Swiss Catholic Lenten Fund which has come under strong international criticism for its funding of LGBT activists, as well for its funding of the Swiss Institute for Pastoral Sociology whose president, Dr. Arnd Bünker, is himself an active promoter of the homosexual agenda.