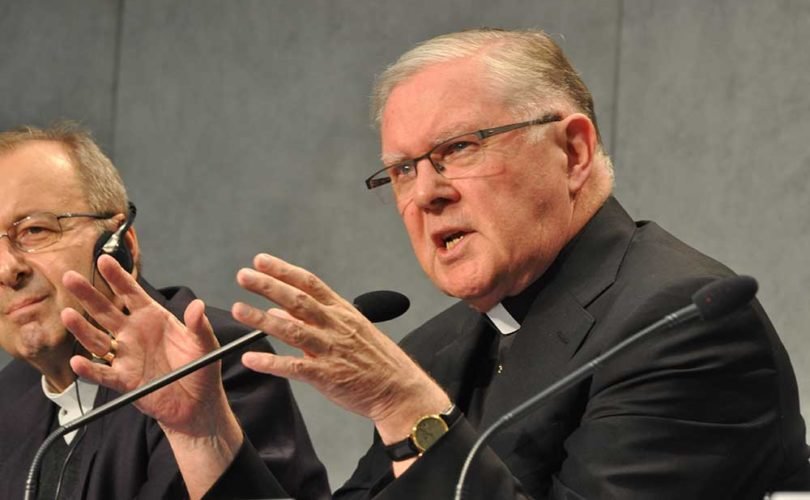 Archbishop Mark Coleridge of Brisbane, Australia who responded to LifeSite that the “love the sinner, hate the sin” distinction “no longer communicates” “in the real world”.Lisa Bourne/LifeSite

ROME, October 24, 2015 (LifeSiteNews) – Liberal reformers in the Church have lobbied for years to eliminate language from the Catechism and other church documents that articulate Church teaching that “homosexual acts are intrinsically disordered,” and that divorce and civil remarriage is “adultery.” Such liberal reformers hope the synod might provide just this window of opportunity. The prospect of a new more “pastoral” vocabulary on sexual sin in the Church has raised concern among faithful Catholics who see it as a Trojan horse to undermine the Church’s teachings.

Four main pieces of language are among those challenged:

This language-liberalizing agenda has become a more public part of synod discussion than its controversial at last year’s midterm relatio report that inserted language speaking of “positive elements” in homosexual unions. These linguistic controversies re-emerged as flash points from the very beginning of this month’s synod when Fr. Thomas Rosica of the Vatican Press office declared that “there must be an end to exclusionary language” and a new “language of mercy” especially in speaking about homosexuals and remarried divorcees.

Archbishop Mark Coleridge of Brisbane, Australia, gave a candid answer at the Vatican press conference on Tuesday to a question posed about the “love the sinner, hate the sin” distinction by LifeSiteNews’ editor-in-chief John-Henry Westen. Coleridge argued that the distinction “no longer communicates” “in the real world” where sexuality is “part of [your] entire being.”

Coleridge’s comments followed on remarks made on his blog:

The Catechism of the Catholic Church (2357), on the other hand, states:

“Basing itself on Sacred Scripture, which presents homosexual acts as acts of grave depravity, tradition has always declared that “homosexual acts are intrinsically disordered.” They are contrary to the natural law. They close the sexual act to the gift of life. They do not proceed from a genuine affective and sexual complementarity. Under no circumstances can they be approved.”

On this theme, letter to bishops in 1986, Cardinal Ratzinger (now Pope Emeritus Benedict XVI) had issued a Letter, approved by Pope John Paul II, to bishops “on the pastoral care of homosexual persons,” which said: “But we wish to make it clear that departure from the Church's teaching, or silence about it, in an effort to provide pastoral care is neither caring nor pastoral. Only what is true can ultimately be pastoral. The neglect of the Church's position prevents homosexual men and women from receiving the care they need and deserve.”

Coleridge also argues that using the word “adultery” for remarried divorcees needs to end. When a divorcee’s second “marriage,” is “enduring and stable and loving,” Coleridge sees this as significantly different from “a couple skulking off to a hotel room for a wicked weekend.” As a result, “'adulterous' is perhaps too sweeping,” in Coleridge’s opinion, even though identifying sin is “important, but in another sense it doesn't say enough. And I think what a pastoral approach requires is that we actually enter into what the synod is calling a genuine pastoral dialogue or discernment with these couples.”

The Catechism of the Catholic Church (2384) states:

Contracting a new union, even if it is recognized by civil law, adds to the gravity of the rupture: the remarried spouse is then in a situation of public and permanent adultery

A non-negligible number of synod fathers have expressed a desire to see Church’s pastors stop talking about the “indissolubility” of marriage.

Archbishop Cupich of Chicago agreed, saying the word “indissoluble” is “too juridical” and “too hard of a word to understand” in some cultures to describe marriage. The word “indissolubility”, in Cupich’s opinion, does not convety “the indissolubility of a wedding band, but handcuffs.” “People understand life-long fidelity,” he said, suggesting an alternative. Archbishop Martin of Dublin agreed with Cupich that “Most families would not feel that they live indissolubility; they live fidelity and closeness and care in ways we underestimate.”

Conjugal love involves a totality, in which all the elements of the person enter – appeal of the body and instinct, power of feeling and affectivity, aspiration of the spirit and of will. It aims at a deeply personal unity, a unity that, beyond union in one flesh, leads to forming one heart and soul; it demands indissolubility and faithfulness in definitive mutual giving; and it is open to fertility.

Some critics observe, however, that in replacing the language of “indissolubility”, with that of “faithfulness” is not to clarify, but to eliminate a key aspect of conjugal love in marriage, from marriage catechesis. In particular, the loosening of this language of “indissolubility” would also facilitate a desire on the part of innovators to “find the positives” in cohabiting and homosexual relationships where some measure of fidelity may exist, but a binding permanence is lacking, as the controversial midterm relation of last year’s synod included: “[the homosexual partners’] mutual aid to the point of sacrifice constitutes a precious support in the life of the partners.”

Dancing in the “Chains”

Lest we think Coleridge and other reformers were suggesting changing Church’s teaching in changing language and pastoral practice, Coleridge elaborated in an interview with Crux: “Keeping Church teaching intact can still open up a vast field of pastoral creativity…. Our danger, and not just the bishops but others in the Church, is to think that we’re condemned to dance in chains unless we can change the Church’s teaching.”

Coleridge’s understanding of Church teaching as “chains,” suggests an attitude that treats the moral law as the enemy of freedom rather than its guardian, contrary to the warnings in Pope St. John Paul II’s masterful encyclical Veritatis Splendor against “currents of thought which end by detaching human freedom from its essential and constitutive relationship to the truth” (VS, 4).

Coleridge, echoing Pope Francis’ calls for a more decentralized, “listening Church,” has said “the new language will have to require a new listening.” Archbishop Cupich has demonstrated what this “listening” might entail by including gay and lesbian couples in his archdiocese for input on family matters, and even recommending that gay and lesbian couples be able to speak at the Vatican synod on the family.

Coleridge must be doing some listening of his own at the synod, as he claimed in an interview with Crux, that there is “very strong support” by “something like 70/30” percent among the synod fathers, “for a less condemnatory approach, and language is at the heart of that.” This prediction was lent further credence this week when even the conservative Archbishop Charles Chaput surprised many by voicing support for scrapping the Church’s language of “intrinsically disordered.” “I think it’s probably good for the Church to put that on the shelf for a while, until we get over the negativity related to it,” Chaput told Crux, “That language automatically sets people off and probably isn’t useful anymore.” Chaput clarified, however, that “same-sex attraction is not part of God’s plan,” and any new language chosen “absolutely cannot” obscure this point.

Two Cardinals on the Pope’s committee of 10 who drafted the final report of the synod, which is yet to be made public, have also endorsed changes of language about sex and marriage, notably Cardinal Wuerl in an interview with the National Catholic Reporter, and Cardinal Gracias, in an interview with the dissenting “Catholic” LGBT lobbying group New Ways Ministry where he also called for an end to the language of “intrinsically disordered” to describe homosexual acts.

In the Circuli minori recommendations to the synod final document, two language groups issued apologies to the faithful for overly “judgemental” pastoral approaches up until present. The German language group, in a unanimous statement, begged “for forgiveness” for “misconceived efforts to uphold the Church’s teachings [which] time and again led to hard and merciless attitudes, which hurt people, especially single mothers and children born out of wedlock, people living together before or in place of marriage, homosexually oriented people and divorced and remarried people.” Spanish Group A also added, “We must stop continually scolding those who have failed in their first marriage without recognizing that we have some blame in that failure because we did not welcome them.”

Joseph Sciambra, an outspoken faithful Catholic with same-sex attraction, writing on his blog, criticized the soft-pedaling of the grave spiritual and physical dangers of homosexual activity at the synod as a spiritual form of medical malpractice: “I suppose they think we can’t cope with the reality of our [Catholics with same-sex  attraction’s] own diagnosis…We do not need to be protected [from the truth], we are not a special case, and we are not “gay;” we are simply among the duped and deceived, the sacrificed and the slaughtered upon the altar of this evil “gay” lie. However, what we are is “sick” and we need to be healed – we are looking towards the Church; in our lives as “gay” men and women, we had enough family members and “friends” who supported us, coddled us, and enabled our delusions; oftentimes, these unwitting accomplices remained silent or complicit because they were frightened – of us; we don’t need any more of those.”

The liberal synod fathers in Rome have begun a dangerous game. No amount of verbal acrobatics and watering down of hard truths of the faith will satisfy the enemies of the Church who hate not—in the words of Robert Royal– Catholicism’s choice of words, but its beliefs themselves.

With an “end to judging” and “love to all people,” Bishop Van Looy declared on Friday’s press conference that the synod “could be the beginning of a new Church.” For faithful Catholics who fear schism or heresy in the Church through decentralizing the language, doctrine, or laws governing the reception of Holy Communion to national bishops conferences, this breakaway “new church” may be already coming into existence headed by dissident bishops.

The concluding speech of Pope Francis seems to suggest an agreement with the alteration of language as he said that the Synod was about: “was about trying to open up broader horizons, rising above conspiracy theories and blinkered viewpoints, so as to defend and spread the freedom of the children of God, and to transmit the beauty of Christian Newness, at times encrusted in a language which is archaic or simply incomprehensible.”